In pro-choice Nevada, some back abortion restrictions 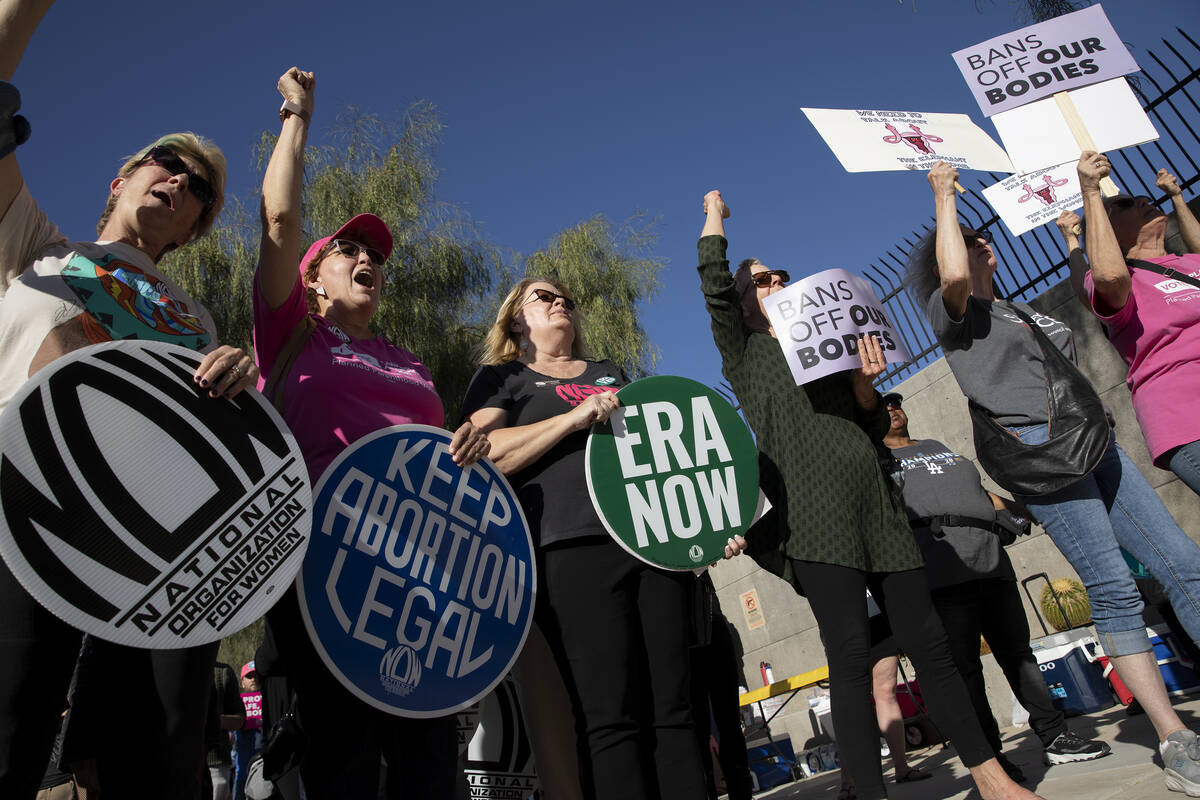 In this May 3, 2022, file photo, attendees of a rally in support of abortion rights chant “my body my choice” outside Lloyd D. George Federal Courthouse in Las Vegas. Planned Parenthood organized the rally in protest of the leaked U.S. Supreme Court draft decision that would overturn the 1973 Roe v. Wade ruling that legalized abortion nationwide. (Ellen Schmidt/Las Vegas Review-Journal) @ellenschmidttt 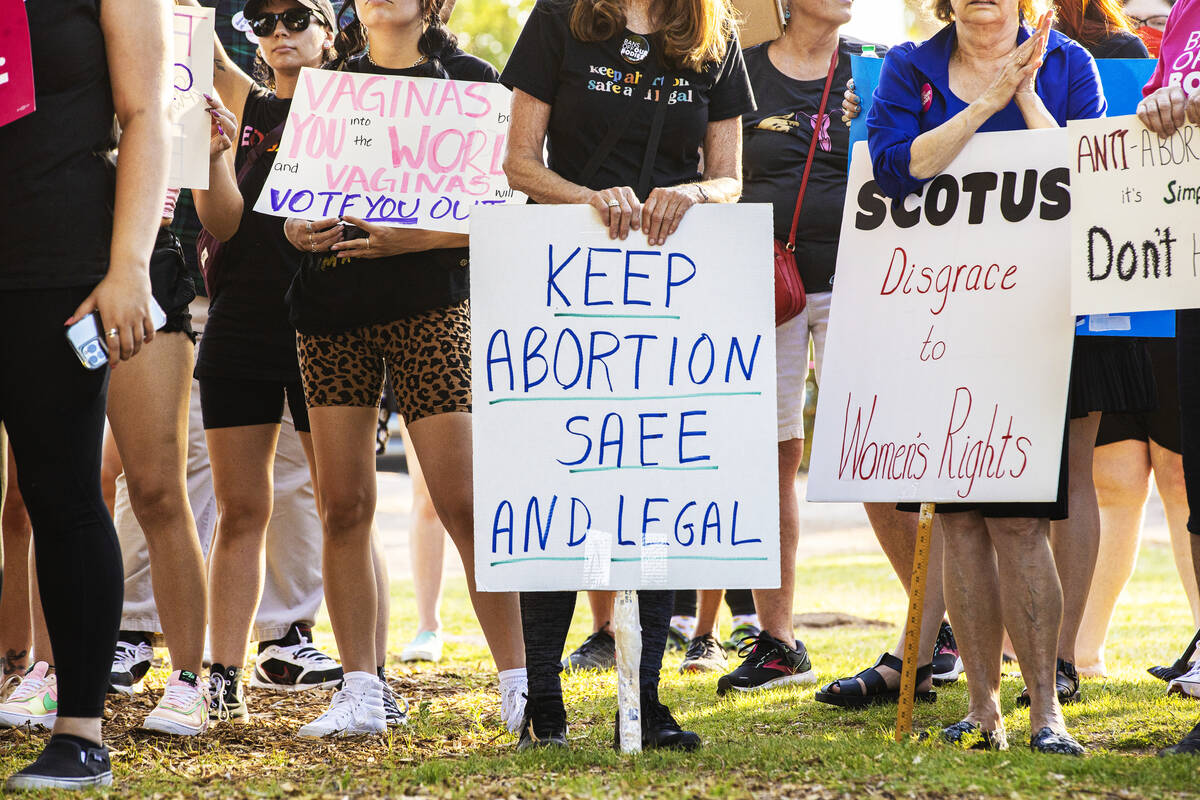 In this May 14, 2022, file photo, demonstrators hold signs during an abortion-rights rally organized by Planned Parenthood of the Rocky Mountains at Sunset Park, in Las Vegas. (Benjamin Hager/Las Vegas Review-Journal) @benjaminhphoto 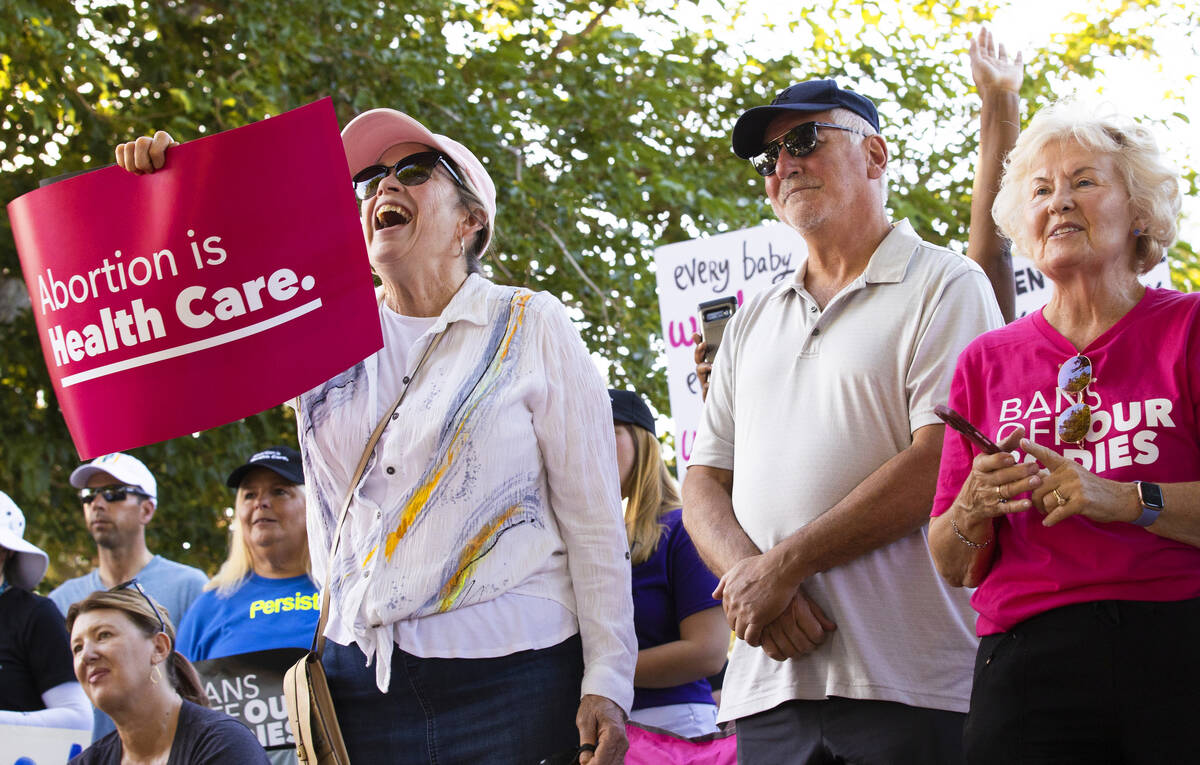 In this May 14, 2022, file photo, demonstrators hold signs during an abortion-rights rally organized by Planned Parenthood of the Rocky Mountains at Sunset Park, in Las Vegas. (Benjamin Hager/Las Vegas Review-Journal) @benjaminhphoto

So what does that mean for Nevada?

In the short term, not much, as Nevadans enshrined abortion rights into state law more than three decades ago, and undoing that law would take a significant political lift.

In the longer term, however, the fate of those protections in a post-Roe world remain less clear for Nevadans.

In 1990, Nevadans overwhelmingly voted in favor of a referendum on a state law that allows abortions within the first 24 weeks of pregnancy. The referendum vote effectively codified the Roe decision into state law, and ensured it can only be changed by another vote of the people.

“In the short run, things will stay largely the same. And I don’t think Nevada voters are going to change that policy,” said UNLV political science professor Rebecca Gill. “But it might be changed for us, in spite of the fact that the vast majority of the people in this country, as well as this state, don’t want that to happen.”

If the federal government were to pass a national abortion ban, it would supersede Nevada’s law, for example, Gill said.

With the national protections under Roe lifted, the focus of the debate is turning towards how individual states will handle abortion rights.

While the the 1990 referendum approval prevents the Legislature from changing or repealing the abortion law itself, lawmakers could put in place other restrictions, such as mandatory waiting periods, mandated counseling or requiring parental notification or consent.

That is where the pro-life groups plan to concentrate their efforts, said Melissa Clement, executive director of Nevada Right to Life.

Clement said there hasn’t been much talk about efforts to repeal Nevada’s abortion statute. But there have been discussions with political candidates about other kinds of abortion restrictions, she added.

“I think there is a tremendous amount of desire in the state to make our laws more common sense,” Clement said. “There’s very few Nevadans who don’t think parents should be involved.”

At a debate in May, Republican candidates for governor were asked if they would support other restrictions on abortions such as waiting periods. Clark County Sheriff Joe Lombardo, who won this month’s primary and advanced to November’s general election, said he would view everything “through a pro-life lens.” But when pressed by moderators if there was anything specific he might consider, Lombardo said “not at this time.”

Meanwhile, the Democratic incumbent Lombardo will face in November, Gov. Steve Sisolak, has been firmly entrenched on the pro-choice side, and said the court overturning the Roe decision “would be devastating for millions of women across the nation.”

“In Nevada, we’ve made sure the government stays out of the personal decision of if, when, and how to start a family – just as it should be. As long as I am governor, Nevada will continue to protect reproductive freedom,” he said in a statement.

While Republicans and pro-life groups eye additional abortion restrictions post-Roe, the majority of Americans lean the other way on the issue.

Americans’ views on abortion have remained relatively consistent over the last several decades and, if anything, have shifted slightly in favor of abortion protections, according to Gallup polls dating back to 1996.

Nevada’s 1990 referendum received overwhelming approval by voters, with more than 63 percent of the vote that year.

“The polling is clear that the reason that anti-abortion progress has been made has been because there’s been a highly motivated minority of people who were fighting against abortion access,” said Gill, the UNLV professor. “But if it’s a referendum, you don’t get extra votes for being extra passionate about it.”