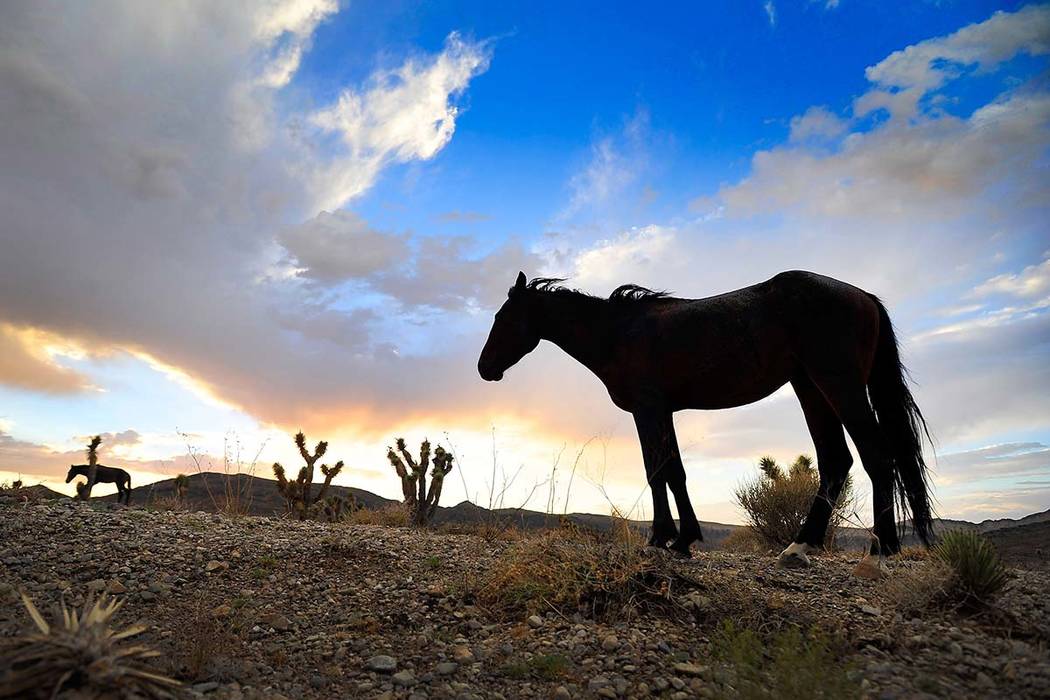 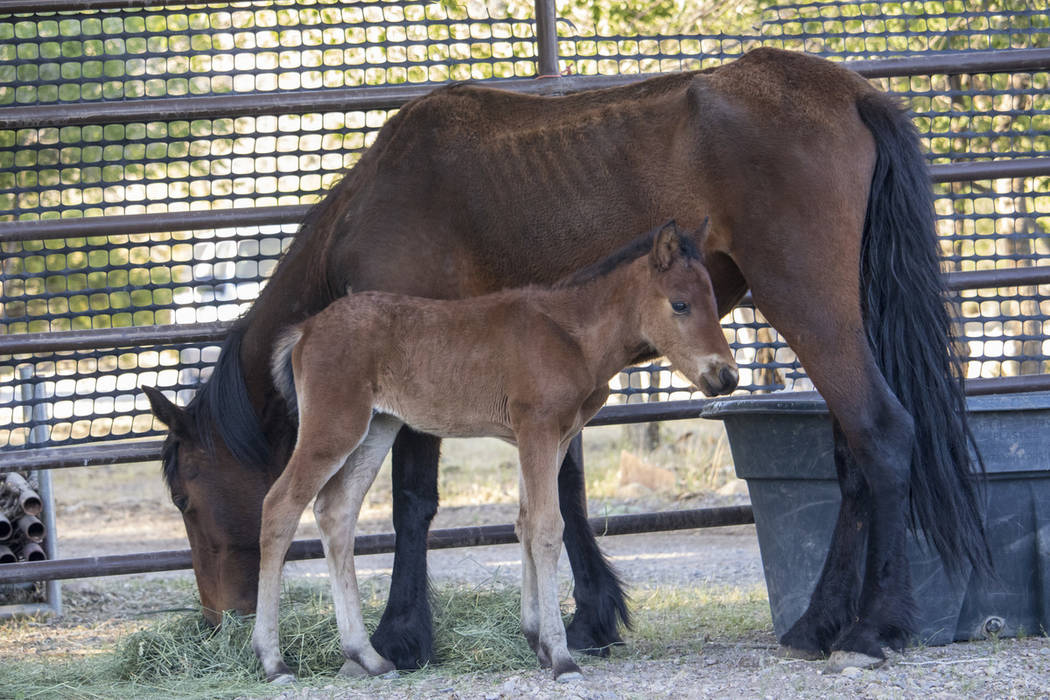 Wild horses feed at a temporary holding facility at Oliver Ranch in Red Rock Canyon Saturday after being rounded up near Cold Creek. (U.S. Forest Service) 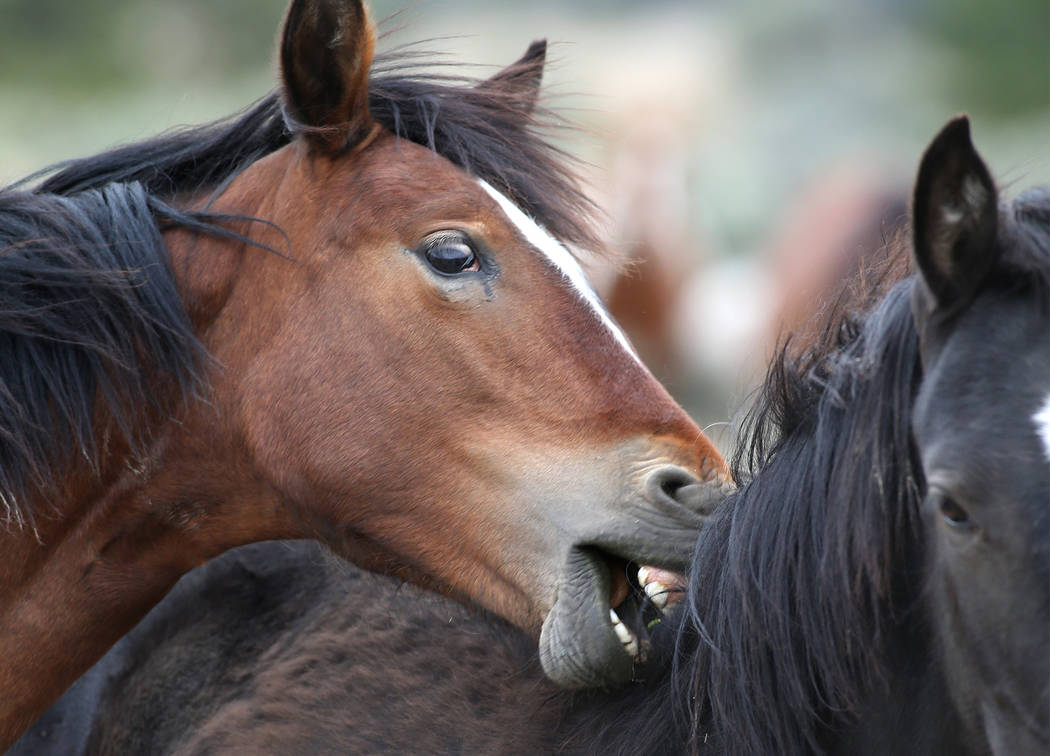 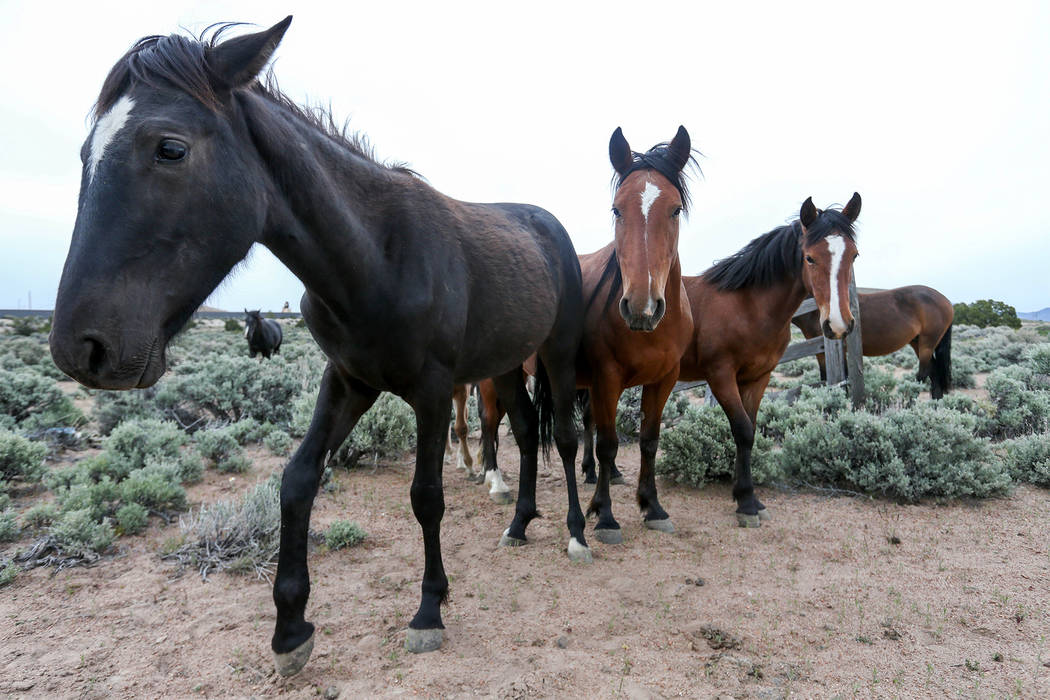 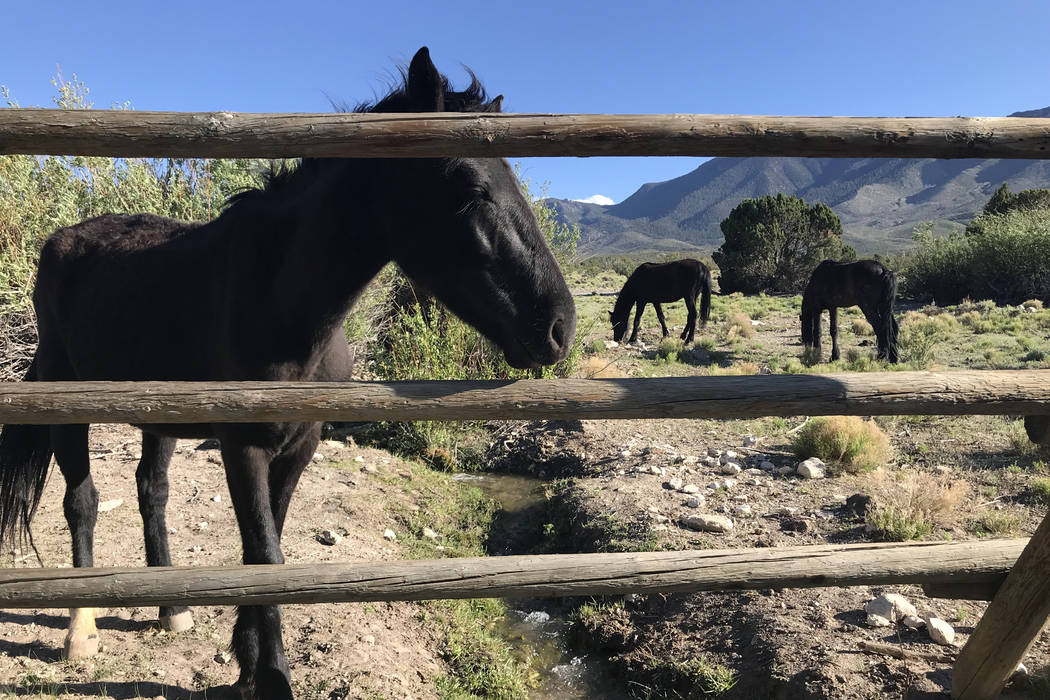 WASHINGTON — Wild horses and burros — iconic symbols of the American frontier — have become a priority for lawmakers and federal agencies grappling to balance the health of public land and herds of wild animals that populate Western states.

The federal government spends more than $81 million each year to manage an estimated 81,950 horses and burros under the watch of the Bureau of Land Management.

And more than 40,000 of the animals, or half of that wild herd, roam Nevada, where the government controls 85 percent of the landscapes of desert, sagebrush and pine forests.

But strategies to manage the wild herds and curb the growing population have created a fissure between lawmakers and the Trump administration.

Rep. Dina Titus, D-Nev., claims that under the Trump administration the BLM has “taken significant steps to remove protections for these animals.”

A longtime advocate of the herds, Titus said this year that the government is “shifting resources away from scientifically sound birth control programs and wasting limited resources on costly and dangerous roundups and holdings which only exacerbate population growth.”

But BLM managers say their intent is to help the wild horses and burros while protecting public land on which they reside and forage.

“We are trying to balance the health of the land and other resources,” said Debbie Collins, director of the BLM wild horse program in Norman, Oklahoma. “You have to keep the land healthy to keep the horses healthy.”

She said the roundups have become a necessary tool to help manage herds throughout the Western states.

Overpopulation is a major problem, not only for the land, but also for the well-being of the animals, Collins said.

She said the lack of water and forage, because of overgrazing, can become a deadly problem. She cited constant concern for the horses in the Red Rock Canyon area, just outside Las Vegas, as an example.

“One of our herds in that area — horses and burros — have really struggled to make it through the summer,” Collins said, noting a lack of food and water sources for a population that grows at a fast clip. “Either we leave them out there and they die, or we have an emergency roundup and bring them in.”

The 1971 Wild Free-Roaming Horses and Bureaus Act directed the BLM to manage overpopulation of herds on public lands and protect the animals.

An incentive program created by the BLM that went into effect in March provides increments of $500 to eligible people who adopt an animal. The money used to provide training and care for horses purchased for a minimum $25 adoption fee.

Brian Steed, the BLM’s deputy director of programs and policy, said the agency is encouraging wild horse adoptions and has provided homes for 245,000 animals since 1971.

But Titus and Rep. Raul Grijalva, D-Ariz., chairman of the House Natural Resources Committee, have expressed concern to the Interior Department about how money is being spent on programs and possible loopholes in current policies that would allow “kill-buyers” to purchase adoption animals.

Titus has cited an inspector general’s report that found one buyer purchased 1,794 horses from the BLM between 2008 and 2012 and sold them to slaughterhouses in Mexico, even though that is prohibited.

In that case, the BLM concluded it had no recourse against the buyer because of the contract language, according to the inspector general’s report.

To prevent a similar occurrence, the agency has put in place provisions that require prior approval if a buyer wants to adopt five or more horses or burros, or more than four animals in six months.

But the Trump administration, pressured by livestock organizations, has sought to relax prohibitions on horse slaughter in the past two budgets.

Those efforts have been turned back by a bipartisan group of lawmakers who have placed riders into spending bills to prohibit the relaxation of any current law on horse and burro slaughter and place strict limits on resale of animals to prevent commercial killing.

‘Trying to get them good homes’

Grijalva has requested language to expand horse and burro protections placed on the BLM to cover the U.S. Forest Service, which has captured wild horses in Northern California.

The Forest Service is working with the BLM to put those horses up for adoption.

Meanwhile, the BLM adoption program is working to thin the herds of animals on fragile public land and humanely place them with owners who will train and provide for them

“We are just trying to get them good homes,” Collins said.

But the federal government faces legal hurdles to use some birth control agents, and in most cases roundups are needed to administer the drugs.

Before leaving the Interior Department, then-Secretary Ryan Zinke told Congress he was an advocate of the roundups to reduce herd sizes, as well as neutering and spaying programs.

In his final months as secretary, Zinke failed to answer questions Titus and Grijalva posed about Trump administration policies on wild horse and burro management.

Now that Democrats have control of the House, and Grijalva has the Natural Resources Committee gavel, efforts are underway to provide new legislative protections for the wild horse and burro herds.

Suzanne Roy with the American Wild Horses Campaign praised Grijalva and Titus for taking steps to stop the federal government “from selling wild horses for slaughter over the objections of the overwhelming majority of Americans.”