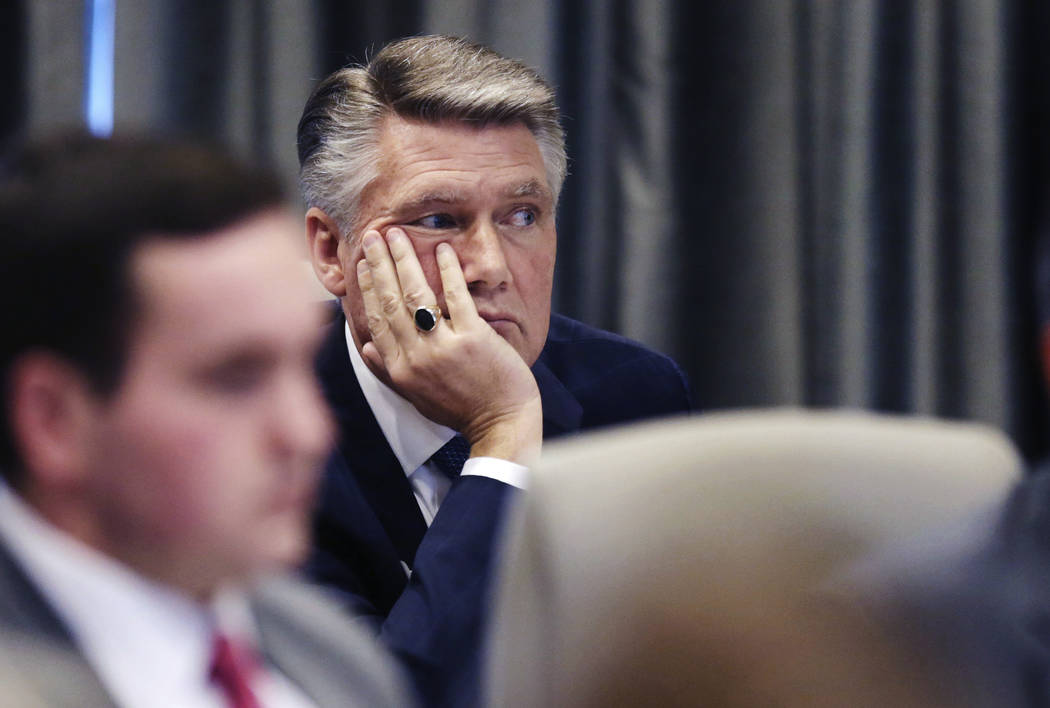 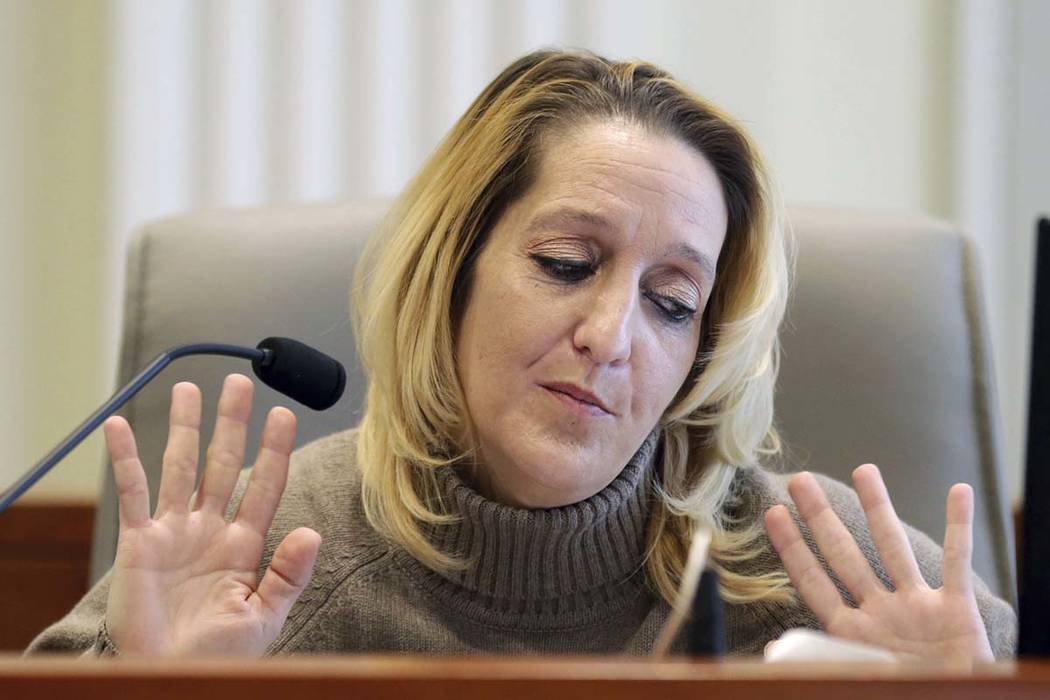 Lisa Britt throws up her hands as she answers a question by by attorney Marc Elias during the public evidentiary hearing on the 9th Congressional District investigation at the North Carolina State Bar Monday, Feb. 18, 2019, in Raleigh, N.C. (Juli Leonard/The News & Observer via AP, Pool) 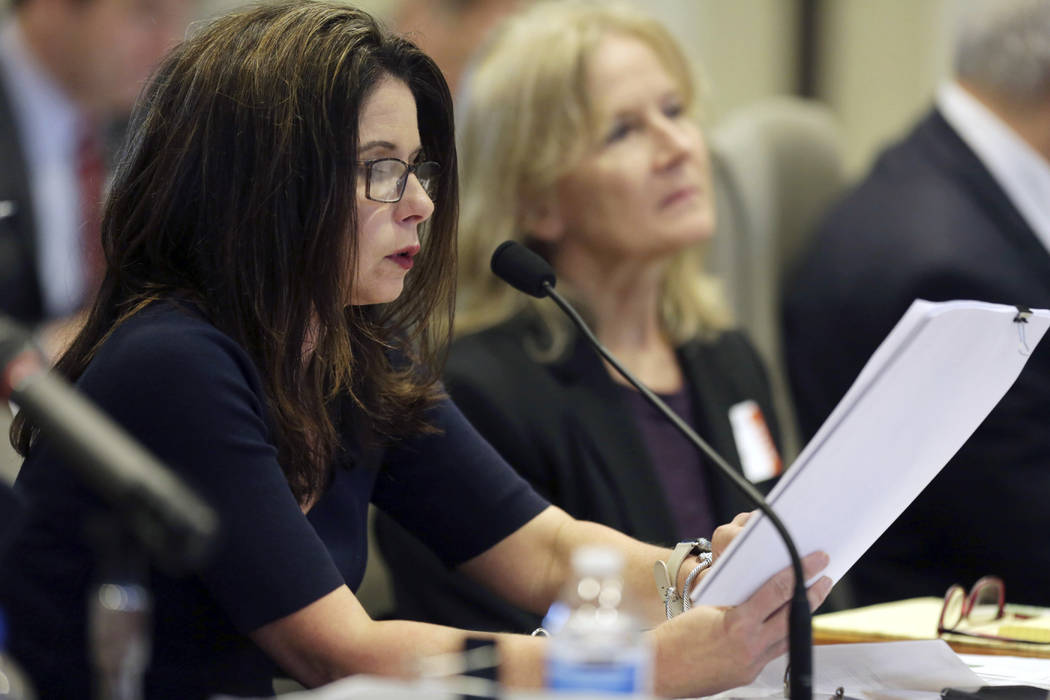 Executive director of the Board of Elections Kim Strach questions the first witness during the public evidentiary hearing on the 9th Congressional District investigation Monday, Feb. 18, 2019, at the North Carolina State Bar in Raleigh, N.C. (Juli Leonard/The News & Observer via AP, Pool) 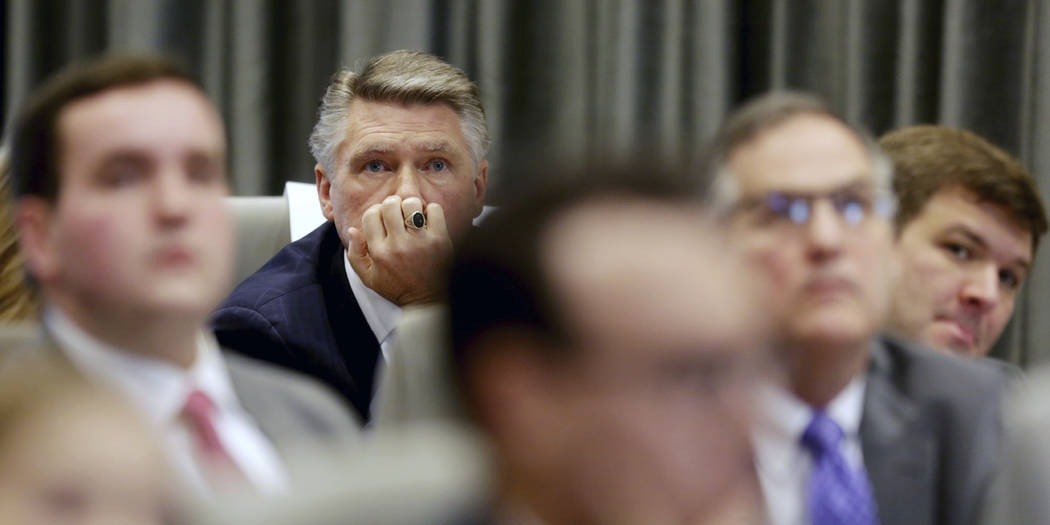 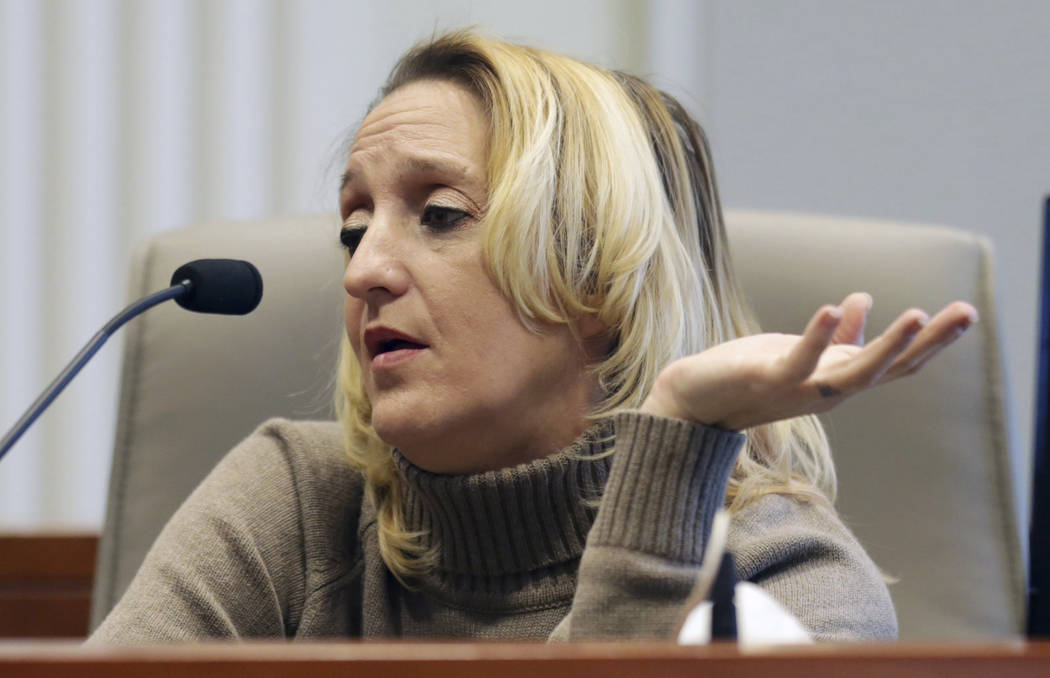 Lisa Britt answers a question by executive director of the Board of Elections Kim Strach during the public evidentiary hearing on the 9th Congressional District investigation Monday, Feb. 18, 2019, at the North Carolina State Bar in Raleigh, N.C. (Juli Leonard/The News & Observer via AP, Pool) 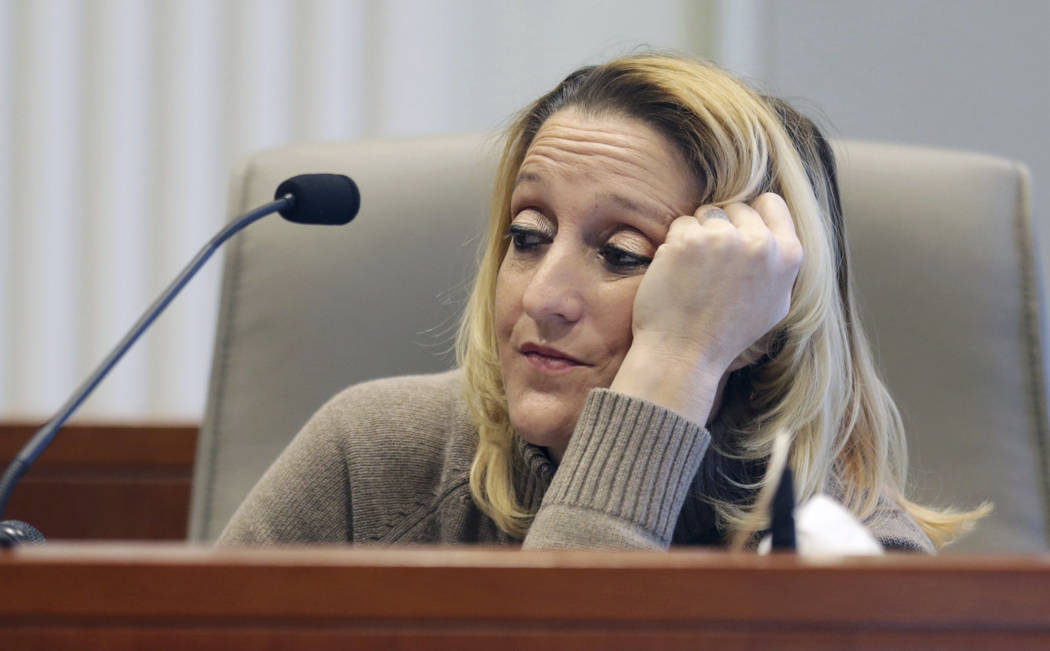 Lisa Britt pauses before answering a question by executive director of the Board of Elections Kim Strach during the public evidentiary hearing on the 9th Congressional District investigation Monday, Feb. 18, 2019, at the North Carolina State Bar in Raleigh, N.C. (Juli Leonard/The News & Observer via AP, Pool) 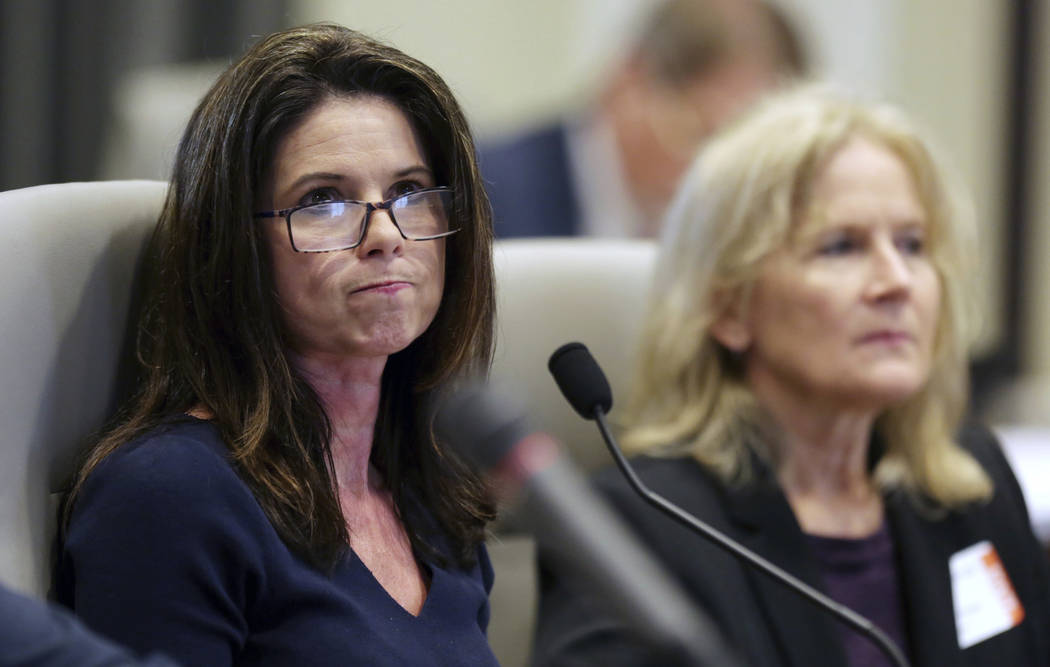 Executive director of the Board of Elections Kim Strach listens during the public evidentiary hearing on the 9th Congressional District investigation Monday, Feb. 18, 2019, at the North Carolina State Bar in Raleigh, N.C. (Juli Leonard/The News & Observer via AP, Pool) 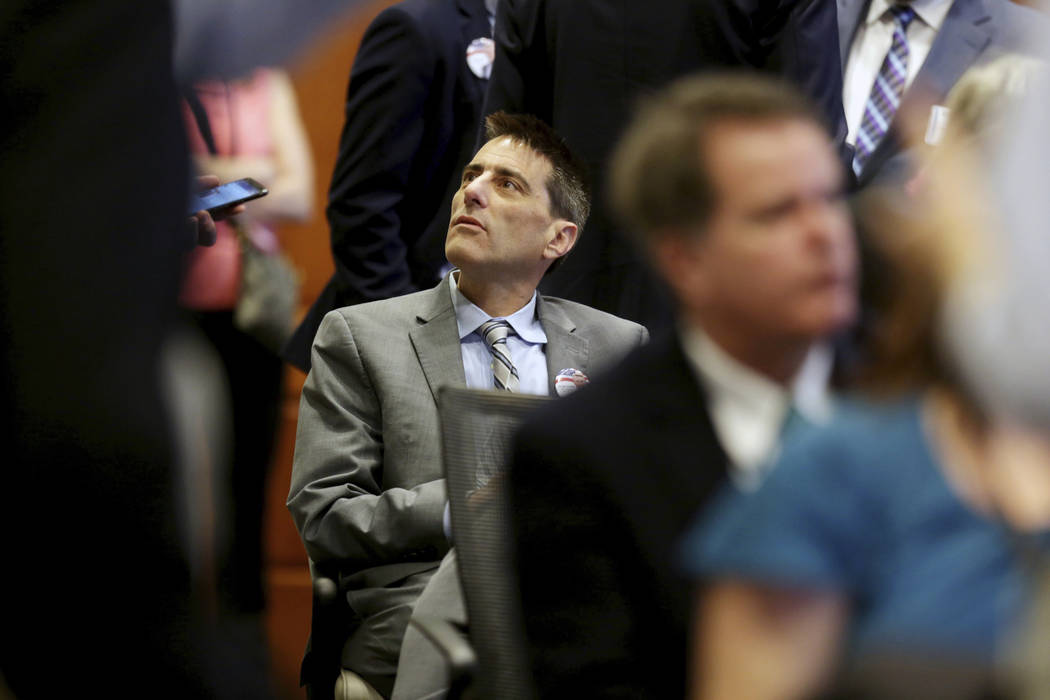 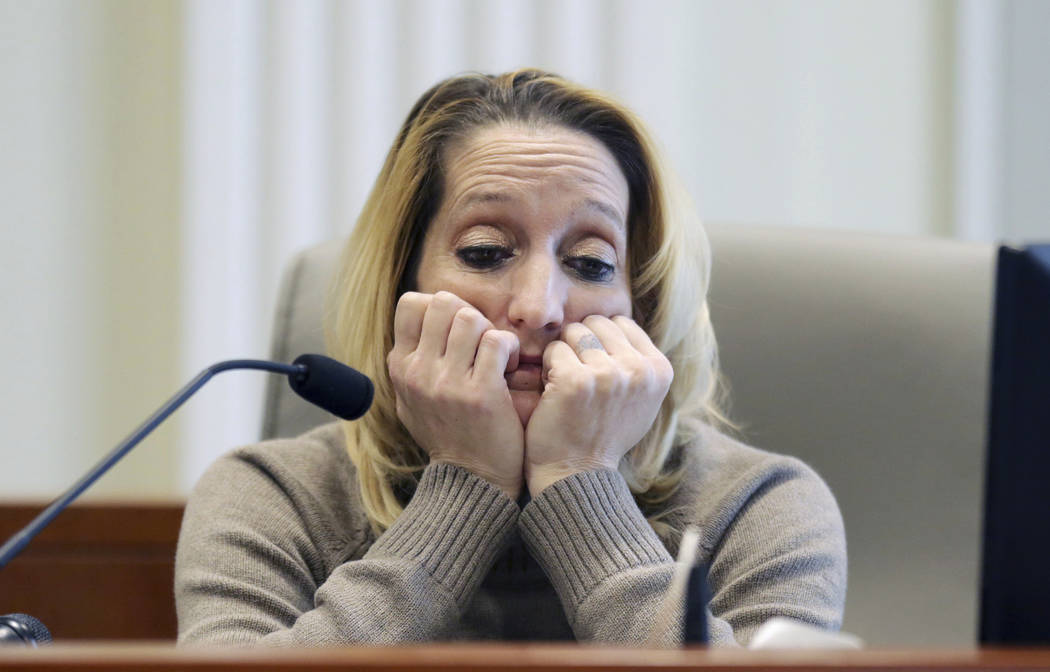 The state elections board could decide as early as Tuesday whether possibly criminal ballot fraud was unfortunate but tolerable, or whether to order a new election in the 9th congressional district.

The operative, Leslie McCrae Dowless Jr., was called to testify Monday, but his attorney refused to put him on the stand without legal protection against prosecution for events he described. The board refused.

The first of what could be a days-long hearing produced Dowless’ workers testifying that they sometimes filled in votes on unfinished, unsealed mail-in ballots. But there was scant evidence that Harris knew about it or even benefited.

Harris narrowly leads Democrat Dan McCready in unofficial results. But the race wasn’t certified in November after rumors of Dowless’ operation focusing on mail-in ballots. The elections board is expected to either declare a winner or order a new election after the hearing.

Dowless was hired to produce votes for Harris and Bladen County Sheriff Jim McVickers, but his methods last year included paying people to visit potential voters who had received absentee ballots and getting them to hand over those ballots, whether completed or not, Dowless worker Lisa Britt testified.

It’s illegal in North Carolina for anyone other than a guardian or close family member to handle a voter’s ballot because of the risk that it could be altered before being counted.

While Dowless and Harris’ main campaign consultant were in constant contact, she didn’t have any indication Harris knew about the operation, Britt said.

“I think Mr. Harris was completely clueless as to what was going on,” Britt said.

Britt testified she collected about three dozen sometimes unfinished ballots and handed them to Dowless, who kept them at his home and office for days or longer before they were turned in, said Britt, whose mother was formerly married to Dowless. While the congressional and sheriff’s races were almost always marked by voters who turned in unsealed ballots, Britt said she would fill in down-ballot local races — favoring Republicans — to prevent local elections board workers from suspecting Dowless’ activities.

In one case, Britt said she picked up the completed ballot of an elderly black woman. A week later, she was told to return the woman’s ballot after a local black empowerment group complained to Dowless that she was a voter they’d recruited. Britt said she could not explain why Dowless would still have the ballot in his possession rather than turning it in to the local elections board.

Dowless paid local people like Britt $125 for every 50 mail-in ballots they collected in Bladen and Robeson counties and turned in to him, Strach said.

Four of the five members on the elections board — composed of three Democrats and two Republicans — would need to agree a new election is necessary.

If that doesn’t happen, McCready’s lawyers said state officials should send their findings to the Democrat-dominated U.S. House and let it decide whether Harris should be seated — arguing that the U.S. Constitution gives the House authority over the elections and qualifications of its members.