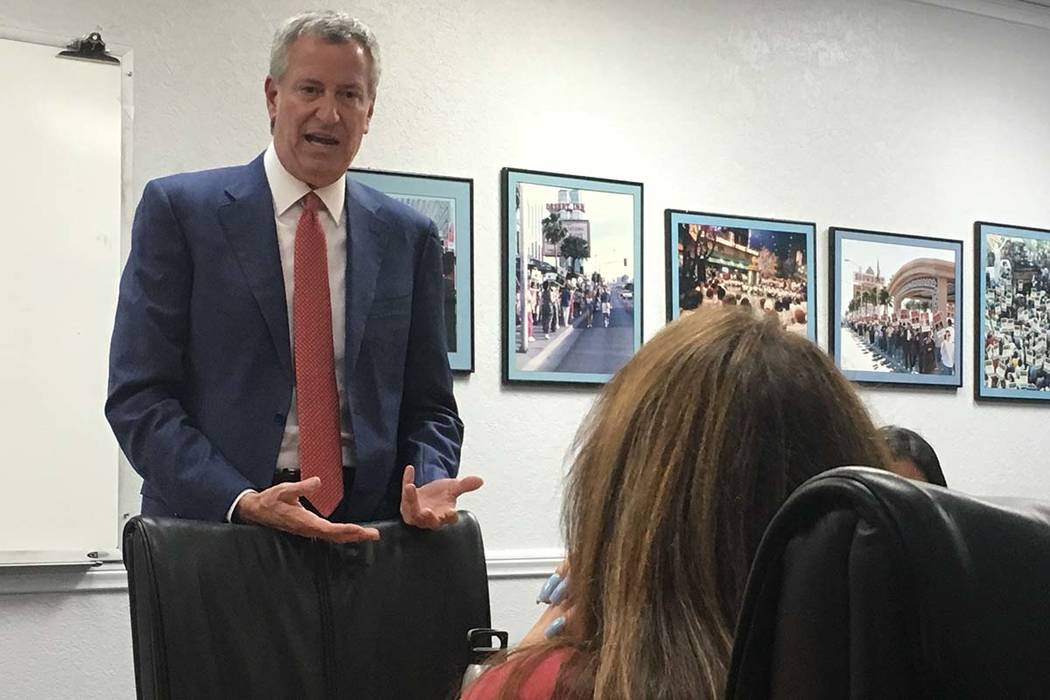 New York City Mayor Bill de Blasio said Friday he’s not decided whether to run for president, but he promised Las Vegas labor union members that he would join them on the picket line.

“We need to demand that elected officials are full partners in organizing,” de Blasio, 57, said during a meeting with Culinary Union members at their downtown Las Vegas headquarters.

It was the Democratic mayor’s latest stop in a series of trips to early presidential primary states, and he told Nevada’s most powerful union that he demanded his party be more progressive. When asked by a union member whether he would return to Las Vegas to help picket Station Casinos, de Blasio said he just needed to know the time and place.

Surrounded by 20 union members and staff seated around a long wooden table, de Blasio said in recent weeks he had spoken to people in New Hampshire, South Carolina and Iowa about social and economic issues most important to them. But after the meeting he said he still had not decided whether to enter the crowded Democratic primary race.

“My sense of mission right now is to talk about real change that is happening in New York and show people it can happen,” he said.

De Blasio touted his city’s programs for universal pre-kindergarten, guaranteed paid sick leave and providing health insurance to undocumented immigrants. He said the labor movement, in his city and in Las Vegas, was vital to fixing income inequality.

“There is plenty of money in this country. It’s just in the wrong hands,” he said. “It should be in the hands of working people who created all that wealth.”

Culinary members also shared their concerns with de Blasio. Most of those who spoke focused on health care.

One worker said her 35-year-old daughter paid $1,000 a month for insurance. Another lamented paying $600 for a single dose of emergency allergy medication. And another said insulin prices were so high that his brother “only takes what he needs to stay out of the hospital.”

De Blasio said universal health care must be a key issue for Democrats if they hope to get undecided voters to the polls in 2020. But he also said the party has a powerful ally in the Culinary.

“The change in the state of Nevada happened right here, right here,” he told union members. “You have rewritten the map of Nevada politically, and in so doing you are changing the United States of America.”