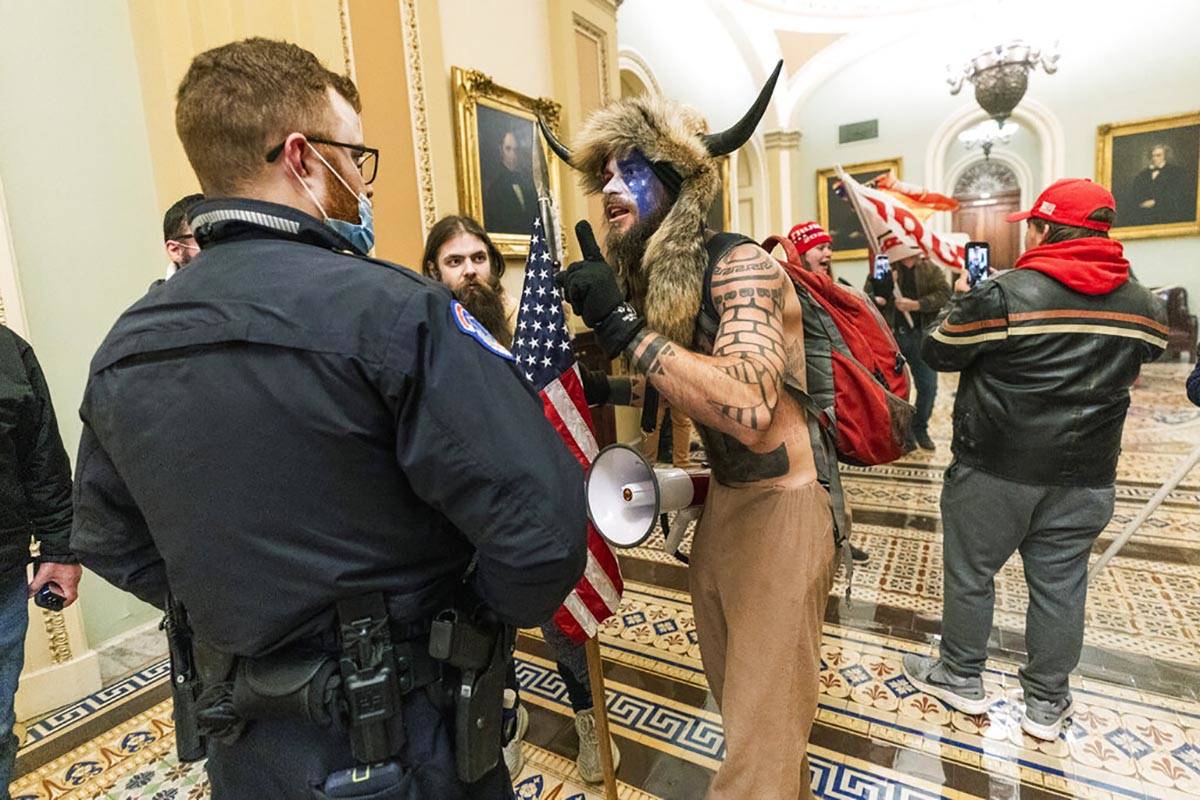 In a Jan. 6, 2021, file photo supporters of President Donald Trump are confronted by U.S. Capitol Police officers outside the Senate Chamber inside the Capitol in Washington. An Arizona man seen in photos and video of the mob wearing a fur hat with horns was also charged Saturday in Wednesday's chaos. Jacob Anthony Chansley, who also goes by the name Jake Angeli, was taken into custody Saturday, Jan. 9. (AP Photo/Manuel Balce Ceneta, File) 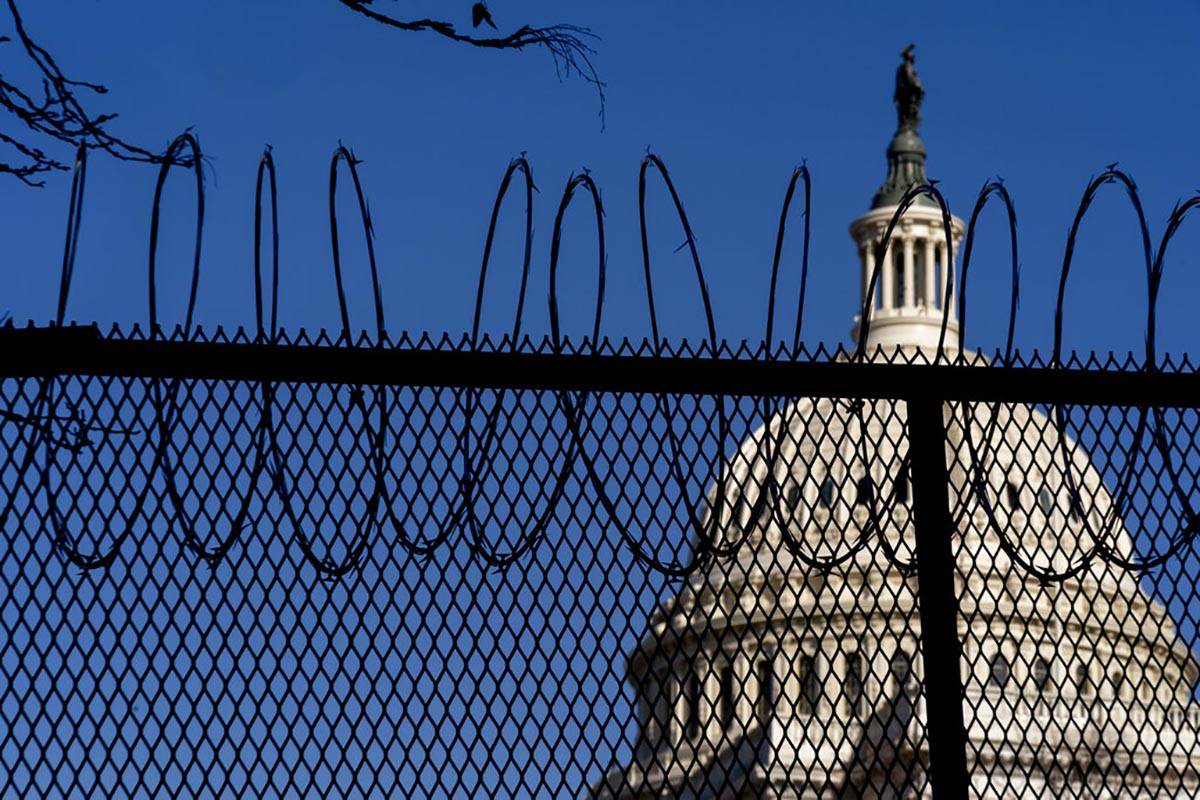 The Dome of the Capitol Building is visible through razor wire installed on top of fencing on Capitol Hill in Washington, Thursday, Jan. 14, 2021. (AP Photo/Andrew Harnik)

The revelation came in a motion prosecutors filed late Thursday in the case against Jacob Chansley, the Arizona man who took part in the insurrection while sporting face paint, no shirt and a furry hat with horns.

The details, tucked into the court papers, shed new light on the seriousness of the Capitol riot. They suggest that investigators believe there was a much more organized effort afoot, despite claims from rioters that it was a spontaneous outburst of anger over the election and President Donald Trump’s loss. Trump had been repeating baseless claims of election fraud for weeks.

Prosecutors say that after Chansley climbed up to the dais where Vice President Mike Pence had been presiding moments earlier, Chansley wrote a threatening note to Pence that said: “It’s only a matter of time, justice is coming.”

Pence and congressional leaders had been ushered out of the chamber by the Secret Service and U.S. Capitol Police before the rioters stormed into the room.

“Strong evidence, including Chansley’s own words and actions at the Capitol, supports that the intent of the Capitol rioters was to capture and assassinate elected officials in the United States Government,” prosecutors wrote in their memo urging the judge to keep Chansley behind bars.

The FBI has been investigating whether any of the rioters had plotted to kidnap members of Congress and hold them hostage, focusing particularly on the men seen carrying plastic zip-tie handcuffs and pepper spray.

Prosecutors raised a similar prospect on Friday in the case of a former Air Force officer who they alleged carried plastic zip-tie handcuffs because he intended “to take hostages.” But so far, the Justice Department has not publicly released any specific evidence on the plots or explained how the rioters planned to carry them out.

Chansley, who calls himself the “QAnon Shaman” and has long been a fixture at Trump rallies, surrendered to the FBI field office in Phoenix on Saturday.

News photos show him at the riot shirtless, with his face painted and wearing a fur hat with horns, carrying a U.S. flag attached to a wooden pole topped with a spear.

QAnon is an apocalyptic and convoluted conspiracy theory spread largely through the internet and promoted by some right-wing extremists.

Chansley told investigators he came to the Capitol “at the request of the president that all ‘patriots’ come to D.C. on January 6, 2021.” An indictment unsealed Tuesday in Washington charges him with civil disorder, obstruction of an official proceeding, disorderly conduct in a restricted building, and demonstrating in a Capitol building.

More than 80 people are facing charges stemming from the violence, including more than 40 people in federal court. Dozens more were arrested for violating a curfew that night. The federal charges brought so far are primarily for crimes such as illegal entry, but prosecutors have said they are weighing more serious charges against at least some of the rioters. Some were highly-trained ex-military and police.

Michael Sherwin, acting U.S. attorney for the District of Columbia, said this week that he has organized a group of national security and public corruption prosecutors whose sole focus is to bring sedition charges for the “most heinous acts that occurred in the Capitol.”

During a hearing in Texas on Thursday, a prosecutor urged a judge to keep Col. Larry Rendall Brock Jr. locked up, saying the man meant to “take hostages.” Brock was arrested Sunday in Texas after being photographed on the Senate floor during the deadly riot wearing a helmet and heavy vest and carrying plastic zip-tie handcuffs.

Brock’s attorney, Brook Antonio II, noted that he has only been charged with misdemeanors. Antonio said there was no direct evidence of Brock breaking doors or windows to get into the Capitol, or doing anything violent once he was inside.

An Associated Press review of public records, social media posts and videos shows at least 21 current or former members of the U.S. military or law enforcement have been identified as being at or near the Capitol riot, with more than a dozen others under investigation but not yet named. In many cases, those who stormed the Capitol appeared to employ tactics, body armor and technology such as two-way radio headsets that were similar to those of the very police they were confronting.

Experts in homegrown extremism have warned for years about efforts by far-right militants and white-supremacist groups to radicalize and recruit people with military and law enforcement training, and they say the Jan. 6 insurrection that left five people dead saw some of their worst fears realized.

“ISIS and al-Qaida would drool over having someone with the training and experience of a U.S. military officer,” said Michael German, a former FBI agent and fellow with the Brennan Center for Justice at New York University. “These people have training and capabilities that far exceed what any foreign terrorist group can do. Foreign terrorist groups don’t have any members who have badges.”

A Civil War-era sedition law being dusted off for potential use in the mob attack on the U.S. Capitol was last successfully deployed a quarter-century ago in the prosecution of Islamic militants who plotted to bomb New York City landmarks.

An Egyptian cleric, Sheikh Omar Abdel-Rahman, and nine followers were convicted in 1995 of seditious conspiracy and other charges in a plot to blow up the United Nations, the FBI’s building, and two tunnels and a bridge linking New York and New Jersey.

Applications of the law making it a crime to conspire to overthrow or forcefully destroy the government of the United States have been scant. But its use is being considered against the mob that killed a police officer and rampaged through the U.S. Capitol last week.

Michael Sherwin, acting U.S. attorney for D.C., has said “all options are on the table,” including sedition charges, against the Capitol invaders.

“Certainly if you have an organized armed assault on the Capitol, or any government installation, it’s absolutely a charge that can be brought,” said Andrew McCarthy, a former federal prosecutor who secured convictions at Abdel-Rahman’s 1995 trial.

The challenge, he said, is whether prosecutors can prove people conspired to use force.

“In our case, conspiracy was a layup because of the nature of the terrorist cell we were targeting. In this case, can they show conspiratorial activity or was it one of these things that spontaneously combusted, which makes conspiracy harder to prove?” McCarthy said.

Karen Greenberg, director of the Center on National Security at the Fordham University School of Law, said sedition charges in an attack against the center of U.S. government are even more appropriate than in the New York bombing plot.

“Of course we should use it here. That’s what this is, seditious conspiracy,” she said.