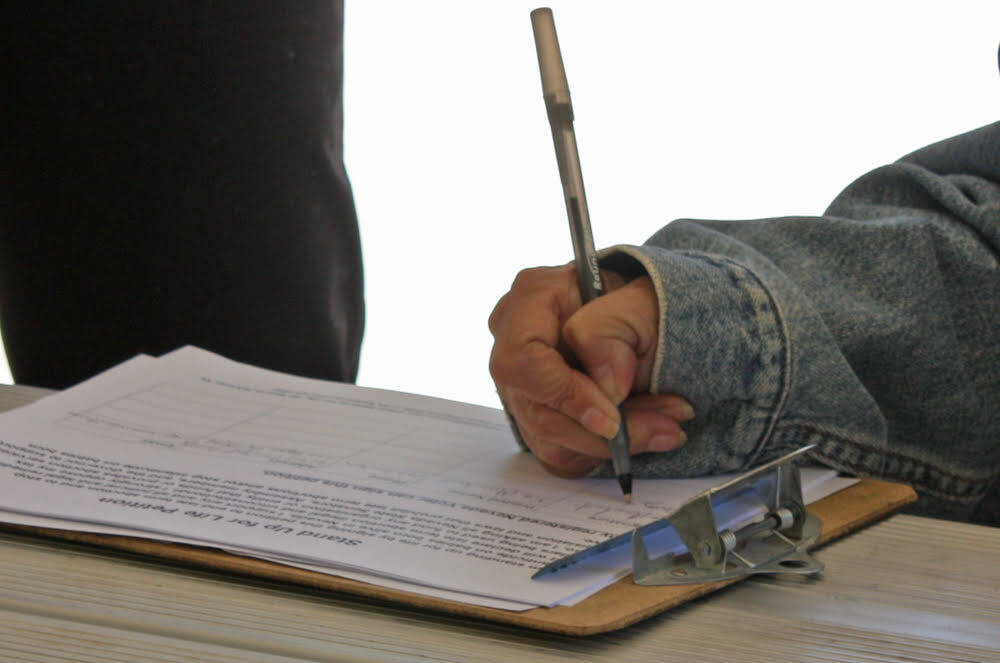 Robin Hebrock/Pahrump Valley Times A rally attendee is pictured signing her name to the petition to protest "late-term" abortions.

A Nevada PAC launched an effort last month to build support for an initiative that would require doctors to notify parents when a minor plans to have an abortion.

If Protect Our Girls, a PAC supported by Nevada Right to Life, receives the roughly 140,000 signatures it needs, the Legislature will have to consider amending state law to require parental notification of abortion for minors. If lawmakers reject the measure, the language will go directly to voters in 2024.

“We don’t let 10-year-olds or 17-year-olds go out and buy a car or buy a house, but we let them consent to a surgery that they often don’t understand, don’t know what the physical and psychological … consequences could be,” said Melissa Clement, chair of the PAC pursuing the measure and executive director of Nevada Right to Life.

The initiative petition, filed last week, is nearly identical to an initiative from 2020. Clement said that effort failed because the signature drive coincided with the shutdown of the state in response to the COVID-19 pandemic.

The initiative would not affect the state’s law that legalizes abortion in general. That statute was subject to a referendum in 1990 and was upheld by the people, which means it cannot be changed without a subsequent vote. But other abortion-related laws can be passed by the Legislature or by initiative.

On the books but not enforced

Nevada got a parental notification law on the books in the 1980s, but it was challenged by Planned Parenthood and struck down by a federal court, Clement said. That ruling was not challenged by the state, she said.

According to the initiative petition, the court found the judicial bypass portion of the law was not written appropriately. The initiative seeks to rewrite that portion. Proposed language would allow girls to ask a court to allow an abortion without parental notification.

More than 30 states have enacted and enforce laws regarding parental involvement in abortions, Clement said.

“But not Nevada,” Clement said. “Nevada is a capital of child sex-trafficking, and we allow this loophole that only benefits abusers, pimps, sex traffickers, and we continue to do it. We just allow it to happen.”

Clement said her organization and parents across the state have asked lawmakers to change the law on numerous occasions without success.

“Because here’s what happens: When you’re a teenager and you find out your parents are going to find out what you’re doing, you modify your behavior, and you get your parents involved earlier,” she said.

If adopted, doctors who knowingly violate the law would be guilty of a misdemeanor.

Clement said she doesn’t know if that initiative would affect abortion, and that it is up for a court to decide. In her view, however, abortion is a medical procedure.

She said she often hears from parents who are unable to access their children’s records without written consent from the child.

Pro-choice groups have voiced opposition to the PAC’s efforts.

“Let’s be clear, parental notification requirements routinely do more harm than good,” Planned Parenthood Votes Nevada Executive Director Lindsey Harmon said in a statement. “So much so that in 2015, professional medical associations testified in opposition to a bill that, much like the ballot initiative filed last week, sought to delay access to critical, time-sensitive abortion care and increased risk of abuse or coercion rather than achieving its stated purpose of fostering family communication.”

Harmon said abortion opponents are trying to take advantage of national challenges to abortion access, but do not have public support on their side.

“All people who can give birth must have access to the full spectrum of reproductive health care and education, and that includes abortion care, without barriers,” she said. “Measures like these are not protective. They are transparent attempts to curtail Nevadans’ fundamental right to reproductive freedom.”

Caroline Mello Roberson, NARAL Pro-Choice America southwest regional director, also released a statement, arguing that mandatory notification and consent laws “can send young people on a shaming and traumatizing detour through the court that puts their health and well-being at risk.”

“Young people must have the freedom to access the abortion care they need without delay and in consultation with someone they trust—not to be used as pawns for political gain,” she said.