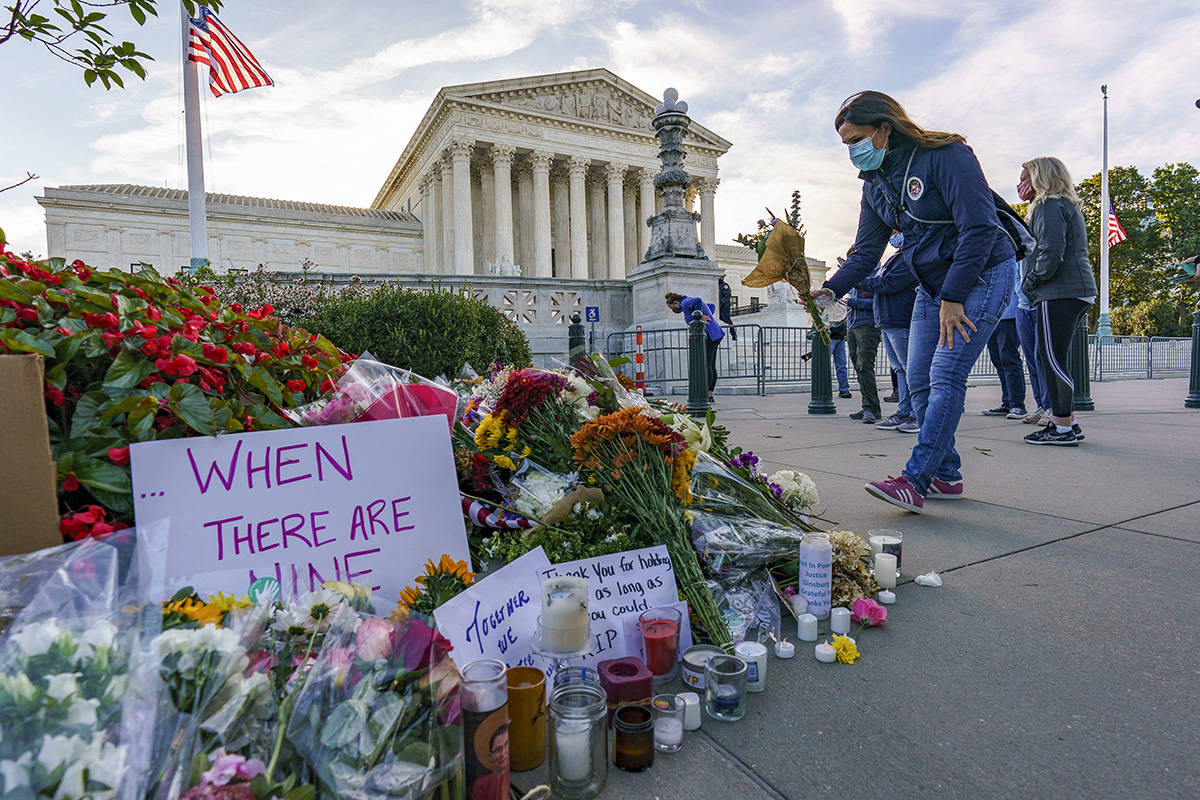 People gather at the Supreme Court on the morning after the death of Justice Ruth Bader Ginsburg, 87, Saturday, Sept. 19, 2020 in Washington. (AP Photo/J. Scott Applewhite)

Supreme Court Justice Ruth Bader Ginsburg died at the age of 87 on Friday.

Upon learning of Ginsburg’s death, President Donald Trump said she led an amazing life. Later he took to Twitter and released a statement calling the justice a “fighter to the end.”

"She led an amazing life," President Trump said as he learned that Justice Ruth Bader Ginsburg had died on Friday. "What else can you say? She was an amazing woman." https://t.co/XVNIqgnDRe pic.twitter.com/oLw304yrQ7

Statement from the President on the Passing of Supreme Court Associate Justice Ruth Bader Ginsburg pic.twitter.com/N2YkGVWLoF

“Ginsburg demonstrated that one can disagree without being disagreeable toward one’s colleagues or different points of views.”

Ruth Bader Ginsburg stood for all of us. She was an American hero, a giant of legal doctrine, and a relentless voice in the pursuit of that highest American ideal: Equal Justice Under Law. May her memory be a blessing to all people who cherish our Constitution and its promise.

Biden’s running mate, Sen. Kamala Harris said “tonight we mourn, we honor, and we pray for Justice Ruth Bader Ginsburg and her family. But we also recommit to fight for her legacy.”

Tonight we mourn, we honor, and we pray for Justice Ruth Bader Ginsburg and her family. But we also recommit to fight for her legacy.

Doug and I send our heartfelt prayers to Jane and James, and the entire Ginsburg family, particularly on this holy day of Rosh Hashanah. pic.twitter.com/SNyqZCznfv

Vice President Mike Pence said Ginsburg will be remembered “as a jurist who respected and commanded the respect of all her colleagues.”

Statement from the Vice President on the Passing of Justice Ruth Bader Ginsburg pic.twitter.com/5wsq5apOOZ

A large crowd descended outside the Supreme Court on Friday night to pay tribute to Ginsburg.

Aug. 10 marked her 27th anniversary since being appointed to the high court by President Bill Clinton. On Friday, Clinton said “Ruth Bader Ginsburg’s life and landmark opinions moved us closer to a more perfect union.”

We have lost one of the most extraordinary Justices ever to serve on the Supreme Court. Ruth Bader Ginsburg’s life and landmark opinions moved us closer to a more perfect union. And her powerful dissents reminded us that we walk away from our Constitution’s promise at our peril. pic.twitter.com/dDECiBxae6

Also weighing in was former President Barack Obama, who praised the diminutive high court justice for her “unwavering faith in our democracy and its ideals.”

George W. Bush statement: "Laura and I join our fellow Americans in mourning the loss of Ruth Bader Ginsburg. She dedicated many of her 87 remarkable years to the pursuit of justice and equality, and she inspired more than one generation of women and girls."

She earned praise, even from her most fervent opposition, case in point, former New York City Mayor Rudy Giuliani.

Justice Ruth Bader Ginsburg was a credit to the Court.

I disagreed with many of her decisions but they were all well reasoned and well argued.

She was a close friend of her ideological opposite, Justice Scalia.

They both loved opera, law and the U.S.A.

May She Rest In Peace

Perhaps sensing the end was near, Ginsburg just days before dying told her granddaughter her dying wish was that she would not be replaced until a new president was elected.

Just days before her death, Ginsburg dictated this statement to her granddaughter: "My most fervent wish is that I will not be replaced until a new president is installed," according to NPR.https://t.co/91Nw4ZVJsP

Chief Justice John Roberts mourned Ruth Bader Ginsburg's passing: "Today we mourn, but with confidence that future generations will remember Ruth Bader Ginsburg as we knew her — a tireless and resolute champion of justice." https://t.co/WHwjL4Oor2 pic.twitter.com/ITKUiW67h4

Ginsburg’s death on the eve of Rosh Hashana, the Jewish New Year, had significant meaning for many.

According to Jewish tradition, a person who dies on Rosh Hashanah, which began tonight, is a tzaddik, a person of great righteousness. Baruch Dayan HaEmet.

Her death also reverberated in the sports world.

A trailblazer and icon, Ruth Bader Ginsburg dedicated herself to movements effecting change from the ground up.

“Real change, enduring change, happens one step at a time.”

Voting is a step.

Rest knowing we will not rest ❤️ pic.twitter.com/tP5LjgAmV8

“So that’s the dissenter’s hope: that they are writing not for today but for tomorrow.”

To pay tribute, those who believe in equality & freedom must fight for the ideals she championed.

This is devastating, an incalculable loss. We owe so much to RBG. Rest in Power Ruth Bader Ginsburg. #RIPRBG

Senate Majority Leader Mitch McConnell said Ginsburg said “her intelligence and determination earned her respect and admiration throughout the legal world” and then promised that the Senate will vote on whomever Trump nominates to fill the position.

The Senate and the nation mourn the passing of Justice Ruth Bader Ginsburg and the conclusion of her extraordinary American life.

Senate Minority Leader Chuck Schumer responded by saying the American people should have a voice in who selects Ginsburg’s replacement.

The American people should have a voice in the selection of their next Supreme Court Justice. Therefore, this vacancy should not be filled until we have a new president.

The entertainment world also felt the sting of Ginsburg’s death.

Tonight, we weep.
Tomorrow, we carry on the fight in her stead.#RIPRBG pic.twitter.com/lX2GxynDa9

Okay, today we mourn a Lioness Of Light and Righteousness, tomorrow we fight like RBG did for us every single day. She would have it no other way. Rest In Power Justice RGB! We will prevail on your behalf.

The person who told me Ruth Bader Ginsburg had passed away was my daughter, Neve. I was terribly sad, but also filled with gratitude that my daughter could see first hand how much intelligent, brave women can change the world.

"Fight for the things you care about, but do it in a way that will lead others to join you." RIP, RBG pic.twitter.com/HLtKG7qdnp

Ruth Bader Ginsburg was the kind of scholar and patriot you get excited about explaining to your kids. The kind of person who you say “who knows, one day you could be HER”. I hope you rest well, RBG, you must have been tired from changing the world.