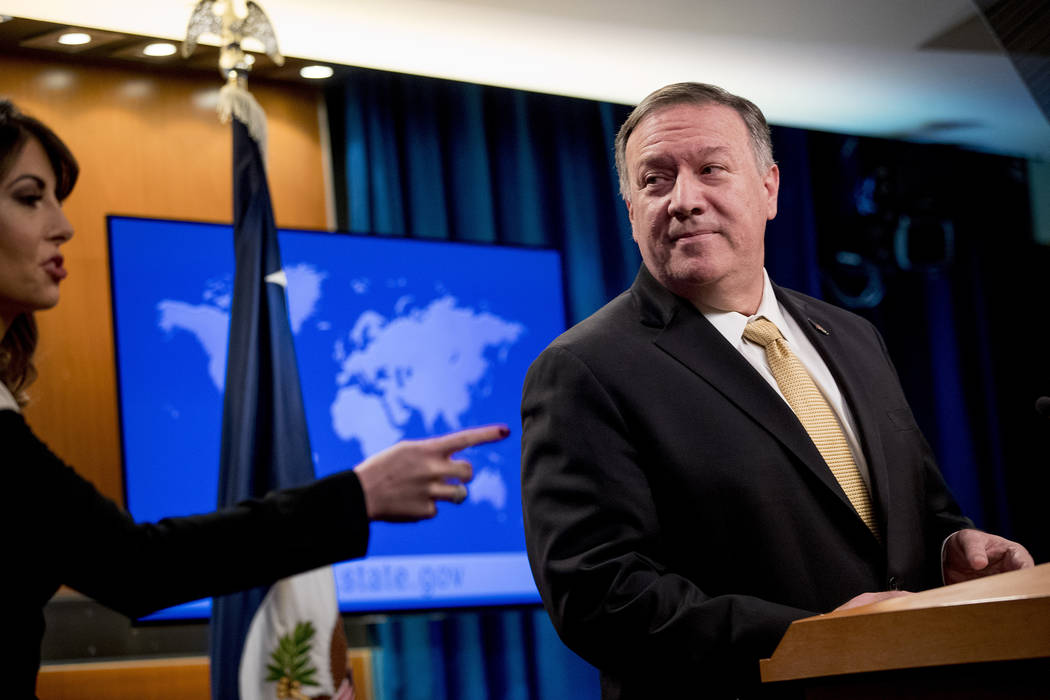 Secretary of State Mike Pompeo, right, pauses as State Department spokeswoman Morgan Ortagus, left, calls on a reporter during a news conference at the State Department in Washington, Monday, Nov. 18, 2019. Pompeo spoke about Iran, Iraq, Israeli settlements in the West Bank, protests in Hong Kong, and Bolivia, among other topics. (AP Photo/Andrew Harnik) 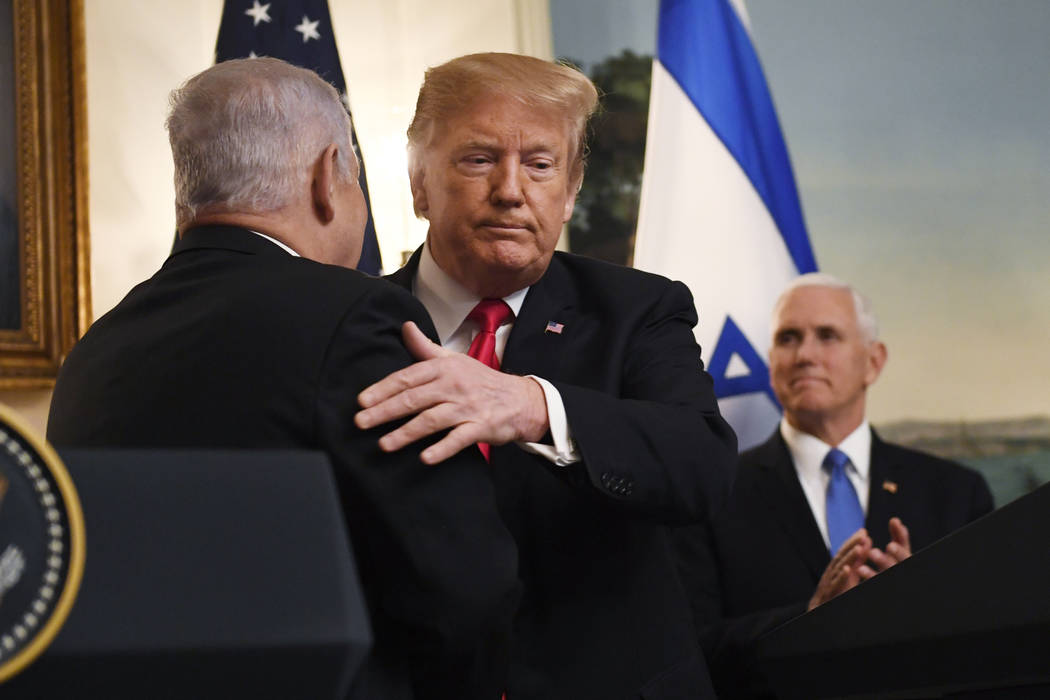 FILE - In this March 25, 2019, file photo, President Donald Trump embraces Israeli Prime Minister Benjamin Netanyahu, as Vice President Mike Pence looks on, in the Diplomatic Reception Room of the White House in Washington. Netanyahu routinely boasts that Trump is the best friend that Israel has ever had in the White House. But things have begun to change since he failed to win reelection in April and was forced to hold a second, inconclusive vote last month. (AP Photo/Susan Walsh, File)

WASHINGTON — Secretary of State Mike Pompeo announced Monday that the Trump administration does not consider Israeli civilian settlements in the West Bank “inconsistent with international law.”

The announcement linked President Donald Trump with his Israeli political doppelganger, Prime Minister Benjamin Netanyahu, and marked the end of a 41-year-old legal review of Israeli settlements. Pompeo framed it as the result of robust legal review and a reversal of President Barack Obama’s Israel policy.

It was a decision that chafed the political left.

Halie Soifer, executive director of the Jewish Democratic Council of America, responded that Pompeo’s “reversal of decades of U.S. policy is a green light for Israeli annexation of the West Bank, which will permanently impede prospects for a two-state solution.”

During a press briefing in Foggy Bottom, Pompeo said the announcement upended a legal interpretation set in 1978 when then-President Jimmy Carter’s State Department found that Israel’s civilian settlements in the West Bank were inconsistent with international law.

Carter’s successor, Ronald Reagan, did not see all settlements as illegal, but he did refer to them as an “obstacle to peace.” Reagan advocated a freeze in Jewish settlements as a sweetener for Arab-Israeli peace talks, as did Presidents George H.W. Bush, Bill Clinton, George W. Bush and Obama.

In his final full month in office, Obama refused to veto a United Nations Security Council resolution that declared Israeli settlements illegal — a move that made already chilly U.S.-Israeli relations in the Obama years even frostier.

For his part, candidate Donald Trump had promised to end “the days of treating Israel like a second-class citizen.”

With his political future murky, Netanyahu has made plain his desire to annex parts of the West Bank if he somehow retains power.

In April, Trump helped Netanyahu’s aspirations when he recognized the Golan Heights as Israeli territory.

Like other successful presidential hopefuls before him, Trump stumped on a plank to locate the U.S. embassy in Jerusalem. Unlike those predecessors, however, Trump actually moved U.S. diplomatic headquarters from Tel Aviv to the Holy City in 2018 and recognized Jerusalem as the capital of Israel.

It was a sign that Trump would actually deliver on the usual campaign promises. The Trump team in essence has been saying, “We’re throwing out the old playbook,” said Matt Brooks of the Republican Jewish Coalition. And they’re not going to “participate in this kabuki dance,” he said.

Naysayers predicted the Middle East would blow up if the United States put its embassy in Jerusalem, Brooks added, but it didn’t happen.

“We believe that what we’ve done today is, we’ve recognized the reality on the ground,” he said.

Pompeo also maintained that the announcement, like Washington’s recognition of Jerusalem as Israel’s capital, left the drawing of lines to future peace negotiators. In that same spirit, Pompeo argued, Israeli courts, not international tribunals or figures, should decide which settlements are legal.

When he first assumed office, Trump was critical of settlements. He told Israel Hayom that settlements “don’t help the process” and said that he does not believe “going forward with these settlements is a good thing for peace.” (Israel Hayom, like the Las Vegas Review-Journal, is owned by the family of Sheldon Adelson.)

At a joint press conference, Trump even told Netanyahu, “I’d like to see you hold back on settlements for a little bit.”

But as 2020 beckons, Trump sees an opportunity to woo Jewish voters who are default Democratic voters.

According to exit polls, Trump garnered 24 percent of the Jewish vote in 2016. It is not clear that Trump can boost that number. This summer the Morning Consult/Politico poll registered 72 percent disapproval of Trump among Jewish voters.