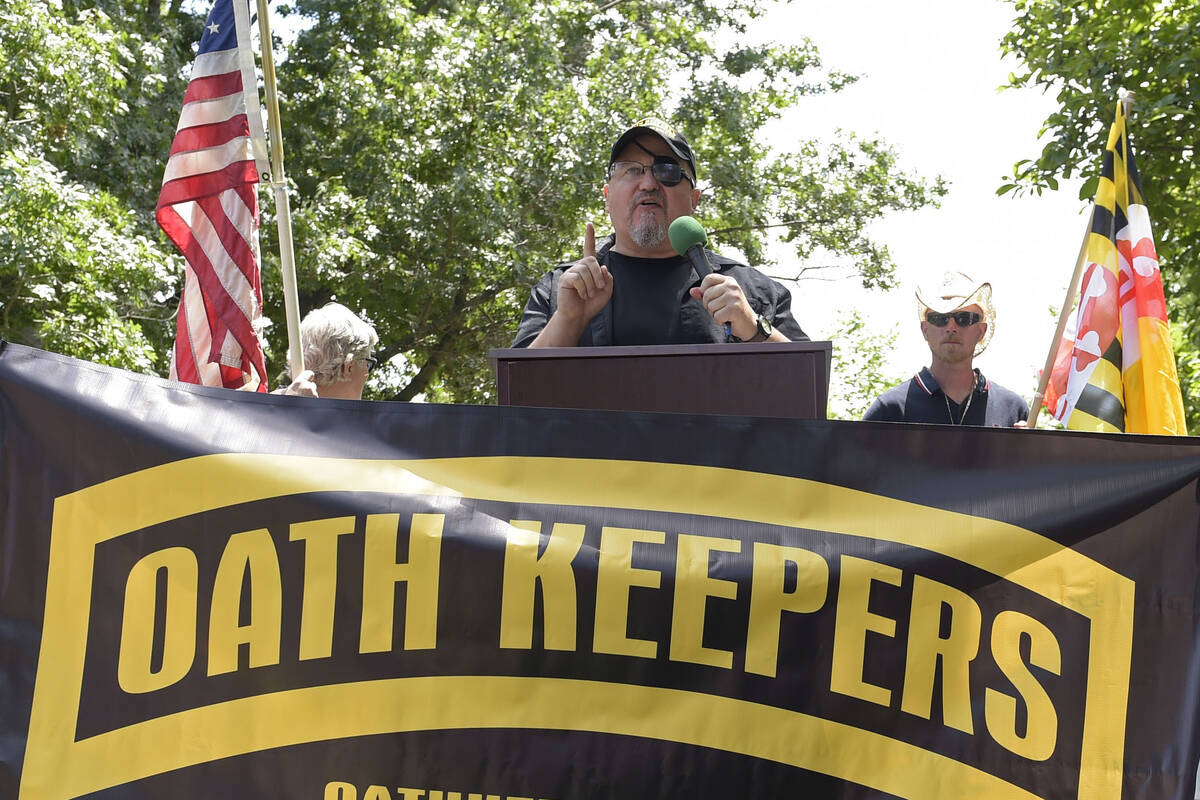 FILE - Stewart Rhodes, founder of the Oath Keepers, center, speaks during a rally outside the White House in Washington, June 25, 2017. Hundreds of pages of court documents in the case against Rhodes and four co-defendants, whose trial opens with jury selection Tuesday, Sept. 27, 2022, in Washington's federal court, paint a picture of a group so determined to overturn Biden's election that some members were prepared to lose their lives to do so. (AP Photo/Susan Walsh, File) 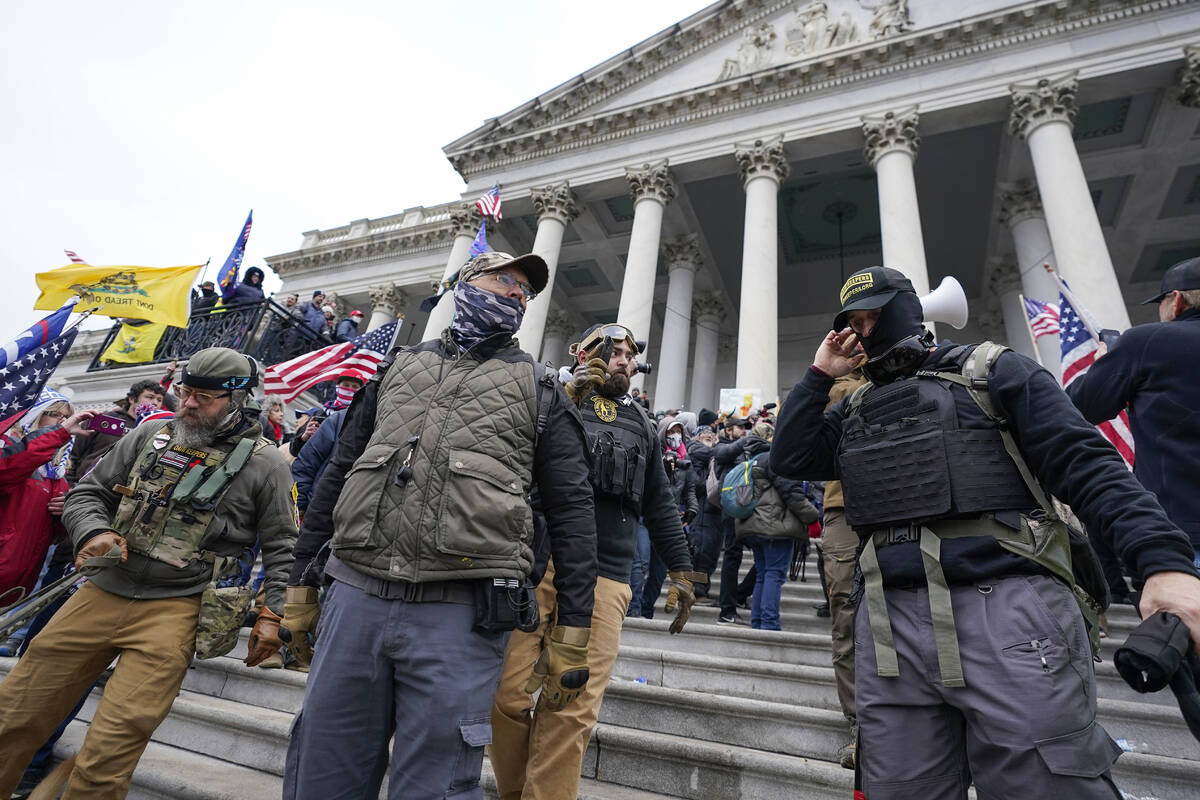 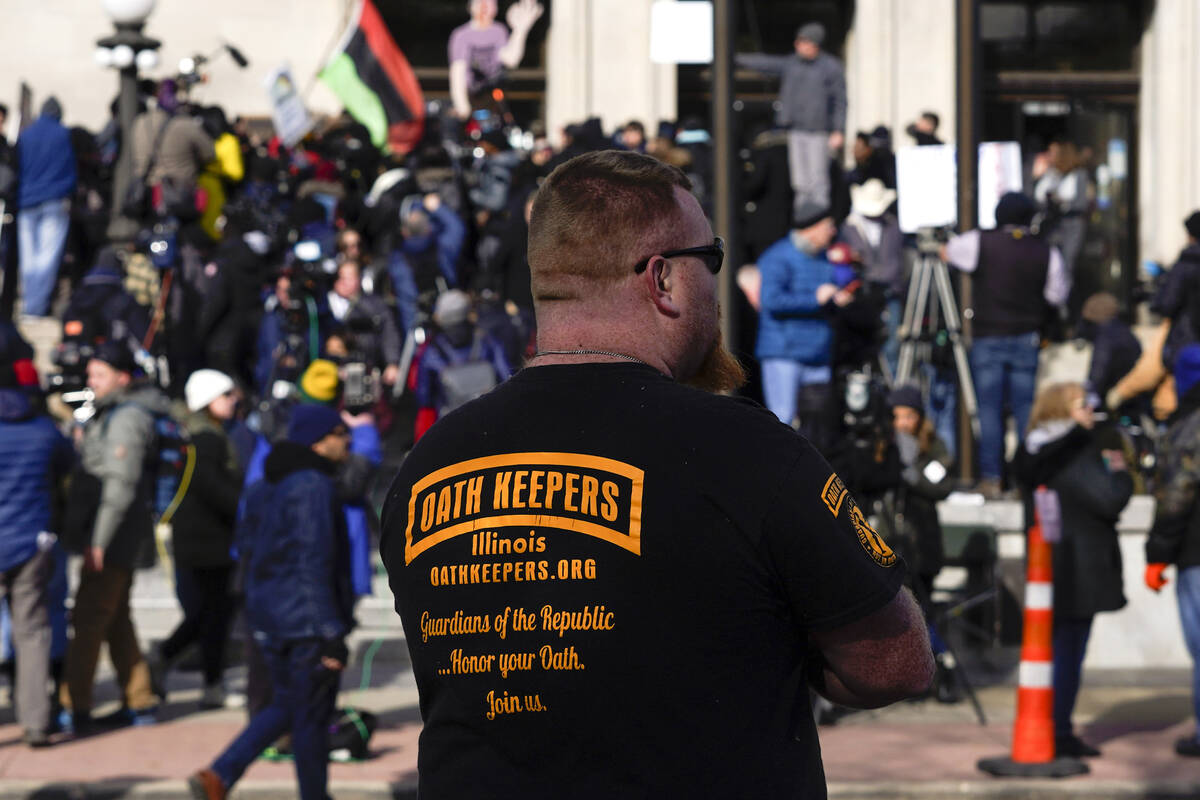 FILE - A man wearing an Oath Keepers shirt stands outside the Kenosha County Courthouse, Nov. 19, 2021 in Kenosha, Wis. The trial of the founder of the Oath Keepers, Stewart Rhodes, and four associates charged with seditious conspiracy in the attack on the U.S. Capitol is set to begin next week. (AP Photo/Paul Sancya, File) 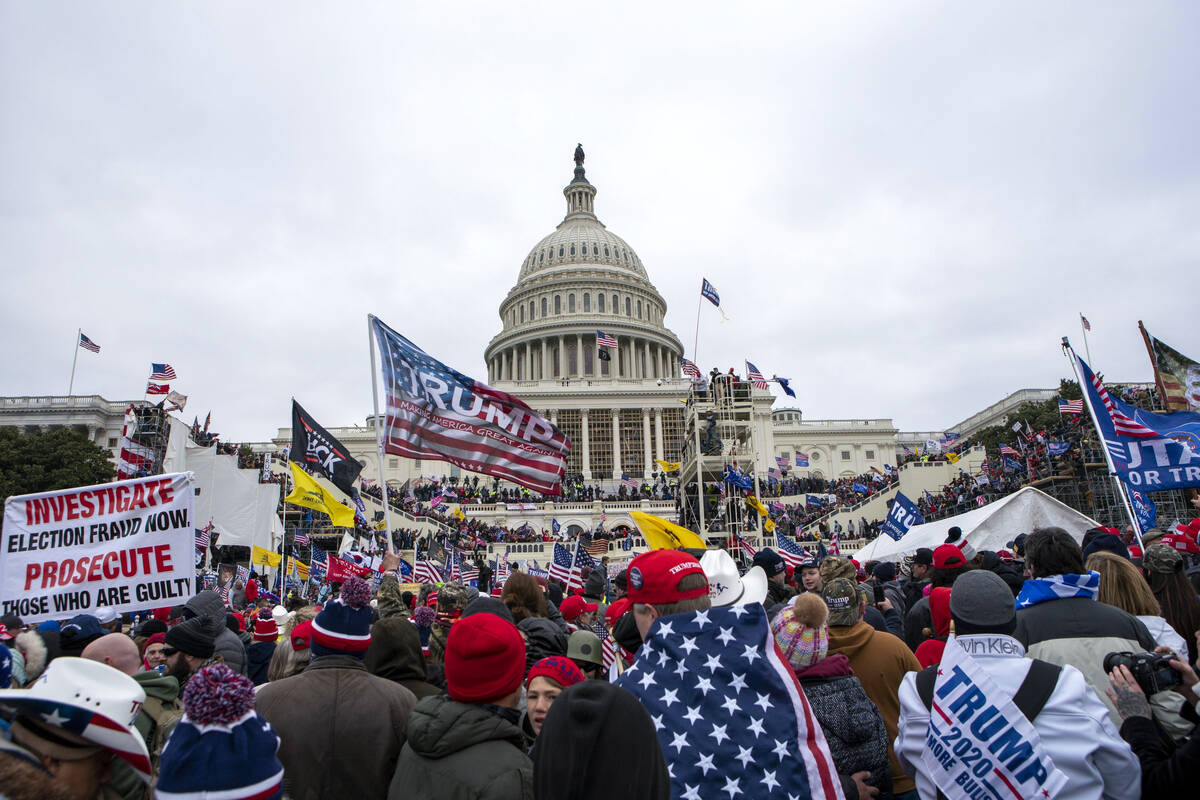 FILE - Rioters loyal to President Donald Trump rally at the U.S. Capitol in Washington on Jan. 6, 2021. The trial of the founder of the Oath Keepers, Stewart Rhodes, and four associates charged with seditious conspiracy in the attack on the U.S. Capitol is set to begin next week. (AP Photo/Jose Luis Magana, File) 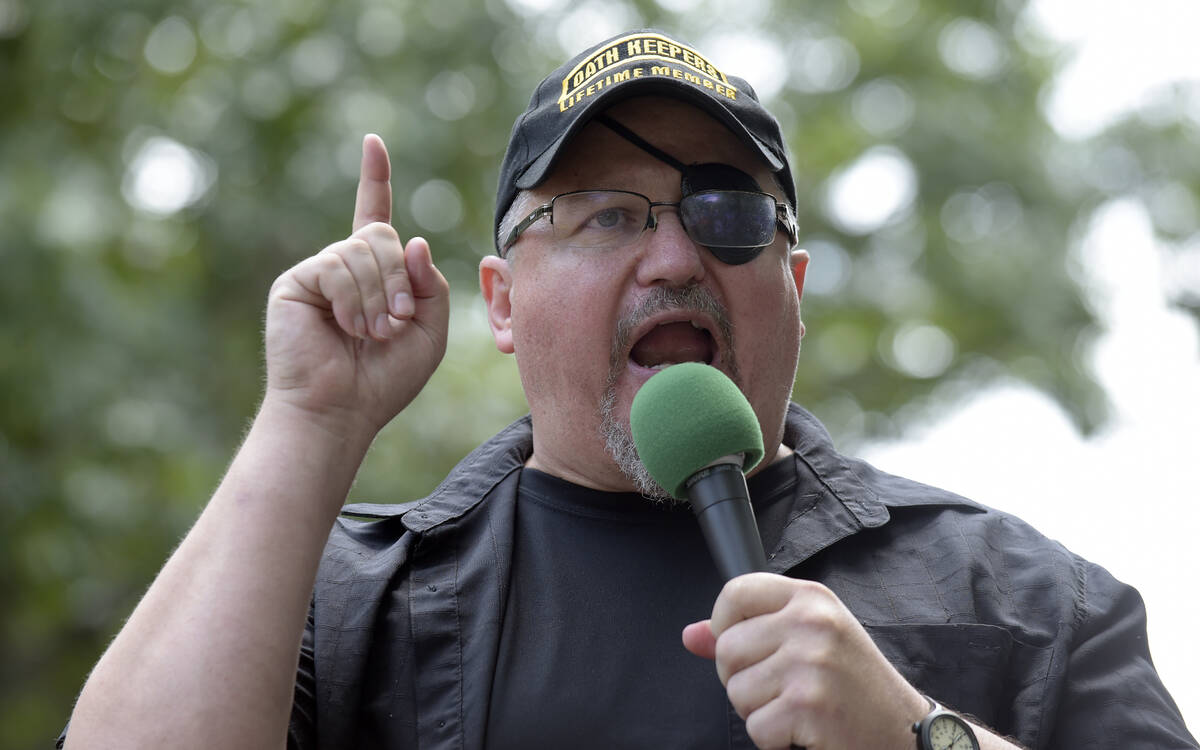 The voting was over and almost all ballots were counted. News outlets on Nov. 7, 2020, had called the presidential race for Joe Biden. But the leader of the Oath Keepers extremist group was just beginning to fight.

Convinced the White House had been stolen from Donald Trump, Stewart Rhodes exhorted his followers to action.

“We must now … refuse to accept it and march en-mass on the nation’s Capitol,” Rhodes declared.

Authorities allege Rhodes and his band of extremists, which was formed more than a decade earlier in Las Vegas, would spend the next several weeks after Election Day, Nov. 3, amassing weapons, organizing paramilitary training and readying armed teams with a singular goal: stopping Biden from becoming president.

Their plot would come to a head on Jan. 6, 2021, prosecutors say, when Oath Keepers in battle gear were captured on camera shouldering their way through the crowd of Trump supporters and storming the Capitol in military-style stack formation.

Court documents in the case against Rhodes and four co-defendants — whose trial opens Tuesday with jury selection in Washington’s federal court — paint a picture of a group so determined to overturn Biden’s victory that some members were prepared to lose their lives to do so.

It’s the biggest test for the Justice Department’s efforts to hold accountable those responsible for the Capitol attack. Rioters temporarily halted the certification of Biden’s victory by sheer force, pummeling police officers in hand-to-hand fighting as they rammed their way into the building, forcing Congress to adjourn as lawmakers and staff hid from the mob.

Despite nearly 900 arrests and hundreds of convictions in the riot, Rhodes and four Oath Keeper associates — Kelly Meggs, Jessica Watkins, Kenneth Harrelson and Thomas Caldwell — are the first to stand trial on the rare and difficult-to-prove charge of seditious conspiracy.

The Oath Keepers accuse prosecutors of twisting their words and insist there was never any plan to attack the Capitol. They say they were in Washington to provide security at events for figures such as Trump ally Roger Stone before Trump’s big outdoor rally near the White House on Jan. 6. Their preparations, training, gear and weapons were to protect themselves against potential violence from left-wing antifa activists or to be ready if Trump invoked the Insurrection Act to call up a militia.

Rhodes’ lawyers have signaled their defense will focus on his belief that Trump would take that action. But Trump never did, so Rhodes went home, his lawyers have said.

On Nov. 9, 2020, less than a week after the election, Rhodes held a conference call and rallied the Oath Keepers to go to Washington and fight. He expressed hope that antifa (anti-fascist) activists would start clashes because that would give Trump the “reason and rationale for dropping the Insurrection Act.”

“You’ve got to go there and you’ve got to make sure that he knows that you are willing to die to fight for this country,” Rhodes told his people, according to a transcript filed in court.

By December, Rhodes and the Oath Keepers had set their sights on Congress’ certification of the Electoral College vote on Jan. 6, prosecutors say.

On Dec. 23, he published an open letter on the Oath Keepers website declaring that “tens of thousands of patriot Americans, both veterans and nonveterans” would be in Washington. He warned they might have to “take to arms in defense of our God given liberty.”

As 2021 approached, Rhodes spent $7,000 on two night-vision devices and a weapon sight and sent them to someone outside Washington, authorities say. Over several days in early January, he would spend an additional $15,500 on guns, magazines, mounts, sights and other equipment, according to court documents.

‘Use lethal force if necessary’

Rhodes had instructed Oath Keepers to be ready, if asked, to secure the White House perimeter and “use lethal force if necessary” against anyone, including the National Guard, who might try to remove Trump from the White House, according to court documents.

On Jan. 5, Meggs and the Florida Oath Keepers brought gun boxes, rifle cases and suitcases filled with ammunition to the Virginia hotel where the “quick reaction force” teams would be on standby, according to prosecutors. A team from Arizona brought weapons, ammunition, and supplies to last 30 days, according to court papers. A team from North Carolina had rifles in a vehicle parked in the hotel lot, prosecutors have said.

Some members of the first stack headed toward the House in search of Speaker Nancy Pelosi, D-Calif., but couldn’t find her, according to court documents. Members of the second stack confronted officers inside the Capitol Rotunda, prosecutors allege.

Rhodes isn’t accused of going inside the Capitol but was seen huddled with members outside after the riot. Rhodes and others then walked to the nearby Phoenix Park Hotel, prosecutors say.

In a private suite there, Rhodes called someone on the phone with an urgent message for Trump, according to an Oath Keeper who says he witnessed it. Rhodes repeatedly urged the person on the phone to tell Trump to call upon militia groups to fight to keep the president in power, court papers say. The person denied Rhodes’ request to speak directly to Trump.

“I just want to fight,” Rhodes said after hanging up, according to court papers. Authorities have not disclosed the name of the person they believe Rhodes was speaking to on the call.

That night, Rhodes and other Oath Keepers went to dinner in Virginia. In messages over the course of the evening, they indicated their fight was far from over.

“Patriots entering their own Capitol to send a message to the traitors is NOTHING compared to what’s coming,” Rhodes wrote.

Rhodes returned to Texas after the Jan. 6 attack and remained free for a year before his arrest in January 2022.

In interviews before he was jailed, he sought to distance himself from Oath Keepers who went inside the Capitol, saying that was a mistake. He also continued to push the lie the election was stolen and said the Jan. 6 investigation was politically motivated.