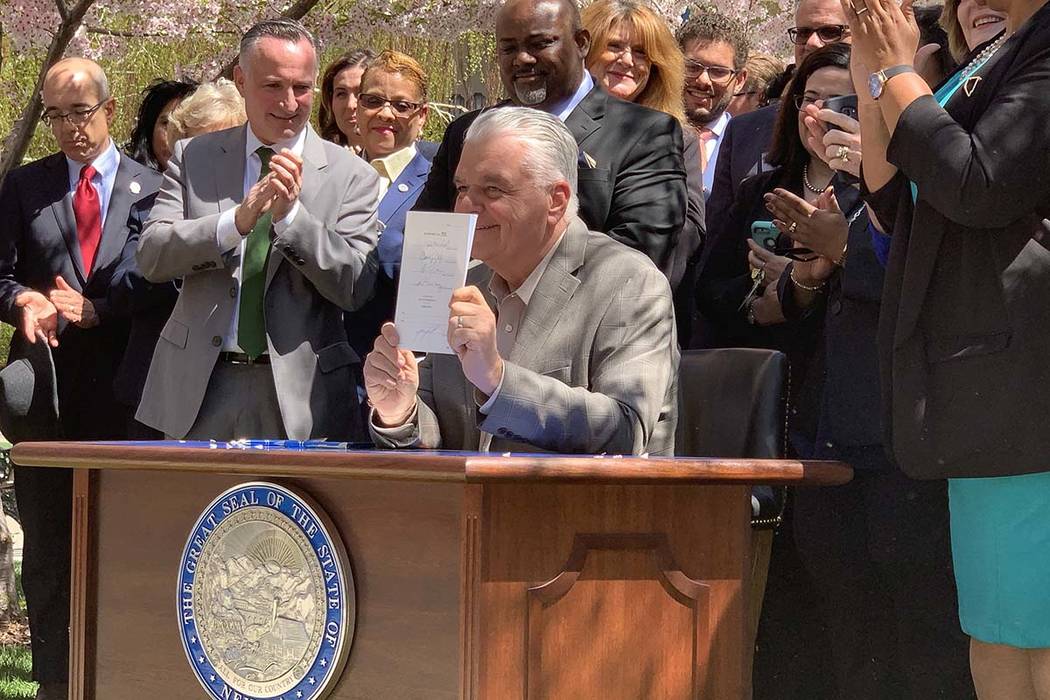 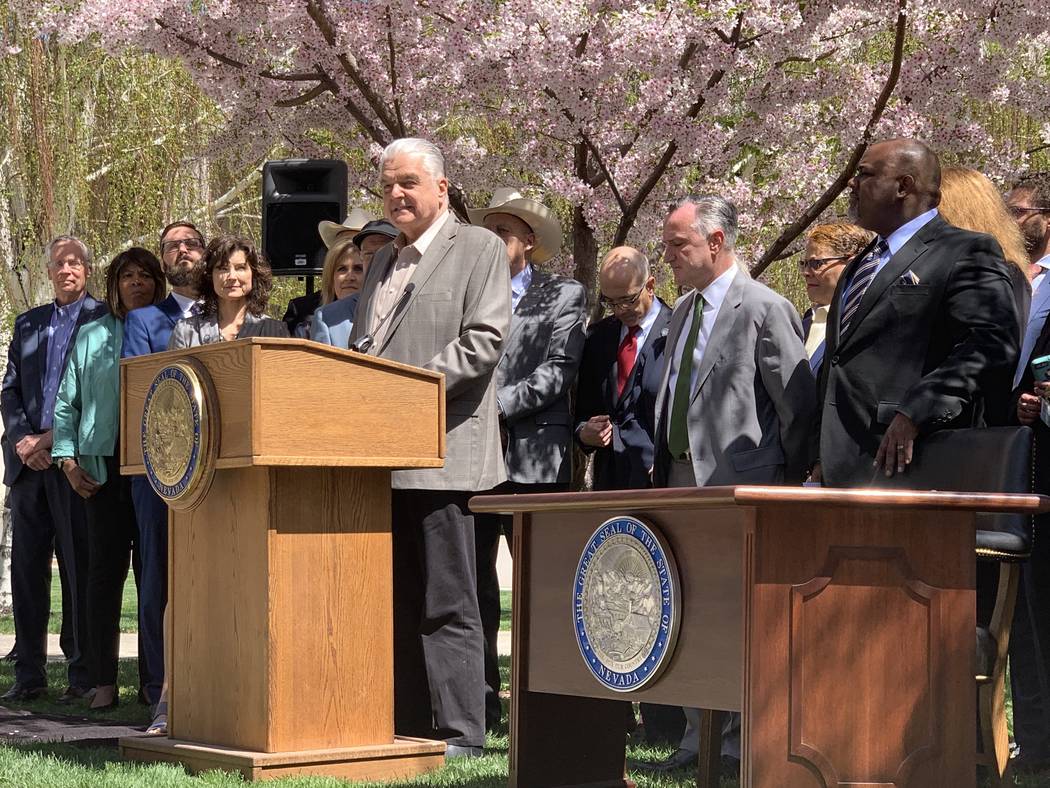 Nevada Gov. Steve Sisolak speaks Monday in Carson City at the signing of a bill committing the state to run on at least 50 percent renewable energy by 2030. The governor signed the bill on Earth Day. April 22, 2019 (Bill Dentzer/Las Vegas Review-Journal) 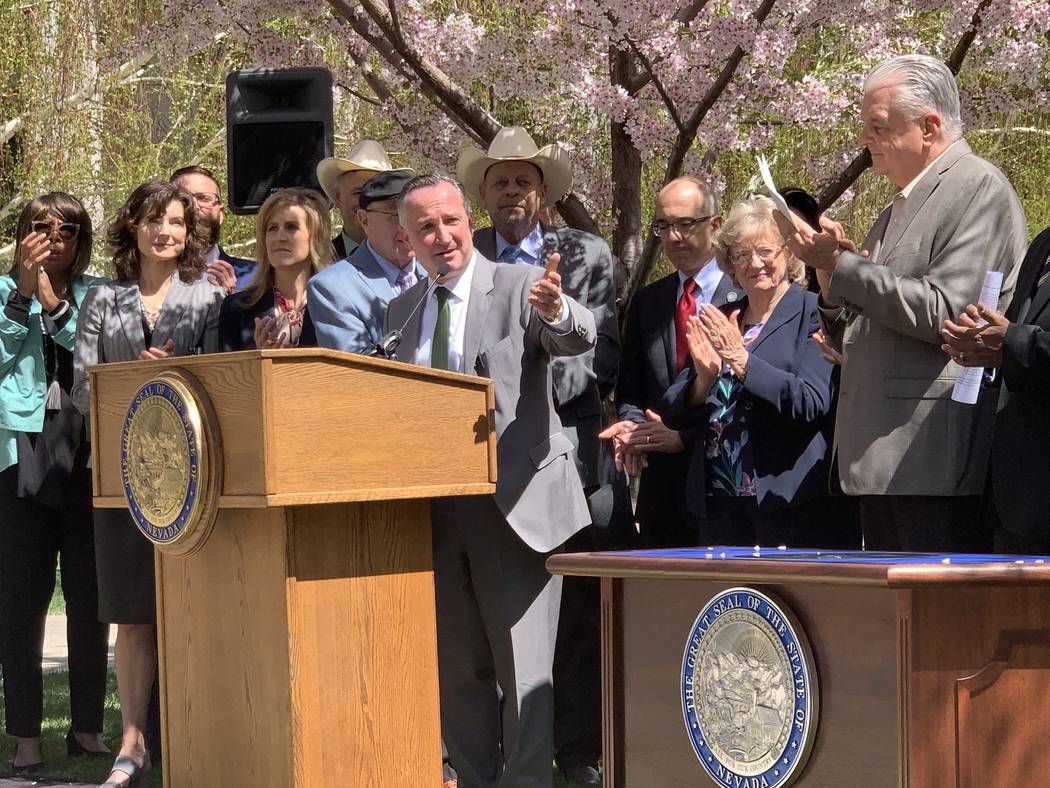 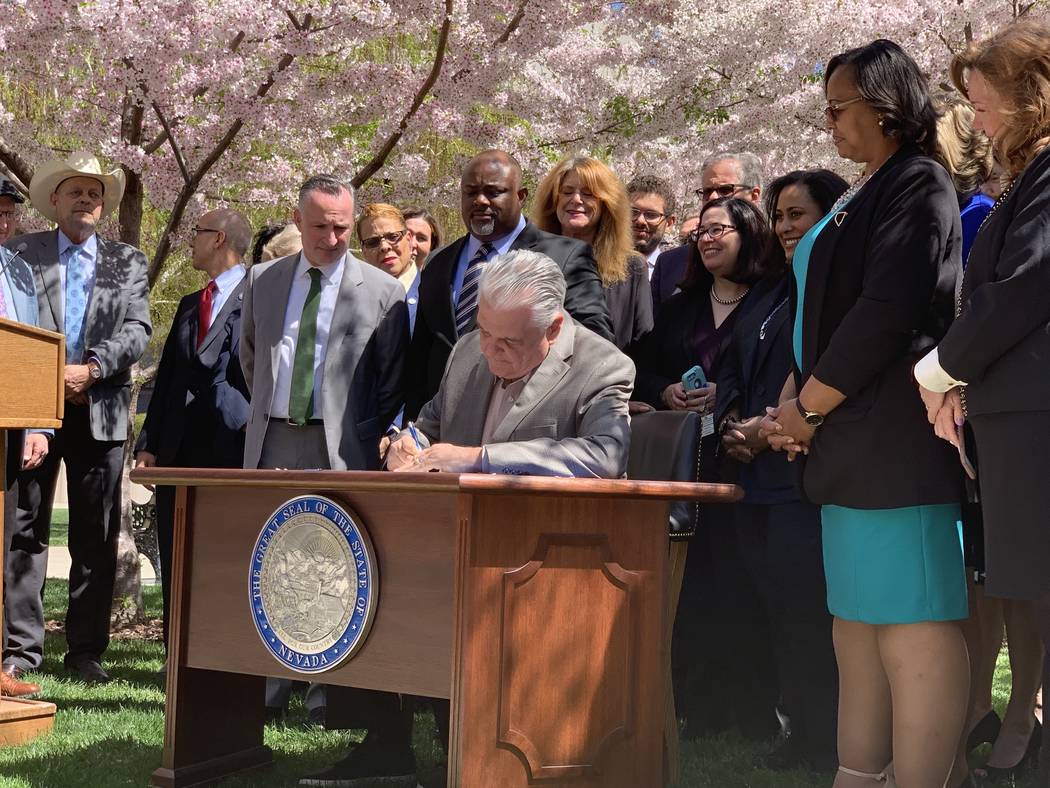 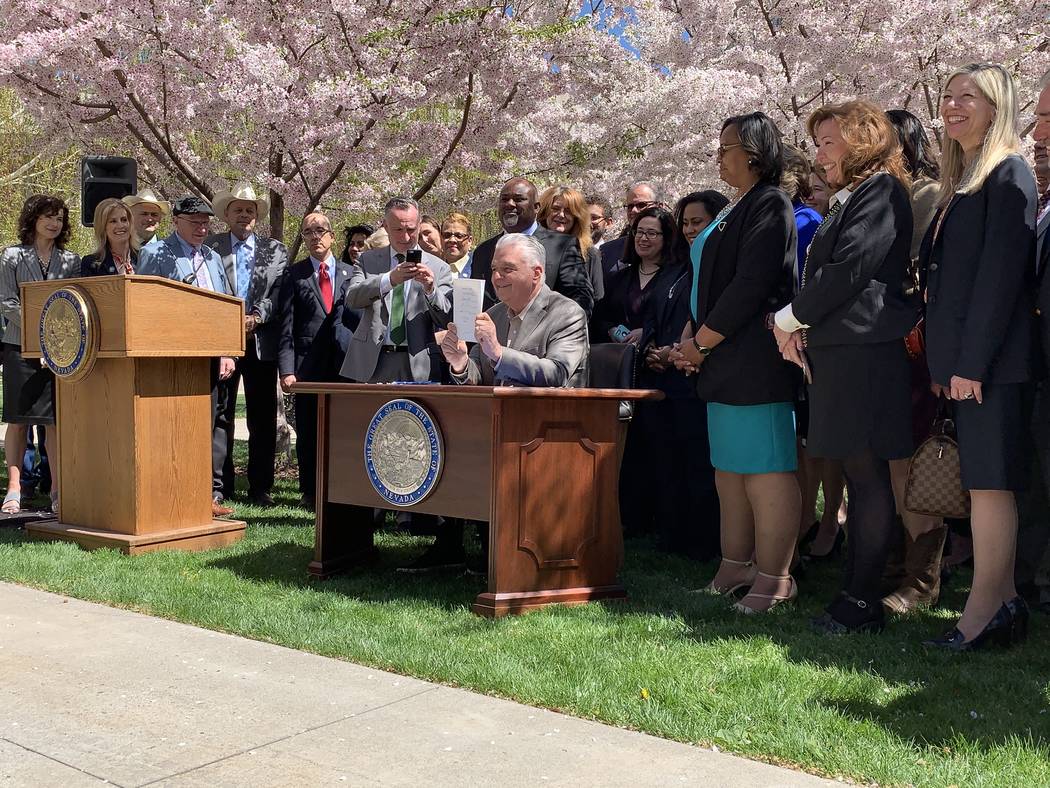 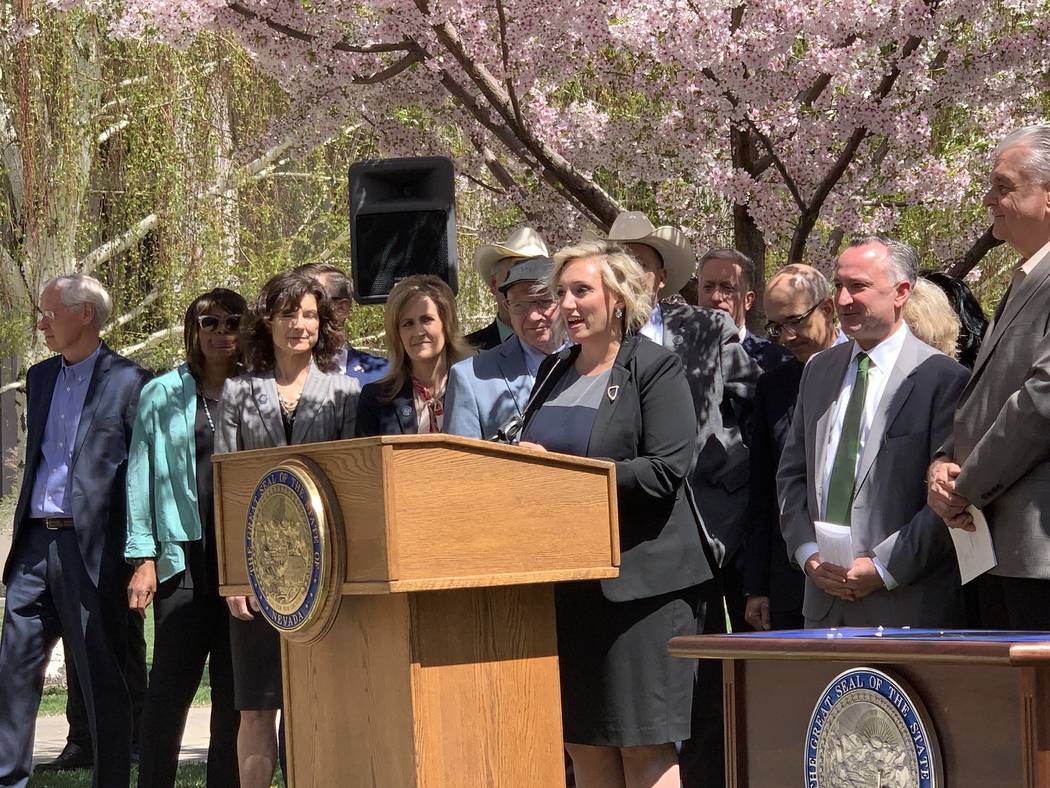 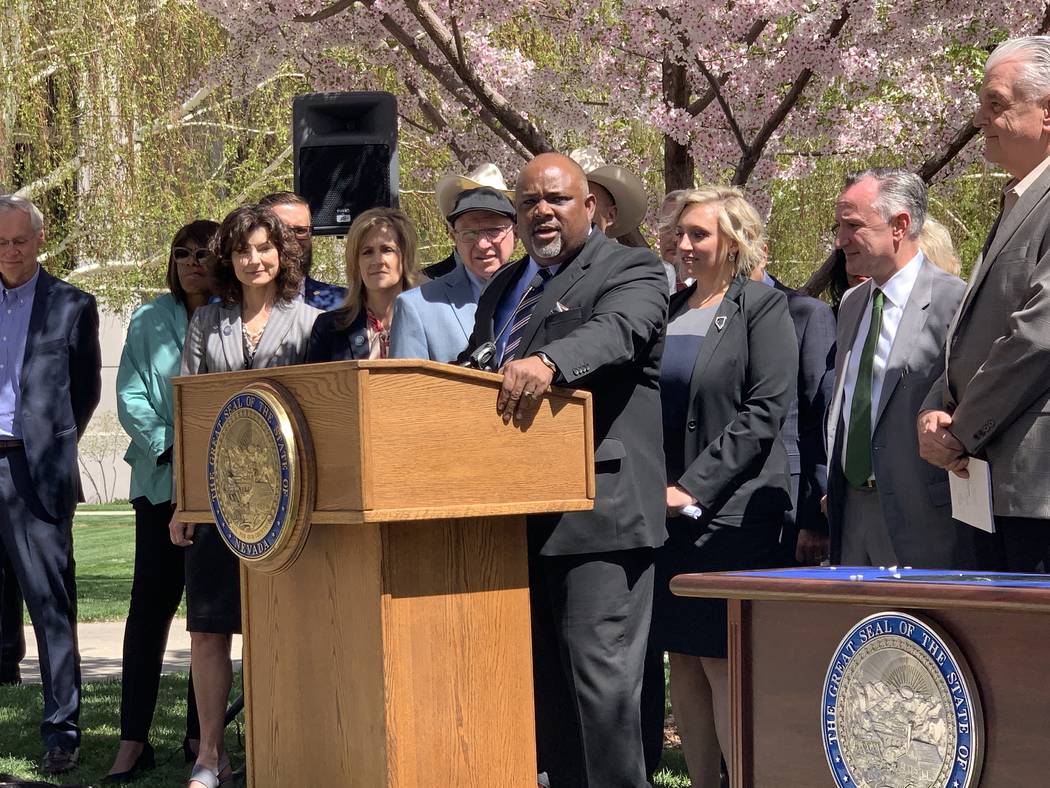 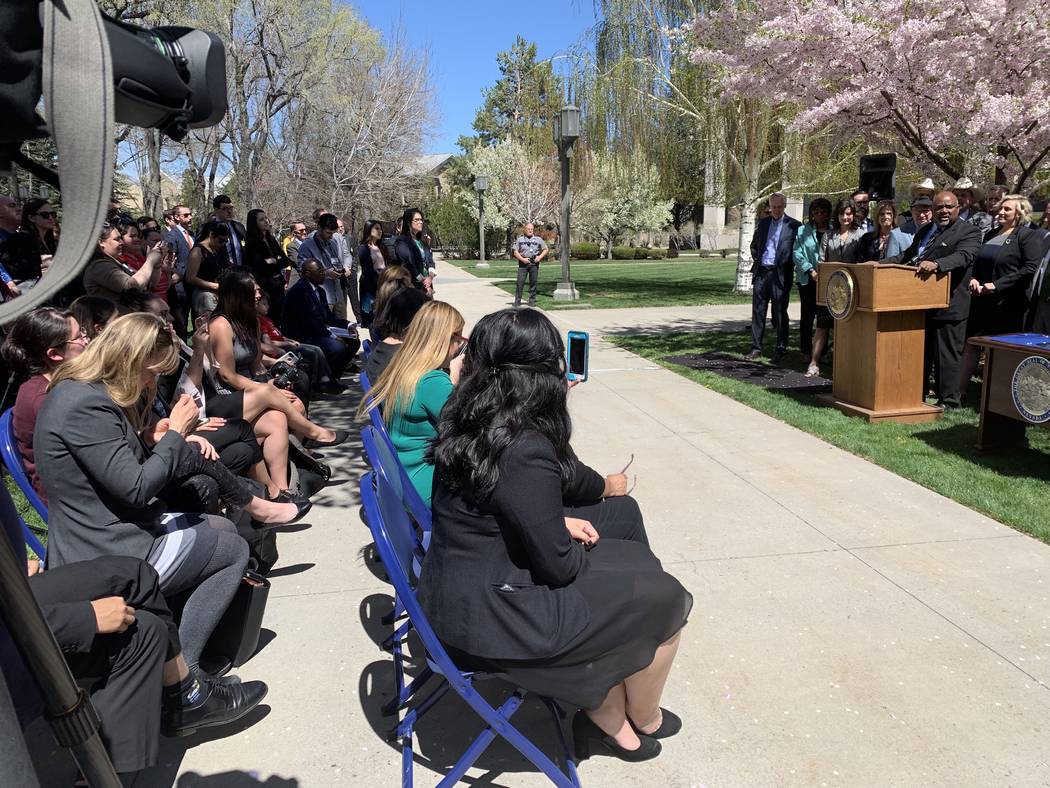 CARSON CITY — On the day set aside for protecting the environment, Nevada took another step toward reducing its own carbon footprint.

Surrounded by lawmakers and newly-flowering trees on the grounds of the State Capitol complex, Gov. Steve Sisolak on Monday signed Senate Bill 358 into law.

The bill, which was unanimously approved by both chambers of the Legislature, raises Nevada’s renewable portfolio standard, or RPS, to 50 percent by 2030. That means that utility providers will need to get at least half of the energy they produce from renewable sources like solar and wind.

The bill signing took place on Earth Day, celebrated annually across the globe to show support for environmental protection and sustainability policies.

“It’s a proud day for all of us here,” Sisolak told reporters after signing the bill. “It’s an exciting time, especially on Earth Day, such a beautiful day. We realize that we have to continue to protect our environment and have our RPS up to 50 percent.”

The signing was lauded by progressive and environmentalist groups as a major step for the Silver State.

“On this Earth Day, I am thrilled to watch as Nevada takes a giant leap forward into our clean energy future,” said Annette Magnus, executive director of the liberal group Battle Born Progress. “Raising the RPS is the first step of many to ensure our state is run on homegrown, clean energy for future generations.”

And it will also help boost Nevada’s economy and job market, he added.

“NV Energy has been vocal about our aspirational goal of providing our customers with 100 percent renewable energy, and this is an important step in accomplishing that,” Doug Cannon, the company’s president and CEO, said in a statement.

Katie Robbins, campaign manager for the group pushing for Question 6, said she is confident that voters will approve it once again in 2020. If approved again by voters next year, Question 6 would not prevent future legislatures from passing laws that raised the state’s RPS above 50 percent, she added.

And with the language in the constitution and state law, Nevadans can be assured the RPS won’t drop below 50 percent in the future, she said.

“We saw that voters overwhelmingly want this and we are really excited that we were able to work with the coalition to get it done sooner so Nevadans don’t have to wait to go back to the ballot box in 2020. They get to have it now,” Robbins said.