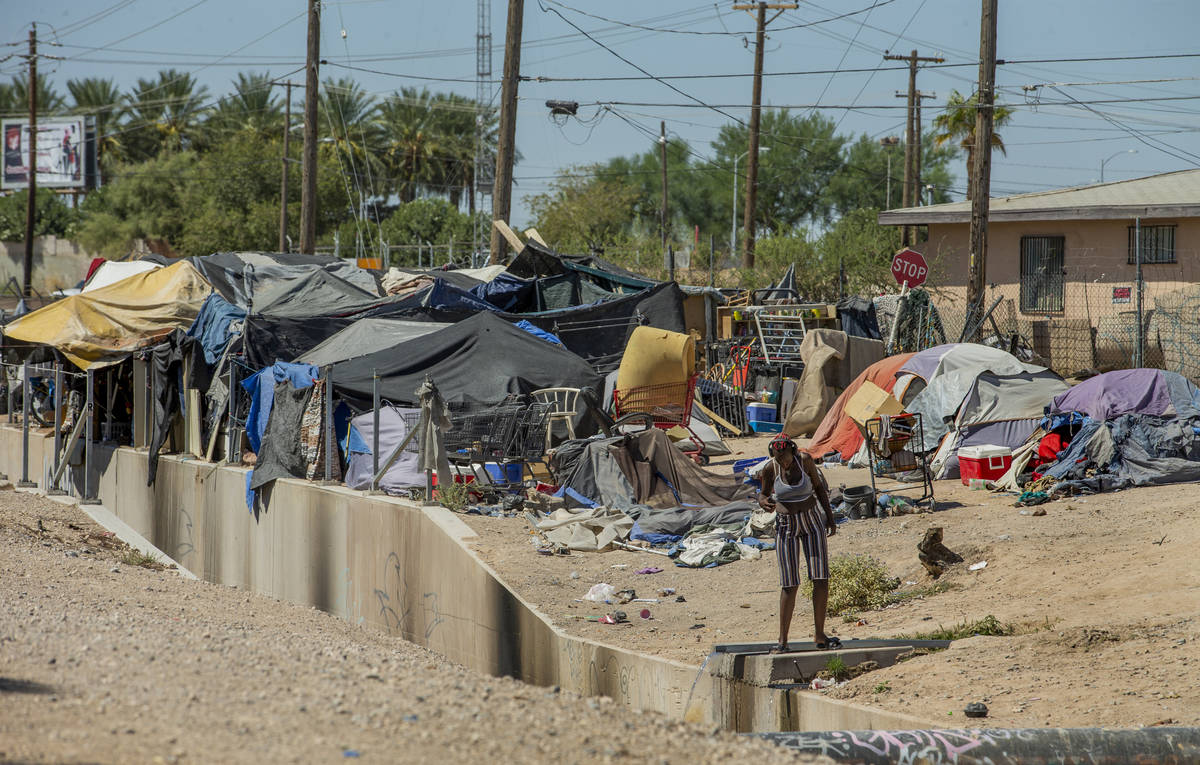 Homeless people begin their day as members of Food Not Bombs and the Sidewalk Project work to construct more huts for their housing at an encampment adjacent to the I-15 north of West Owens Avenue on Saturday, August 15, 2020, in Las Vegas. (L.E. Baskow/Las Vegas Review-Journal) @Left_Eye_Images

Southern Nevada faces a $342 million annual shortfall to effectively tackle a homelessness crisis that regional officials continue to fear will be worsened by the coronavirus pandemic, according to a report heard by county and city lawmakers this week.

Now begins an ambitious new effort: Working together to secure the money at a time when a public health crisis will also require serious financial attention.

Local government and social service leaders, who prepared the report with community involvement, studied strategies to reduce homelessness in a dozen meetings in the past year. And they suggested potential funding sources to close the gap, including a tax or fee on professional sporting events or new housing construction.

It was a multi-jurisdictional effort required by the state Legislature, which gutted a bill last year to boost funding for homeless services in the city of Las Vegas and, in exchange, called for local leaders to collaboratively address the regional problem. More than 6,000 people on any given night in the region are estimated to be experiencing homelessness, an issue expected to be intensified by the pandemic.

“We did identify during this process, with the pandemic, we expect to see a significant spike over the next six to 12 months in homelessness due to all the impacts we’re seeing to households in Southern Nevada,” Las Vegas City Manager Scott Adams said when he presented the report to the City Council on Wednesday.

The report shows the region is lacking 78,000 affordable housing rental units. But the $342 million shortfall for Year 1, identified by Las Vegas-based research consultant Applied Analysis, also included other elements to homelessness such as mental health, addiction and case management.

“We have to increase our housing supply, but if we don’t consider the other aspects that go along with homelessness, then we’ll have failed,” Clark County Commissioner Justin Jones said Tuesday, when the commission was presented with the report.

Many of the recommendations for expanding homelessness funding involved state lawmakers, including a request that the Legislature identify a dedicated tax source.

The report, which will be delivered to the state Oct. 1, also suggested stepping up prevention programs, better coordinating homeless tracking data across agencies, maximizing Medicaid reimbursement rates to draw more mental health professionals to Nevada and creating a regional homeless coordinator to oversee renewed efforts to get a grip on the complex issue.

The report indicates that officials believe the current regional tiered-service model — from diversion to home ownership — is effective in addressing homelessness and can be strengthened by reducing caseloads, expanding capacity and bridging funding gaps.

Regional governments have only roughly $55 million available to spend on homelessness per year, including grant funding, according to the report. Clark County, which is the region’s social services provider, covers a majority of those costs.

“The county has shouldered the burden of this because there is an expectation that the county is supposed to do this, but I think it would be so important moving forward that the message rings clear, that this is everyone’s responsibility,” county Commissioner Lawrence Weekly said.

Specifically, Weekly said he was seeking more participation from the Southern Nevada Regional Housing Authority, which oversees public housing in the county.

Local governments, constrained by funding shortages, have sought ways over the past few years to reduce homelessness, including with the Homeless Courtyard in Las Vegas and the county’s earmark of up to $12 million in marijuana business license fees for homeless services.