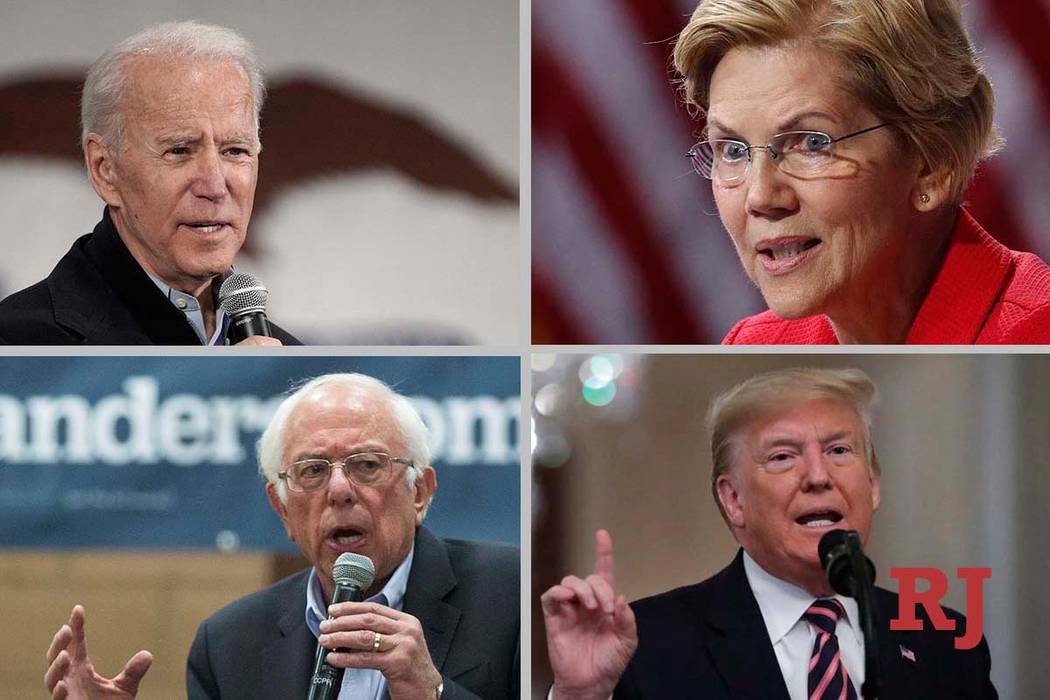 Nonpartisans make up about 22 percent of Nevada’s active voter base and will be essential to either party’s hopes of winning the battleground state this year. The poll, presented in partnership with AARP Nevada and conducted by Washington, D.C.-based WPA Intelligence, is part of “The Middle,” the Review-Journal’s yearlong look at nonpartisan voters.

The poll also shed light on what issues are important to some nonpartisans heading into the 2020 election, as well as their general disapproval of government, disinterest in voting and how they feel about the Democratic field.

Biden, Warren, Sanders and Trump were the most recognizable candidates for the respondents. Most have already formed clear opinions on the president and his would-be challengers.

Forty-five percent of respondents had a favorable opinion of Trump, compared with 52 percent unfavorable.

“Nevadans are looking for a candidate who can beat Donald Trump,” Biden campaign spokesman Vedant Patel said. “And, consistently, they have trusted Joe Biden to be the candidate to build a broad and diverse coalition necessary to send Donald Trump packing in November.”

The Trump, Sanders and Warren campaigns declined to comment on the poll’s findings.

The rest of the Democratic field was a bit of a mystery to respondents.

About one-third of the group had not heard of or formed an opinion on former South Bend, Indiana, Mayor Pete Buttigieg, who holds a slight lead in Monday’s bitterly contested Iowa caucuses. For Minnesota Sen. Amy Klobuchar, that number was 43 percent.

The poll participants also voiced their displeasure with Congress, with 57 percent choosing unfavorable to 28 percent favorable.

The poll also found that voting Trump out of office was the top issue for 29 percent of respondents, while 10 percent said keeping him in the White House was their main goal. The economy (8 percent), choosing a preferred candidate (8 percent) and civic duty (7 percent) rounded out the voters’ top five listed reasons for heading to the polls.

Trevor Smith, the research director for WPA Intelligence, said the nonpartisan sample group matches up pretty well with a typical general election group, meaning these nonpartisans lean in many of the same ways that Republicans and Democrats do.

About 30 percent of those surveyed identified as conservative, while 43 percent said they were politically moderate and 20 percent considered themselves liberal.

Most said they were lifelong nonpartisans. More than half of the 33 percent of respondents who previously belonged to a party were once Democrats, and 35 percent were previously registered Republicans.

That is, of course, if they voted at all.

A staggering 40 percent of the respondents had not voted in any of the past four elections.

“I think these voters are actually very disengaged,” Smith said. “They don’t pay much attention. They may be really upset about a few certain things, but they’re most worried about taking care of their bottom line — putting food on the table.”

With 92 percent of respondents pledging to “definitely” vote and an additional 7 percent saying they would “probably” vote, Smith said there could be a lot of first-time voters in the sample group.