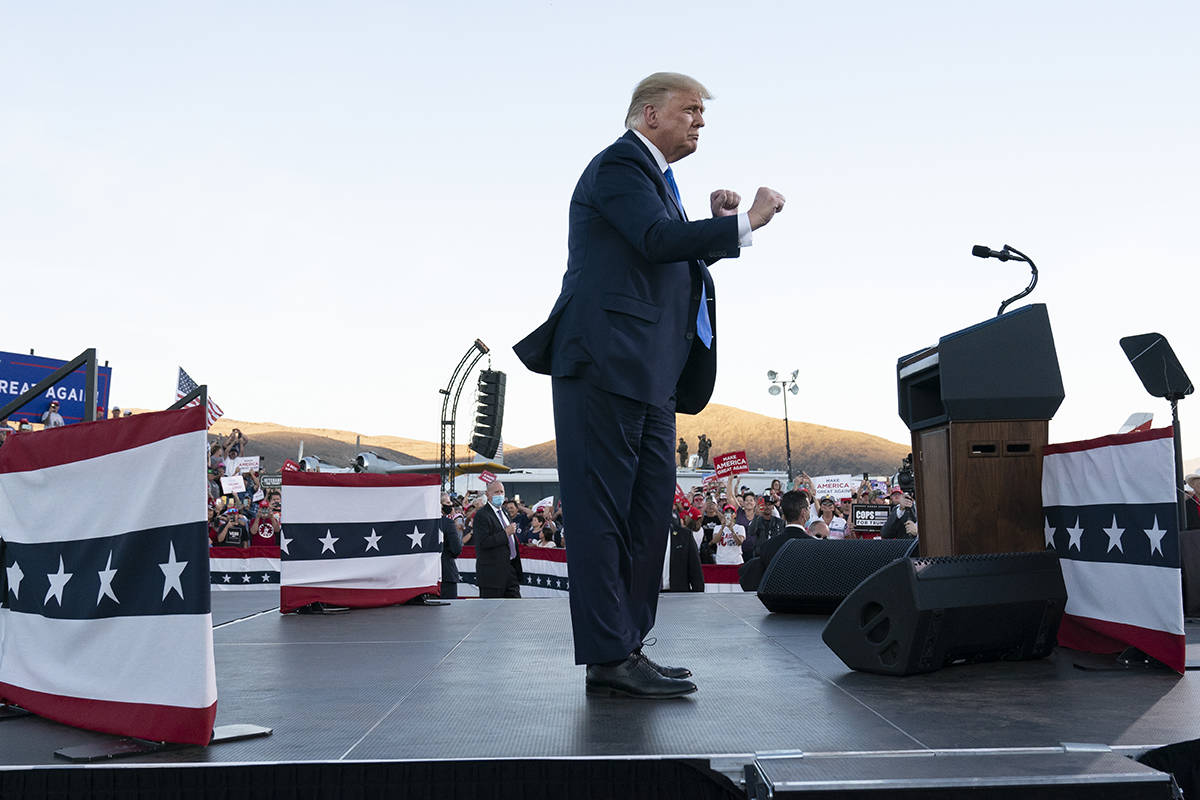 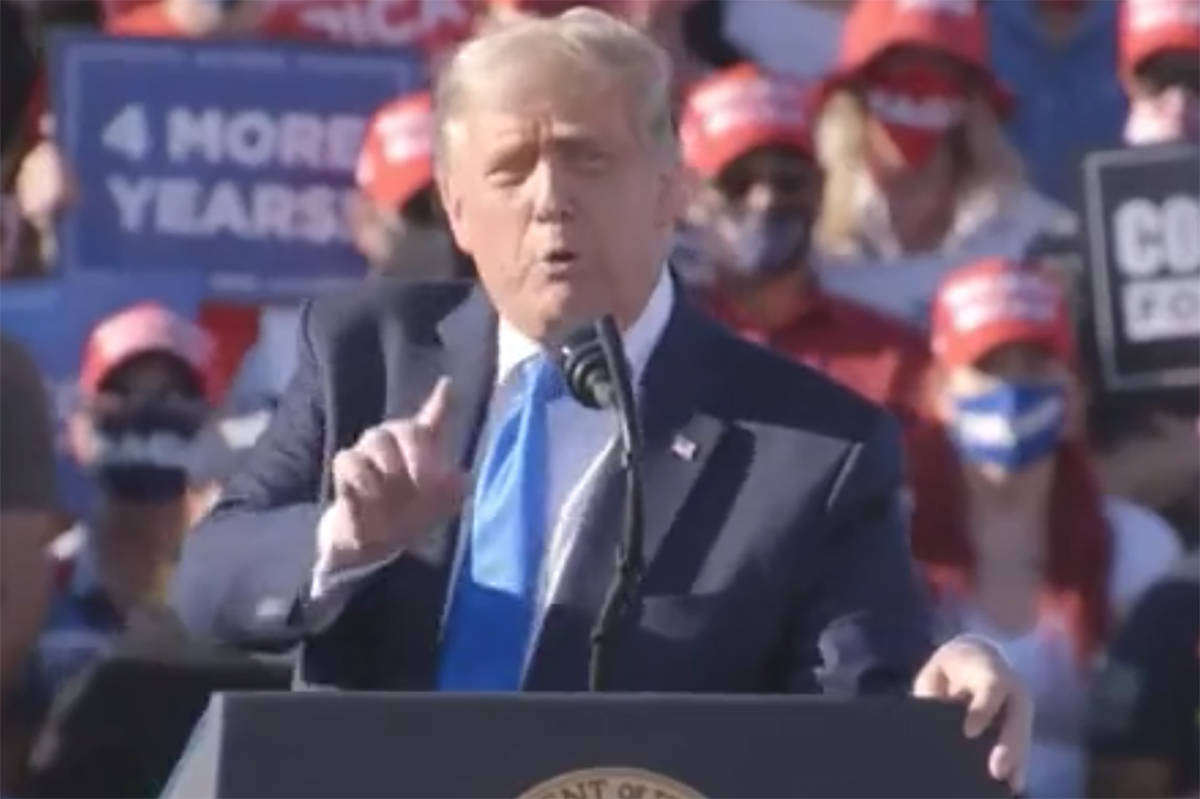 President Donald Trump speaks at a rally on Sunday in Carson City. (Facebook) 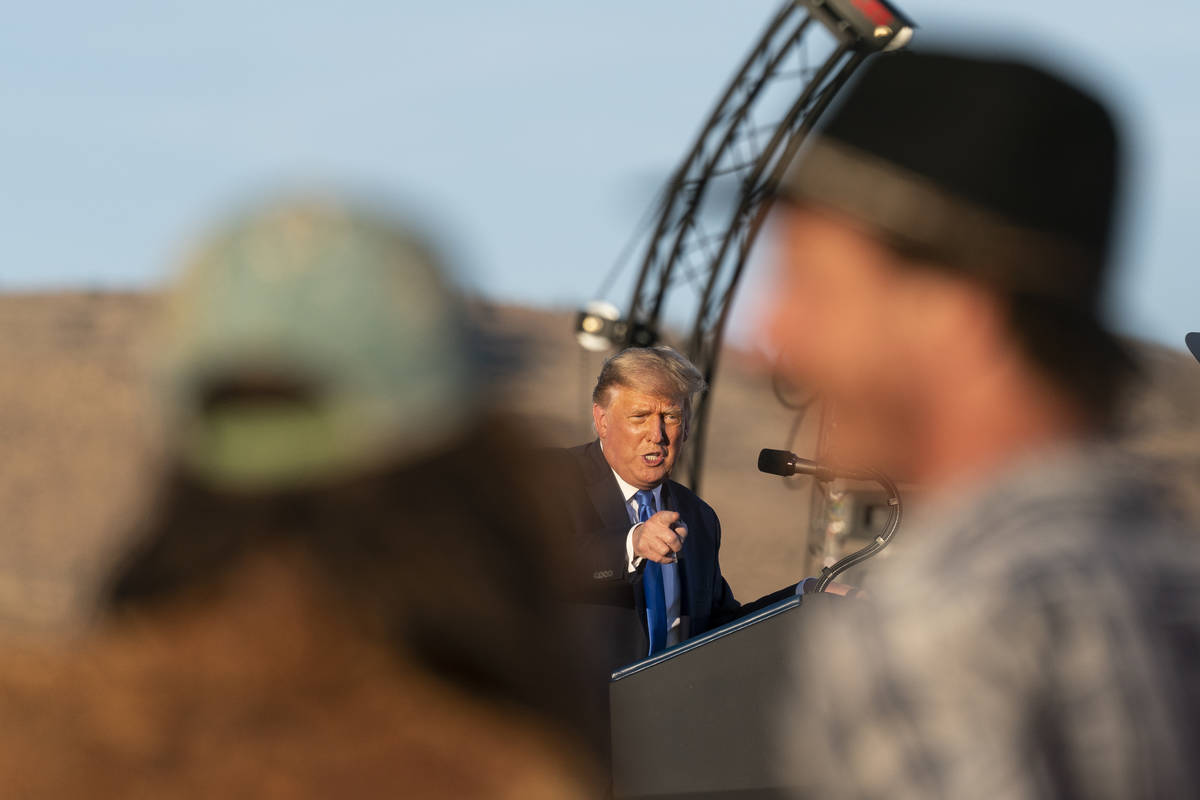 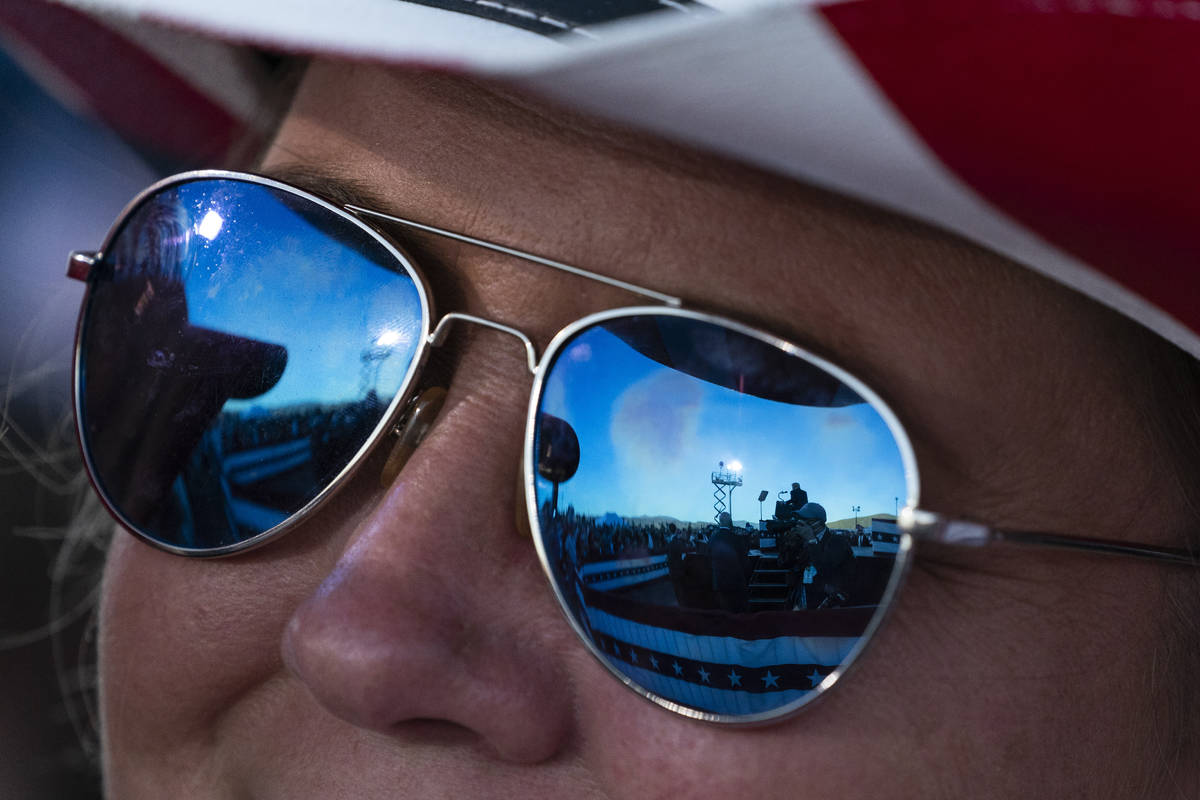 President Donald Trump is reflected in a supporter's sunglasses as he speaks at a campaign rally at Carson City Airport, Sunday, Oct. 18, 2020, in Carson City, Nev. (AP Photo/Alex Brandon)

CARSON CITY — President Donald Trump and Democratic rival Joe Biden went on offense Sunday, as both campaigned in states they are trying to flip during the Nov. 3 election that is just over two weeks away.

Trump began his day in Las Vegas, making a rare visit to church before a fundraiser and an evening rally in Carson City. Once considered a battleground, Nevada has not swung for a Republican presidential contender since 2004.

The rally drew thousands of supporters who sat elbow to elbow, cheering Trump and booing Biden and the press. The vast majority wore no masks to guard against the coronavirus, though cases in the state are on the rise, with more than 1,000 new infections reported Saturday. The president, as he often does, warned that a Biden election would lead to further lockdowns and at one point appeared to mock Biden for saying he would listen to scientists.

Trump’s visit to the state is part of an aggressive schedule of campaign events, where he has leaned heavily into fear tactics.

Trump’s Carson City rally was held at an airport with a golden scrub brush-covered hill providing a dramatic backdrop. He relived fond moments from his 2016 campaign against Hillary Clinton, revisited his long-running feud with NFL players and went on an extended rant about water management policy, which he blamed for people having to “flush their toilet 15 times.”

He also added to his litany of hyperbolic attacks against Biden, claiming that, if Biden were elected, he would mandate new lockdown measures that would make Carson City “a ghost town” and “the Christmas season will be cancelled.”

“How the hell can we be tied?” he asked. “What’s going on? … We get these massive crowds. He gets nobody…. It doesn’t make sense!” Biden has held very small and virtual events in recent months because of the ongoing pandemic.

Biden, a practicing Catholic, attended Mass in Delaware before campaigning in North Carolina, where a Democrat has not won in a presidential race since Barack Obama in 2008.

Both candidates are trying to make inroads in states that could help secure a path to victory, but the dynamics of the race are remarkably stable. Biden enjoys a significant advantage in national polls, while carrying a smaller edge in battleground surveys.

Biden attended a virtual discussion with African American faith leaders from around the country.

Biden held up a rosary, which he said he carries in his pocket every day, and described it as “what the Irish call a prisoner’s rosary” since it was small enough to be smuggled into prisons.

“I happen to be a Roman Catholic,” Biden said. “I don’t pray for God to protect me. I pray to God to give me strength to see what other people are dealing with.”

He noted that Trump had said at one of his rallies that the country had turned the corner on the pandemic.

“As my grandfather would say, this guy’s gone around the bend if he thinks we’ve turned the corner. Turning the corner? Things are getting worse,” Biden said.

Biden started his day with Mass in Delaware at St. Joseph’s on the Brandywine, as he does nearly every week.

If elected, Biden would be only the second Roman Catholic president in U.S. history and first since John F. Kennedy.