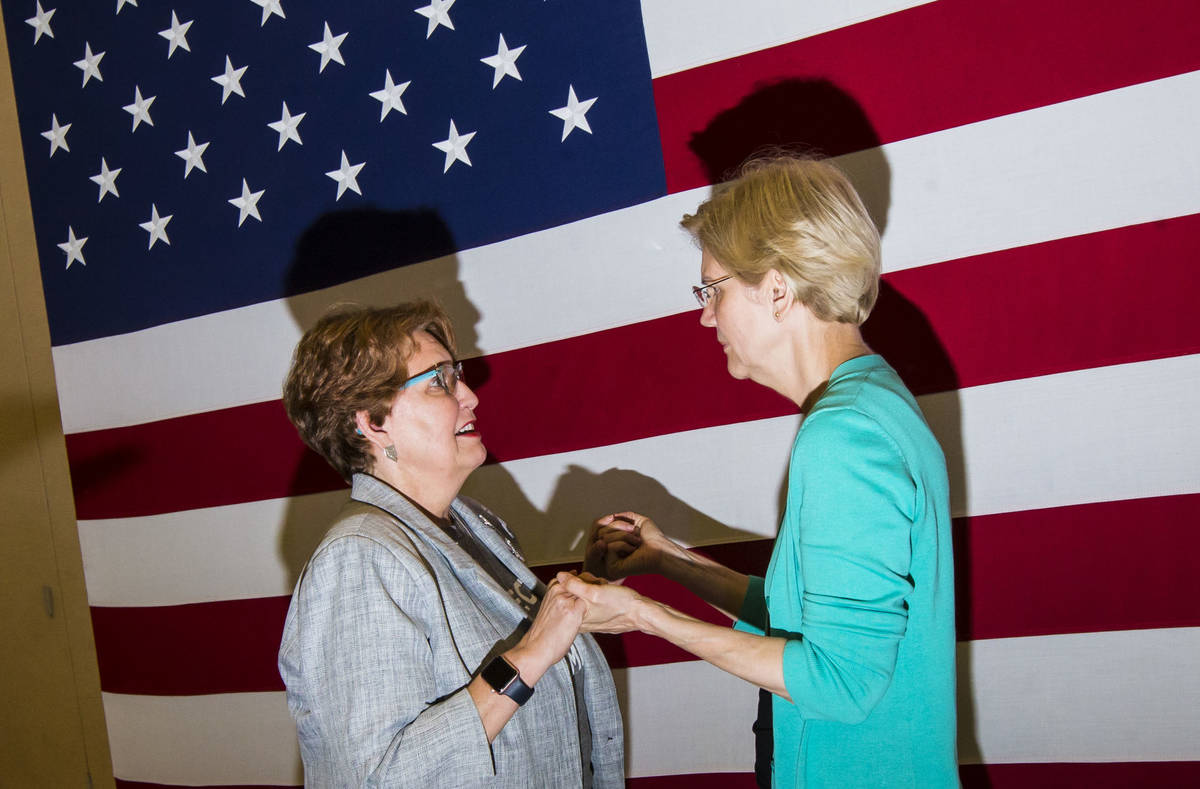 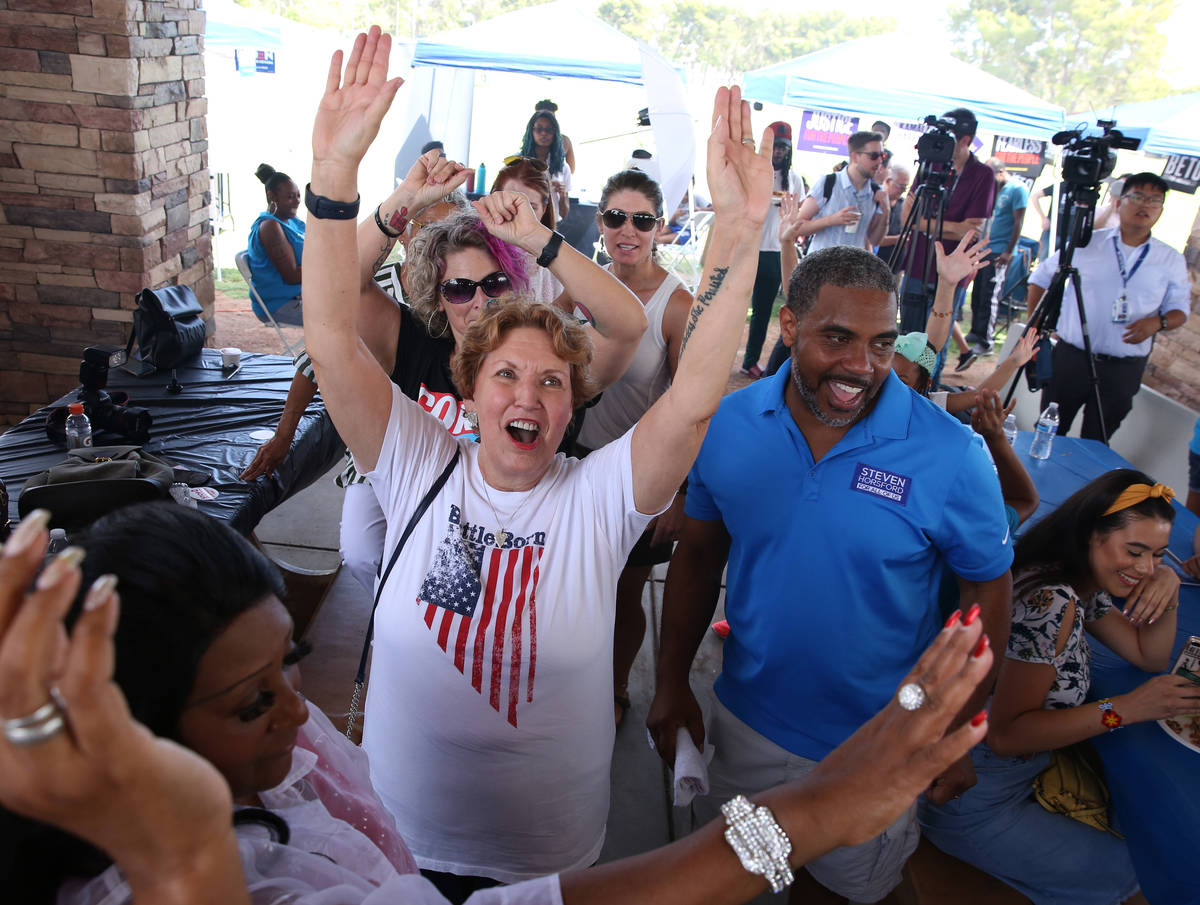 Several key leaders within the Clark County Democratic Party, including Chairwoman Donna West and a handful of executive board and committee heads, have resigned as progressive leadership within both the county and state parties has swelled in recent months.

Gabrielle d’Ayr, formerly the county party’s 1st vice chair, confirmed that she has officially taken over for West, a longtime Democratic political fixture in Southern Nevada. West submitted her resignation to d’Ayr in an email on June 30.

The newly minted chair also received a resignation from Matt Kimball, the party’s 3rd vice chair, on June 30. Other recent departures include Treasurer Kara Freedman, who resigned Monday, several members of the party’s rules and bylaws committee and its legal counsel, Elizabeth Brickfield.

D’Ayr declined to give the reasons these members cited for their resignations. Each are still members of the Democratic Party. West and Kimball did not respond to interview requests.

The resignations come after months of infighting between progressives and “establishment” Democrats over policy platforms.

Both the county and state parties emerged from their 2020 conventions with establishment figureheads and progressive majorities on their executive boards, as supporters of Sen. Bernie Sanders outnumbered the more centrist candidates due to his large victory in the party’s February presidential caucuses. And although Sanders will not be the party’s nominee, his supporters are positioned to force their favored policies into platform discussions that they say they’ve been left out of for years.

Both d’Ayr and her only remaining deputy, Second Vice Chair Judith Whitmer, are Sanders delegates, as are the two remaining members of the county party’s executive board: Recording Secretary Asbury Edens and Corresponding Secretary Sakina Turner.

Whitmer and d’Ayr affirmed their support for presumptive Democratic nominee Joe Biden and all other Democrats on the 2020 ticket in interviews on Monday. But both also stressed that a new wave of progressive leadership will now have roles setting policy goals.

“I’m not really surprised the perception is that Bernie delegates have taken over,” d’Ayr said. “But we are all Biden people now, regardless of what has happened, and we’re working to make sure there’s no gap to fill.”

D’Ayr said she’s worked frantically over the past week to gain access to the party’s office, social media and bank accounts after the “surprising resignations.” She appointed new legal counsel, Las Vegas attorney Robert Kern, and is working to set up a special election for the leadership vacancies for the party’s next meeting.

“Nobody is thinking anything but we’ve got a lot of work to do to make sure Donald Trump is out of office and what can I do to help,” d’Ayr said.

Whitmer and d’Ayr agree that friction between the progressives and establishment members came to a head in May, when they say West changed the party’s agreed-upon platform to remove several pro-Palestine planks without a new vote. Both spoke out against the decision publicly, even calling an executive board meeting, which West allegedly refused to attend, where the progressive majority formally opposed the move.

“Progressives feel we need more representation and input, so we were heavily involved in these plank proposals,” Whitmer said. “We want to support Democrats, but we want them to support our principles and the principles of the people.”

Whitmer said she worked to keep more than 1,000 of her fellow Sanders delegates as active members of the party, saying Biden and other Democratic candidates within this state will need progressives’ support in November. This group ran a progressive slate for the 10 vacant positions on the state party’s executive board, winning nine of them, including a victory over Kimball.

Progressives now hold a majority on both the state and county boards. Whitmer soundly beat out Nevada State Democratic Party Chairman William McCurdy II — who was backed by top elected officials including Reps. Susie Lee and Steven Horsford — to serve as chairwoman of the state’s delegation to the Democratic National Convention.

“The state party should be happy about this,” Whitmer said. “They accuse us of not wanting to do the work to get Democrats elected. But once we won, we now see these resignations because they don’t want to work with us.”

She said Nevada progressives have been organizing for years to ensure a new level of cooperation with the establishment Democrats in charge of the local, state and national parties.

“Our primary goal was for everyone to have a seat at the table, and now we’ve earned it,” Whitmer said.

State party spokeswoman Molly Forgey said she looked forward to working with d’Ayr and the remaining county executive board members, saying McCurdy and state party leadership have worked hard since 2017 to “build a platform of unity” after a bitterly contested 2016 primary season.

Forgey said the new makeup of the county and state executive boards makes sense given Sanders success in Nevada. McCurdy recently held a digital meetup with the state board to welcome them, she added.

She said the party has worked to include progressives in leadership and policymaking roles. One of its Democratic National Committee members, Alex Goff, was a Sanders delegate in 2016, for example.

“We have worked to include both progressive and moderate voices, and our party is reflective of that,” Forgey said.