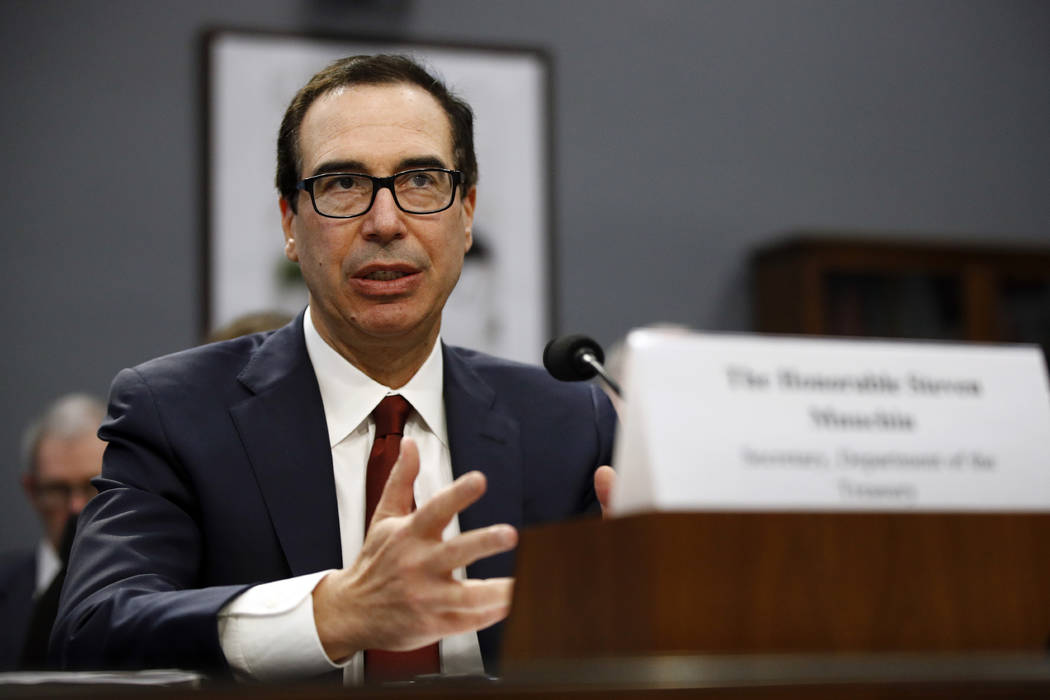 This April 9, 2019, file photo shows Treasury Secretary Steven Mnuchin testifying before a House Appropriations subcommittee during a hearing on President Trump's budget request for Fiscal Year 2020, in Washington. Mnuchin said Monday, April 15, 2019, that the Federal Reserve’s independence is important globally, while refusing to comment on President Donald Trump’s latest attack on the Fed. Mnuchin was asked about Trump’s tweet Sunday that if the Fed had done its job properly, the stock market would be 5,000 to 10,000 points higher and overall growth would have been “well over” 4% last year instead of 3%. (AP Photo/Patrick Semansky, File)

WASHINGTON — President Donald Trump’s administration defied the House Ways and Means Committee’s second deadline of April 23 for the IRS to hand over Trump’s personal and business tax returns from 2013 through 2018.

Treasury Secretary Steven Mnuchin wrote committee Chairman Richard Neal — as he did before the first missed deadline — that his department is waiting for the Justice Department to determine if the request is consistent with federal law.

Neal responded that he would “consult counsel about my next steps.”

It was an episode sure to be repeated regularly through the 2020 election – the Democratic House pushing for more sensitive information on Trump in the name of transparency and Trump refusing to comply because he sees the request as an illegitimate political stunt.

“That’s an issue that already was litigated during the election,” Mulvaney asserted. “Voters knew the president could have given over his tax returns. They knew that he didn’t and they elected him anyway – which, of course, is what drives the Democrats crazy.”

On April 3, the House Ways and Means Committee requested IRS Commissioner Charles Rettig hand over Trump’s returns, in order to assure the effectiveness of the IRS policy of auditing sitting presidents and vice presidents, Neal wrote in his request. “This request is about policy, not politics,” Neal contended.

“My actions reflect an abiding reverence for our democracy and our institutions, and are in no way based on emotion of the moment or partisanship,” Neal added. “I trust that in this spirit, the IRS will comply with federal law and furnish me with the requested documents in a timely manner.”

In fighting this and other subpoenas, Trump’s lawyers have quoted Democratic leaders who promised to subpoena Trump if they won control of the House.

Both sides have cited U.S. Supreme Court rulings to bolster their position.

Neal has quoted the 1975 Eastland decision in which the nation’s top court found, “So long as Congress acts in pursuance of its constitutional power, the judiciary lacks authority to intervene on the basis of the motives which spurred the exercise of that power.”

Mnuchin cited the 1957 Watkins decision that found, “No inquiry is an end to itself; it must be related to, and in furtherance of, a legitimate task of Congress.”

“History demonstrates that private tax return information is susceptible for partisan purposes – regardless of which party is in power,” Mnuchin warned.

The courts have said the Congress can get any information it wants,” University of Virginia law professor Saikrishna Prakash told the Review-Journal.

“I understand that people think the president should release his tax returns because that’s what’s been done before,” Prakash added before he warned of how this tactic can be used in the future.

Imagine if GOP Senate said they want to see the tax returns of House Intelligence Committee chairman Adam Schiff, Prakash said. “(Former Presidents Richard) Nixon and (Barack) Obama were both criticized for abusing the IRS, using the IRS to go after their enemies.”

As the week began, both Trump’s private and administration attorneys fought Democrats’ efforts to compel testimony from individuals who worked for Trump before he won office as well as former White House staffers.

On Monday, Stefan Passantino and William S. Conovoy, attorneys for Trump and the Trump entities, filed a lawsuit against the House Oversight Committee to challenge a subpoena seeking Trump’s tax returns and other financial information from Trump’s personal accounting firm, Mazars, on the grounds that the subpoena “lacks a legitimate legislative purpose.”

The White House informed House Oversight Committee Chairman Elijah Cummings that former personnel security officer Carl Kline would defy a subpoena and not appear for an April 23 interview “if no representative of this office is permitted to attend.” Kline approved the security clearance of White House senior adviser and Trump son-in-law Jared Kushner.

The Washington Post reported that the White House will fight McGahn’s subpoena and others by asserting executive privilege.