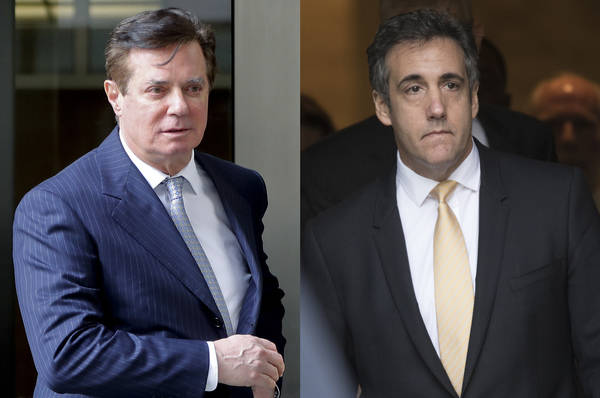 In these 2018 file photos, Paul Manafort leaves federal court in Washington, left and attorney Michael Cohen leaves federal court in New York. The one-two punch ahead of the midterm elections _ the plea from former Trump lawyer Cohen and the fraud conviction of one-time campaign chairman Manafort _ is presenting the biggest loyalty test yet for Republicans who have been reluctant to criticize the president. (AP Photo/File)

WASHINGTON — President Donald Trump took to Twitter Wednesday to strike back at his former private lawyer and offer praise for a former campaign chairman as the White House grappled with the fallout from two legal cases.

In an early morning tweet, Trump offered a piece of advice: “If anyone is looking for a good lawyer, I would strongly suggest that you don’t retain the services of Michael Cohen!”

Cohen is the former private lawyer who pleaded guilty Tuesday to eight charges, including campaign finance violations that he said he carried out in coordination with Trump — which the president denied on Wednesday.

Trump hailed Manafort for refusing to “break” and “make up stories to get a ‘deal.’ Such respect for a brave man,” raising speculation that he could receive a pardon.

There was no such love for Cohen, Trump’s one-time fixer who, as part of a plea deal, alleged that the president had orchestrated a cover-up to buy the silence of two women who claimed he had affairs with them.

The payments were designed to keep the women “silent in advance of the election,” according to the plea agreement, and thus represented illegal in-kind campaign contributions in excess of the $2,700 cap on donations per election.

But Trump told Fox News on Wednesday that he had done nothing wrong. He also said that there were no campaign finance violations — despite Cohen’s guilty plea — because the funds for the payoffs “didn’t come out of the campaign, they came from me.”

At a White House press briefing, reporters peppered Press Secretary Sarah Sanders with questions about Cohen’s guilty plea and the possibility that Trump will pardon Manafort. Sanders said she had no answer on the pardon question.

Sanders also asserted that Trump “did nothing wrong. There are no charges against him” — a phrase she repeated six times.

To Common Cause chief of strategy Stephen Spaulding, the case against Trump is clear: “Cohen pled guilty to two felony campaign violations yesterday. Period,” he told the Review-Journal.

“Here we’re talking about payments that were made at the height of the 2016 campaign cycle,” Spaulding said. “The money was spent for the purpose of influencing the election by keeping damaging information out of the news cycle.”

However, Bradley Smith, a former Federal Election Commissioner who now chairs the Institute for Free Speech, argued that “Paying your mistress blackmail money is simply not a campaign expense.”

If an expense “benefits the campaign, but it’s not an obligation triggered by the campaign,” Smith argued, it is not subject to campaign contribution limits.

Spaulding rejected that argument, noting that both Cohen and the U.S. Attorney for the Southern District of New York agreed that Cohen violated campaign finance law.

Smith surmised, “Why did they want that plea from Cohen? I suspect they wanted that because that’s what got them to Trump.”

In legal circles, observers see similarities to former Sen. John Edwards, D-N.C. In 2012 federal prosecutors charged Edwards with violating campaign finance laws after a big donor paid to cover up his affair with a videographer, who gave birth to their child during Edwards’ 2008 presidential campaign. A jury acquitted Edwards.

Saikrishna Prakash of the University of Virginia’s Miller Center said the president’s defenders will say that Trump, “as a wealthy businessman has paid lots of people to go away.” It’s something Trump had to do “to protect the equity in his brand, his name,” Prakash said.

Both the Cohen and Manafort cases resulted, at least in part, from the work Mueller, who is investigating Russia’s attempts to sway voters in the 2016 election. Trump on Wednesday again denounced the probe as a “witch hunt.”