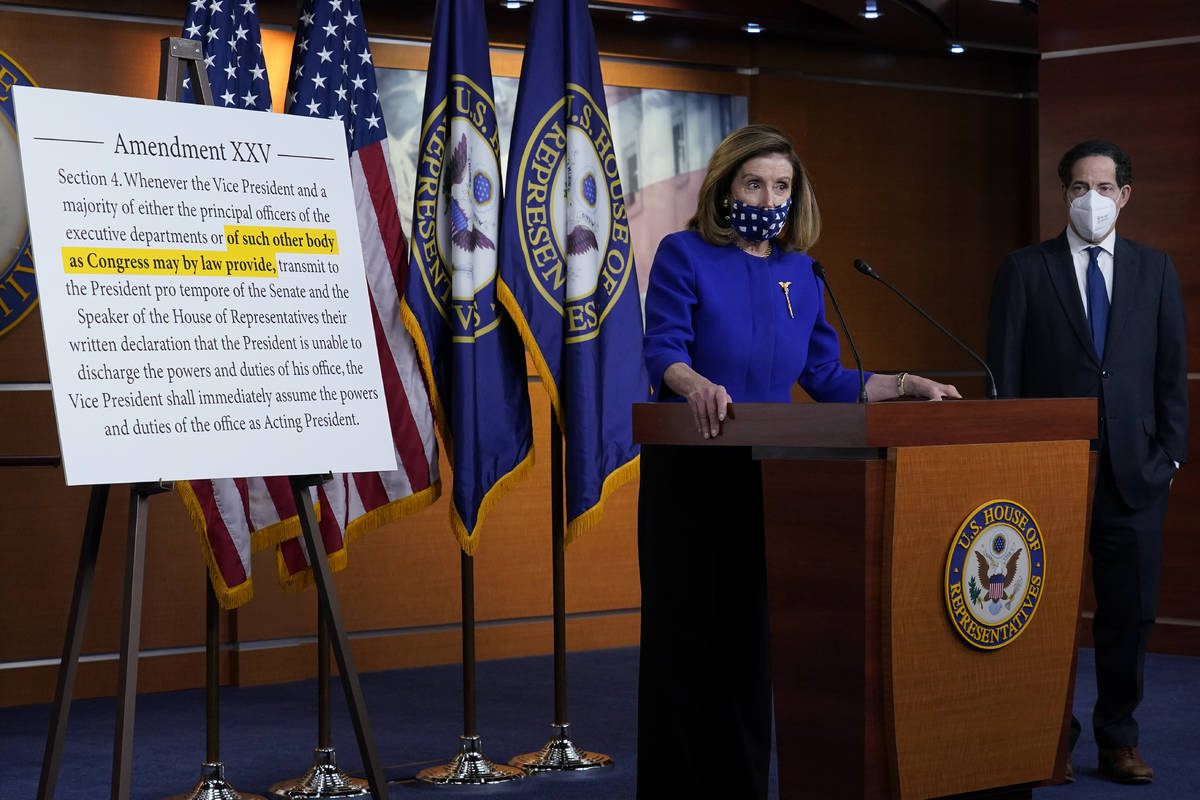 Speaker of the House Nancy Pelosi, D-Calif., speaks during a news conference at the Capitol in Washington, Friday, Oct. 9, 2020. Joined by Rep. Jamie Raskin, D-Md., Pelosi wants legislation that would create a commission to allow Congress to intervene under the 25th Amendment to the Constitution and remove the president from executive duties. (AP Photo/J. Scott Applewhite)

WASHINGTON — During two hours of sweet talk Friday, President Donald Trump and radio talk host Rush Limbaugh commiserated on the “unfairness” of the mainstream news media, potential mischief with mail-in ballots and the need for the right to play hardball as Nov. 3 looms.

“The Republicans have to get tougher. The Democrats play a much dirtier game,” Trump told Limbaugh.

Trump said he believed House Speaker Nancy Pelosi’s support for legislation to establish a commission to weigh in on the removal of a president unable to discharge his duties under the 25th Amendment language was not aimed at him so much as to make it easier to replace former Vice President Joe Biden with his running mate Sen. Kamala Harris, D-Calif., if the Democrats win in November.

“Crazy Nancy Pelosi is looking at the 25th Amendment in order to replace Joe Biden with Kamala Harris,” Trump tweeted ahead of the show. “The Dems want that to happen fast because Sleepy Joe is out of it!!!”

“That’s exactly what it is. It’s a trial run to see if they can kick Biden out,” Limbaugh responded.

During a briefing Friday morning, Pelosi said that her bill would not apply to Trump.

“This legislation applies to future presidents, but we are reminded of the necessity of action by the health of the current president,” she said in reference to Trump’s having been sidelined in the White House as he has recuperated from the coronavirus.

The legislation is “sort of Trump-esque,” added Prakash, author of “The Living Presidency: An Originalist Argument Against its Ever-expanding Powers.”

Last month Cook Political Report analyst Amy Walters reported that she had seen a shift to the right in Florida and Nevada.

But the RealClearPolitics average of polls found Biden ahead of Trump by 2.7 percent in Arizona and 6 percent in Nevada.

Trump and Limbaugh used their time to catalogue ballot and mail mishaps across the country.

There were 70 pounds of mail found in Virginia Beach dumpster. The Virginian-Pilot reported Thursday that the U.S. Postal Service said there were no ballots among the 70 pounds of ditched mail.

Due to a mix-up Westmoreland County in Pennsylvania was late sending out 58,000 mail ballots after other counties mailed out those ballots.

Nationwide, 550,000 absentee ballots were rejected during the presidential primary.

Trump’s call into the Limbaugh show was billed as “the largest radio rally in history,” in deference to the syndicated talk show host’s estimated 15.5 million listeners per week by the reckoning of Talkers Magazine. In a sense, it served as a proxy for campaign rallies Trump did not hold during his recovery.

Later in the day Trump, who was discharged from Walter Reed National Military Medical Center Monday night, tweeted that he would attend a campaign rally in Sanford, Florida for “a very BIG RALLY!”

On Thursday, the president’s doctor Sean Conley released a statement that said Saturday would be Day 10 since Trump’s Oct. 1 “diagnosis, and based on the trajectory of advanced diagnostics the team has been conducting, I fully anticipate the President’s safe return to public engagements at that time.”

ABC News reported that Trump would hold a rally in the South Lawn where he would address activists associated with Blexit, a campaign that urges Black Americans to leave the Democratic Party, from an East Wing balcony. The White House confirmed the report.

“I think the data speak for themselves,” Fauci said. “We had a super-spreader event in the White House, and it was in a situation where people were crowded together, were not wearing masks.”