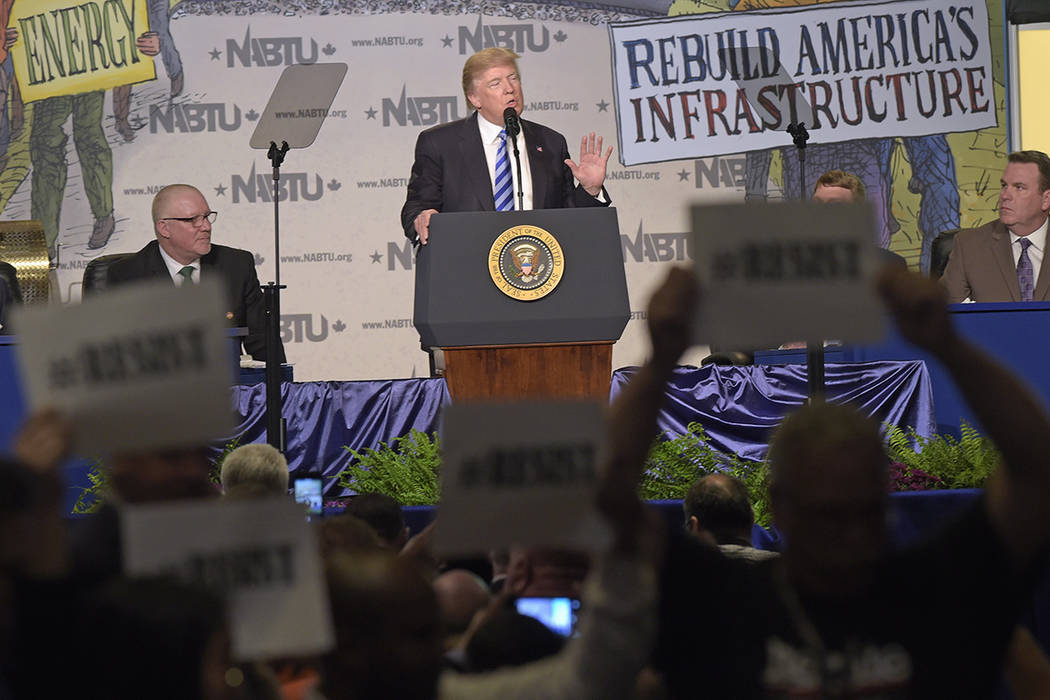 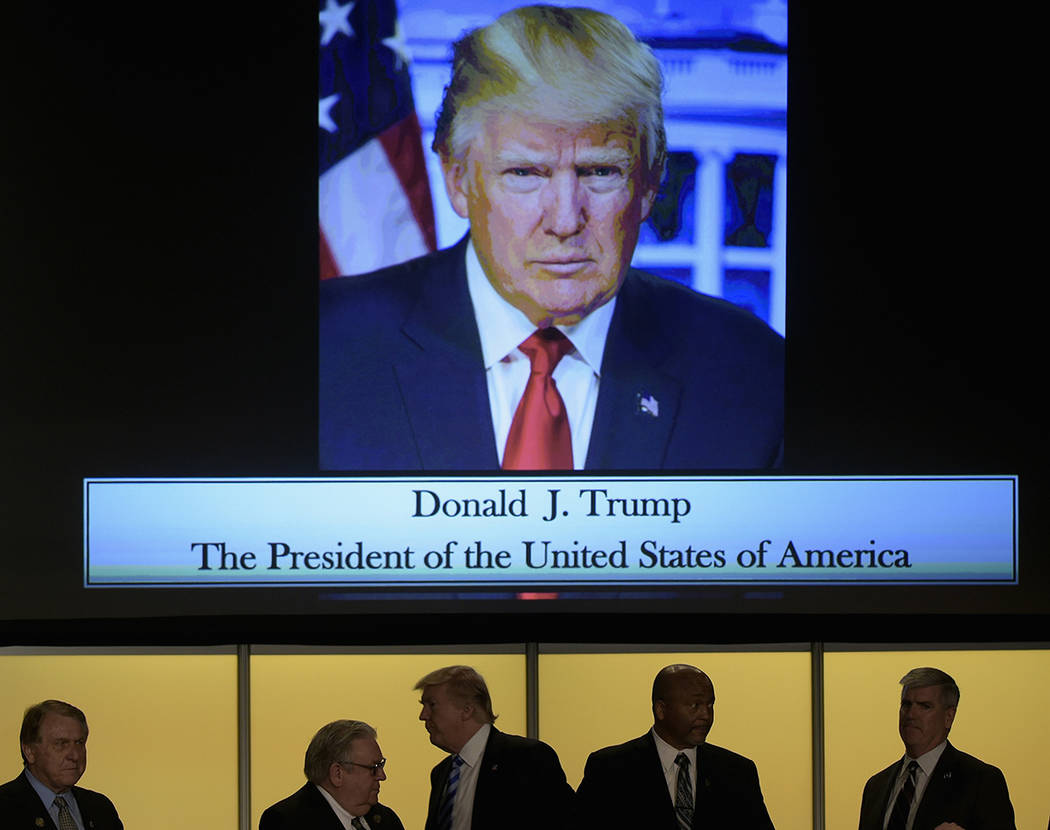 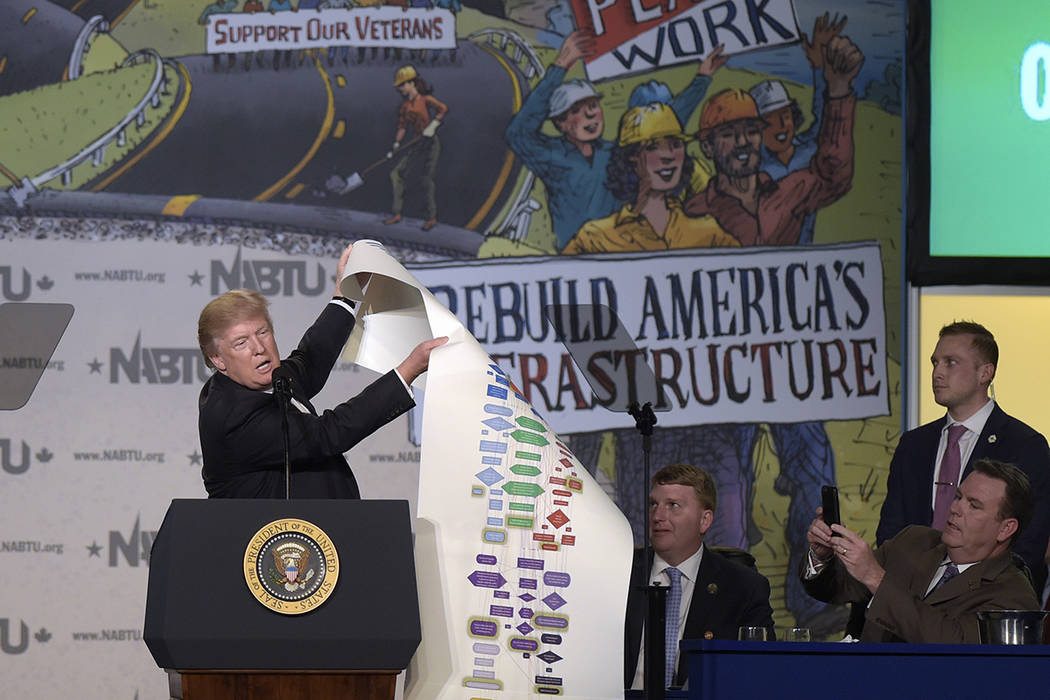 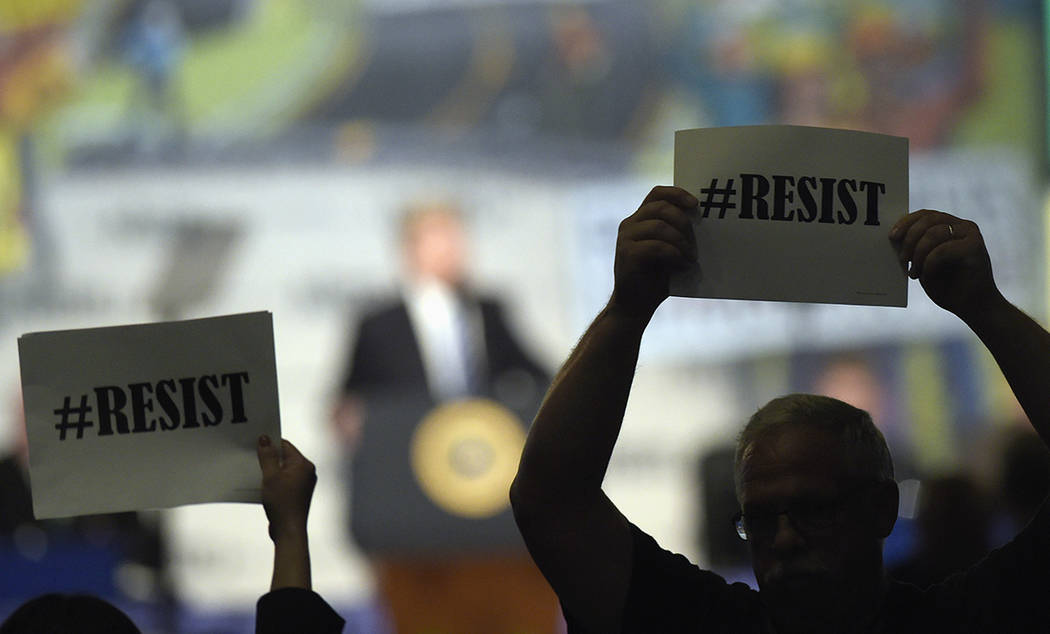 Since winning the Oval Office, Trump has tried to woo labor leaders with the argument that they share a common cause. In his first week in office, Trump invited unions to the White House to celebrate America’s withdrawal from the Trans-Pacific Partnership. At the time, NABTU spokesman Tom Owen told the Huffington Post that over eight years, President Barack Obama had failed to invite him to 1600 Pennsylvania Ave.

Thus Trump entered the Washington Hilton ballroom Tuesday with the confidence of a man who shares a vocabulary with the 3,000 activists in the room. He described himself as “a builder in the White House,” then asked, “Did you ever think you’d see a president who knows how much concrete and rebar you can lay down in a single day?” Only scattered applause followed.

To draw more noise from the construction workers, the real-estate developer shouted out to various professions – laborers, painters, fitters, plumbers, operators, electricians – who cheered in return. “How ’bout the cement masons?” Trump chimed. “And of course, our wonderful Teamsters.”

To tease the occasional standing ovation, Trump had to show his high cards – his preference for American steel, the Keystone pipeline and bilateral trade deals — where the Republican and union leaders are in accord.

At times, Trump was positively poetic about building. He told the construction workers, “You take pride in every part of your work, every joist, bolt and rivet. You’re not only builders, but you’re artisans.” The rugged workers who erected the Empire State Building, he said, could spend the rest of their days looking skyward knowing “somewhere high above the city streets, their place of history was carved into beams of steel.”

As often happens on the stump, Trump harkened back to 2016 as he relived beating the naysayers who predicted he could not win. Listing the states he carried, Trump declared, “I had the support of I would say, I would say, almost everybody in this room.” In place of applause, there were sniggers and boos.

“We didn’t support him,” James Kunz of Pittsburgh, Pennsylvania, said after the speech, but “a lot of our members did.”

Brian Cavey of the Insulators Local 24 in Maryland said he did not vote for Trump, and guessed that few in the ballroom did either. But Cavey added, he believes 40 percent to 50 percent of rank-and-file members supported Trump.

Early in the address, a small cluster of attendees stood up to display signs that said, “Resist.” Others shouted at them to sit down, as security moved to escort the protesters out of the ballroom. In a departure from his campaign combativeness, Trump ignored them.

Karen Britts was the rare attendee to tell the press she voted for Trump. “I like that he wants to rebuild America,” said Britts, who came to the conference as a guest. Her friend Laura Stansbery of the Toledo, Ohio, Plumbers, said she was glad Trump “wants to support the U.S. workers. I hope he wants to support the union workers” more than nonunion labor.

UNLV Political Science Department Chairman John Tuman believes Trump’s opposition to NAFTA and his support for American jobs does “not necessarily” translate into support for unionized workers. “If you look at his business record, Trump has shown himself to be pragmatic” as he worked with unions in the hospitality sector.

Tuman doesn’t see the courtship lasting. The more Trump reaches out to union leaders, Tuman predicted, the more he risks a backlash from entrenched interests in the GOP.

Plumber Andy Johnson of Kansas City expressed the skepticism of many in the Hilton ballroom, when he summed up the event: “All he had to do was say the word union one time.”