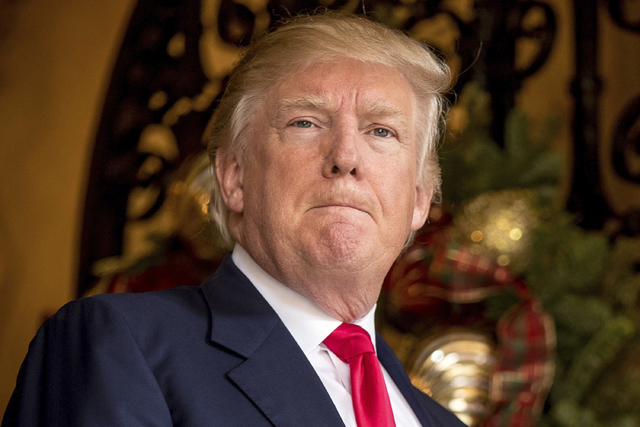 President-elect Donald Trump takes a question from a member of the media at Mar-a-Lago, in Palm Beach, Fla., Wednesday, Dec. 21, 2016. Trump on Thursday abruptly called for the United States to “greatly strengthen and expand its nuclear capability” until the rest of the world “comes to its senses” regarding nuclear weapons. Trump made the statement on Twitter and did not expand on either the actions he wants the U.S. to take or the issues he sees around the world. (Andrew Harnik/AP)

WASHINGTON — President-elect Donald Trump announced Tuesday that he has appointed Thomas P. Bossert, a veteran of the George W. Bush administration, as assistant to the president for homeland security and counterterrorism.

The position is a critical White House post within the National Security Council. In the past, the aide has often been the first person to brief the president when a terrorist attack takes place within the United States and served as a critical liaison between the administration and foreign governments in the fight against terrorism.

Bossert served in the White House previously as the deputy homeland security adviser to President Bush. In that capacity, he supported and advised the president on matters of homeland and national security, counterterrorism, cybersecurity and continuity of operations, Trump’s transition office said in announcing the pick.

During the presidential campaign, Trump made clear that cracking down on terrorism would be a priority of his administration.

“Tom brings enormous depth and breadth of knowledge and experience to protecting the homeland to our senior White House team,” Trump said in a statement. “He has a handle on the complexity of homeland security, counterterrorism, and cybersecurity challenges. He will be an invaluable asset to our Administration.”

In a statement, Bossert said he is looking forward to working with Flynn as well as ” maintaining a strong, deeply respectful relationship” with state and local officials and emergency responders involved in homeland security. Bossert also noted the emerging challenges posed by cybersecurity.

Since leaving the Bush administration, Bossert has run a homeland and national security consulting business and served as a senior cybersecurity Fellow at the U.S. Atlantic Council. He previously held other positions in federal government with the Federal Emergency Management Agency, the Small Business Administration, the Office of the Independent Counsel and the House of Representatives.