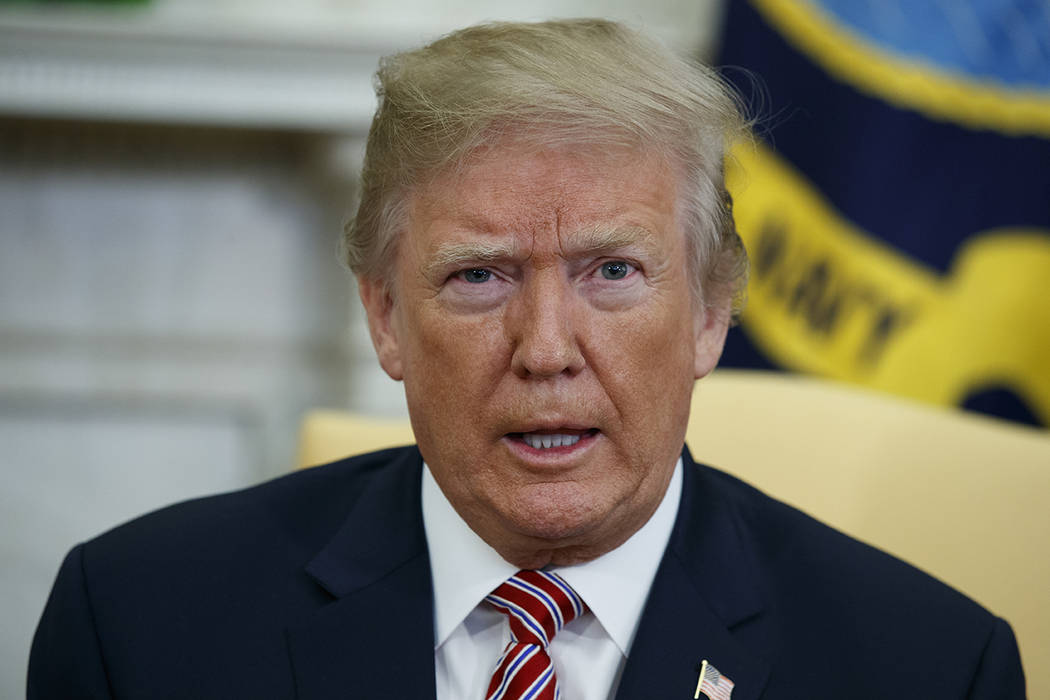 President Donald Trump speaks during a meeting with the Emir of Qatar Sheikh Tamim bin Hamad al-Thani in the Oval Office of the White House, Tuesday, April 10, 2018, in Washington. (AP Photo/Evan Vucci)

WASHINGTON — The FBI’s raids on President Donald Trump’s personal attorney on Monday drew denunciations from the president, who called the seizure of attorney-client documents “an attack on our country.”

“Attorney-client privilege is dead,” he tweeted following the sweep of the home, office and hotel room of lawyer Michael Cohen.

Victoria Toensing, a former federal prosecutor whom Trump had considered hiring for his defense team, called the raids “the weaponization of the criminal justice system” and decried the inappropriate use of tactics generally reserved for “terrorists, organized crime and drug dealers.”

In a piece written for The Hill, Harvard Law School professor emeritus Alan Dershowitz wrote that civil libertarians would be incensed if the FBI had raided the office of former Secretary of State Hillary Clinton’s lawyer during its investigation of her use of a home-brew server for thousands of government emails, many of which she deleted. But they are silent when Trump’s attorney is in the crosshairs, he noted.

Dershowitz, who reportedly was dining with the president Tuesday night, did not vote for Trump, he disclosed, but said he considers the raids “a serious mistake because these violations establish precedents that lie around like loaded guns capable of being aimed at other targets.”

“Having said that, Michael Cohen may be the least compelling person to raise the attorney-client privilege,” he said, noting that Cohen has frequently seemed to mix up his roles as friend, lawyer and business partner of Trump.

Federal prosecutors argue that the system has ample protections to prevent prosecutorial abuses. In Cohen’s case, a top Department of Justice official and the U.S. Attorney’s Office from the Southern District of New York had to sign off on the search warrant, they note. Most important, a judge had to review the evidence to see if there was probable cause for the search of an attorney’s documents.

There are additional safeguards after a seizure of potentially privileged documents, said one federal prosecutor, who spoke to the Review-Journal on condition of anonymity. An independent “filter” or “taint team” would then review documents to see which are protected by attorney-client privilege.

The review itself can be nuanced and subject to further legal challenges, according to the Politifact website. “While discussions about a client’s past crimes would typically be privileged, communications about a current or future crime involving a lawyer and client are not covered. There’s a similar exception for fraud, which more typically arises in civil rather than criminal contexts,” it said.

Turley sees a possible scenario where federal prosecutors might uncover evidence of a separate criminal matter that could be used against Cohen — and then be used to force the attorney to cooperate in the investigation of collusion between the Trump campaign and Russian operatives.

Under that scenario, Turley wrote in The Hill, “Cohen’s greatest danger to Trump may be not as a defendant, but as bait.”

But Toensing sees another possible motive in the special counsel’s apparent involvement in the raids on Cohen.

“I think Mueller’s goading Trump to fire him because he can’t find Russian collusion,” she said.

But if Trump chose that route, he likely would find himself reliving the 1973 “Saturday Night Massacre” when in order to fire special prosecutor Archibald Cox, President Richad Nixon was forced to accept the resignations of his attorney general and his deputy.

The maneuver did not end well for Nixon, who later resigned to avoid impeachment, and Sen. Chuck Grassley, R-Iowa, head of the Senate Judiciary Committee, told CNN Tuesday that it could lead to a similar outcome if Trump were to try it.

“I think it would be suicide for the president to fire him,” he said. “I think the less the president says about this whole thing, the better off he will be. And I think Mueller is a person of stature and respected and I respect him. Just let the thing go forward.”