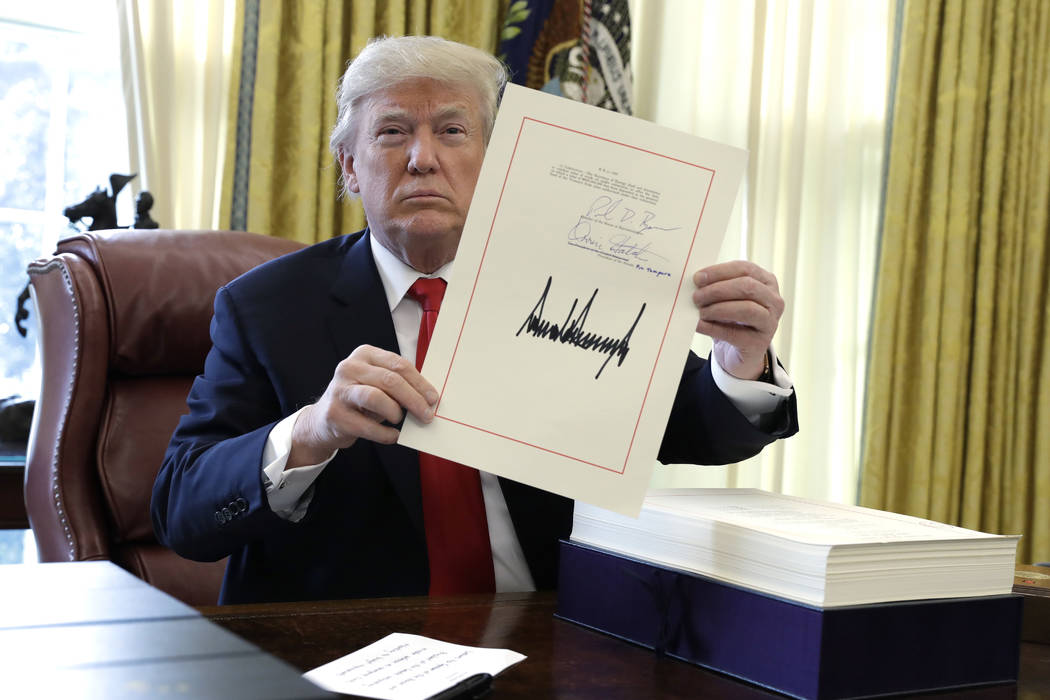 President Donald Trump displays the $1.5 trillion tax overhaul package he had just signed, Friday, Dec. 22, 2017, in the Oval Office of the White House in Washington. Trump touted the size of the tax cut, declaring to reporters in the Oval Office before he signed it Friday that &quot;the numbers will speak.&quot; (AP Photo/Evan Vucci) 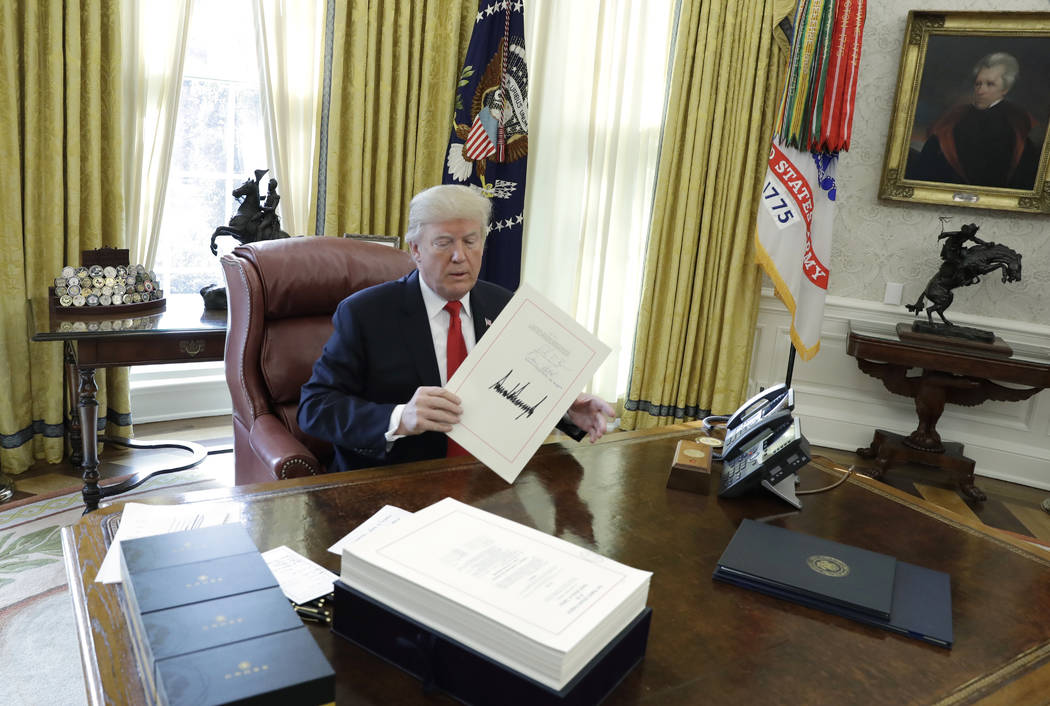 President Donald Trump displays the $1.5 trillion tax overhaul package he had just signed, Friday, Dec. 22, 2017, in the Oval Office of the White House in Washington. The bill provides generous tax cuts for corporations and the wealthiest Americans, plus smaller cuts for middle- and low-income families. (AP Photo/Evan Vucci) 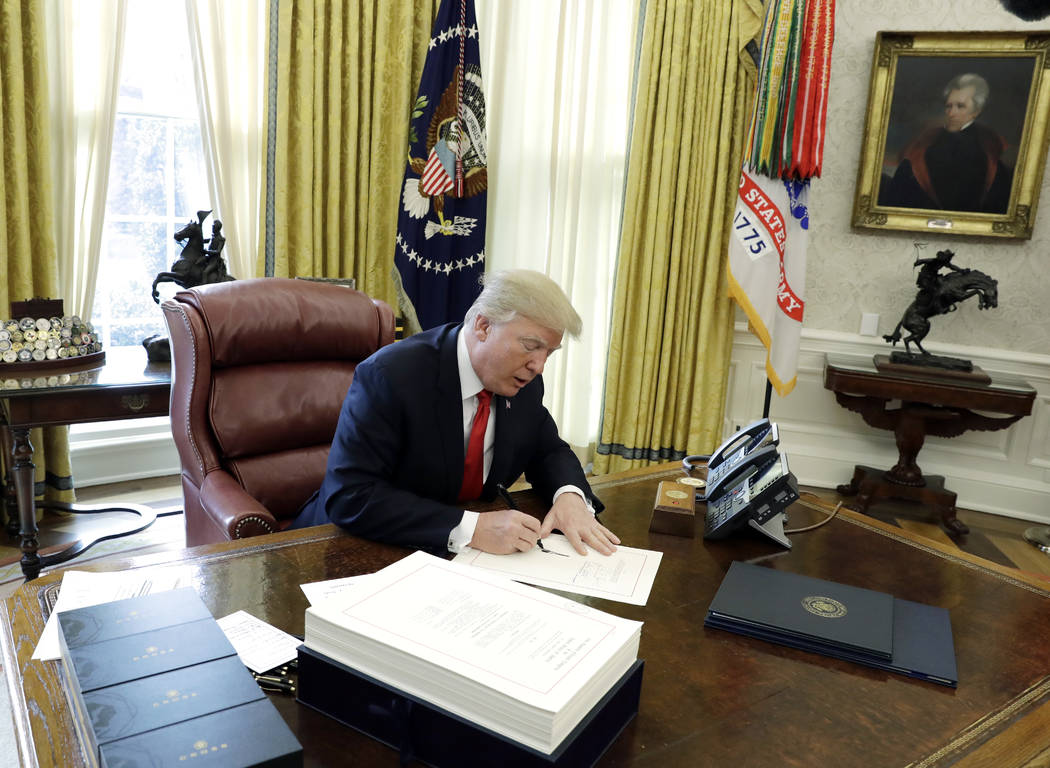 President Donald Trump signs into law a $1.5 trillion tax overhaul package, Friday, Dec. 22, 2017, in the Oval Office of the White House in Washington. Trump touted the size of the tax cut, declaring to reporters in the Oval Office before he signed it Friday that &quot;the numbers will speak.&quot; (AP Photo/Evan Vucci) 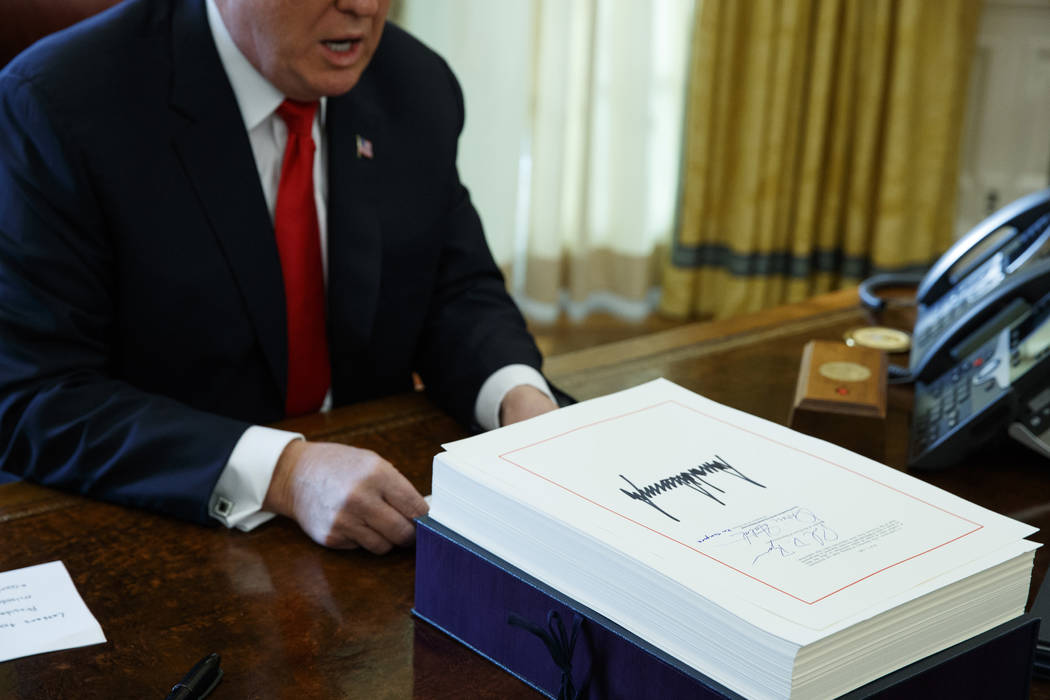 President Donald Trump speaks with reporters after signing the tax bill and continuing resolution to fund the government, in the Oval Office of the White House, Friday, Dec. 22, 2017, in Washington. (AP Photo/Evan Vucci)

The two pieces of legislation represent Trump’s most significant accomplishment with Congress since taking office in January, as well as a sign of what awaits when he returns from his Mar-a-Lago resort in Florida after the Christmas holiday.

The tax package, the largest such overhaul since the 1980s, slashes the corporate rate from 35 percent to 21 percent and temporarily reduces the tax burden for most individuals as well.

Democrats had opposed the bill as a giveaway to the wealthy that would add $1.5 trillion to the $20 trillion national debt during the next decade.

The spending bill extends federal funding through Jan. 19, largely at current levels. It does nothing to resolve broader disputes over immigration, healthcare and military spending.

Republicans also are divided over whether to follow up their sweeping overhaul of the U.S. tax code with a dramatic restructuring of federal benefit programs.

House Speaker Paul Ryan has said he would like to revamp welfare and health programs but Senate Republican Leader Mitch McConnell told National Public Radio on Monday that he was not interested in cutting those programs without Democratic support.