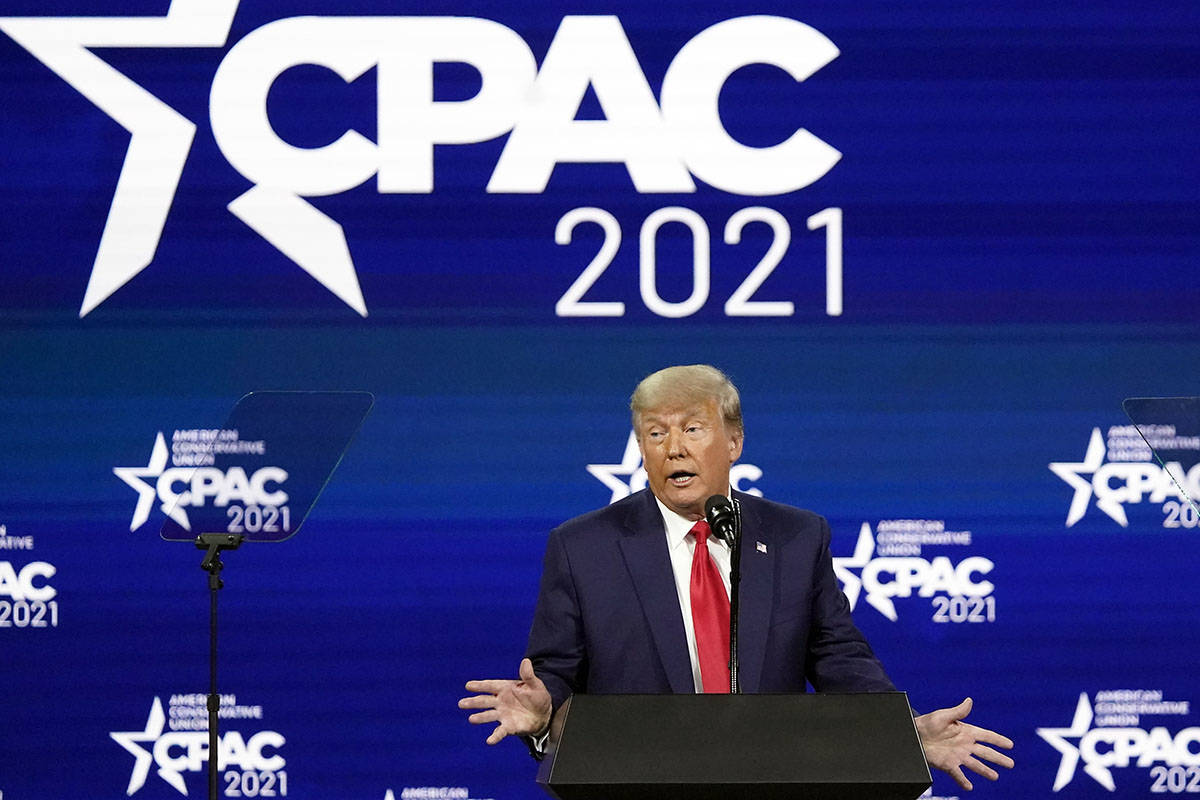 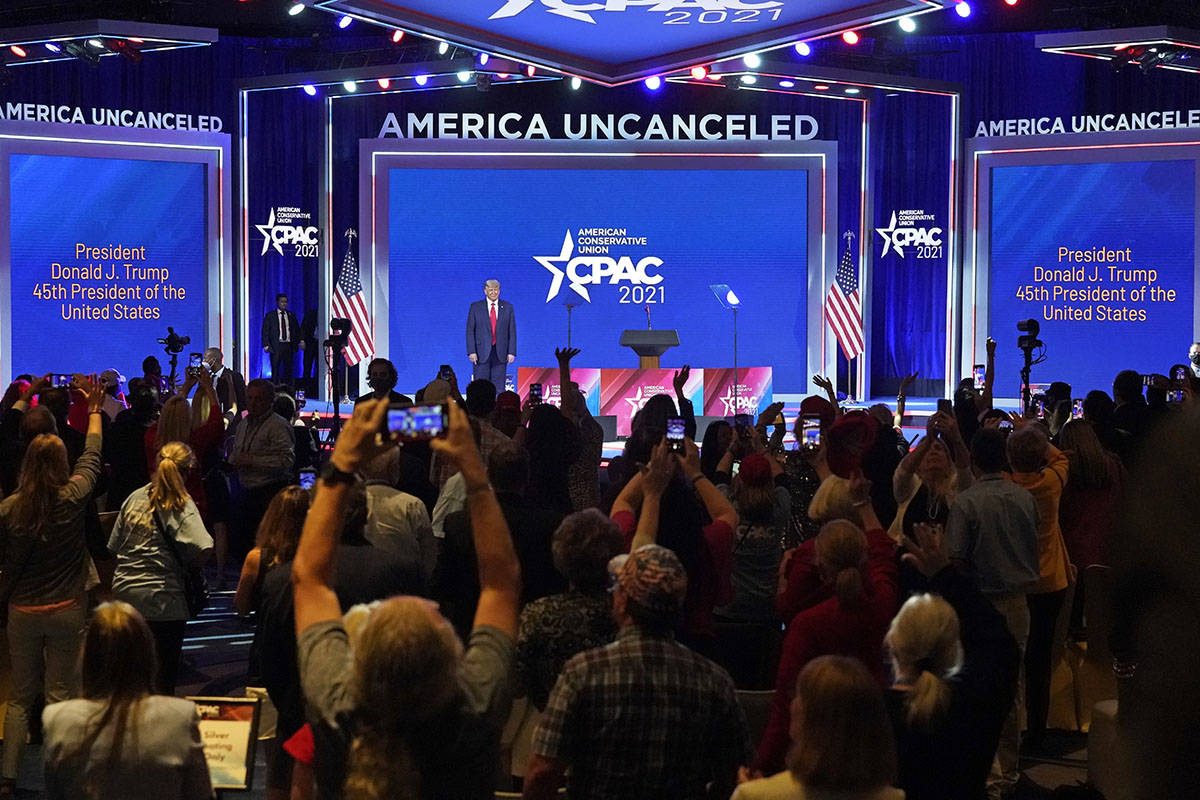 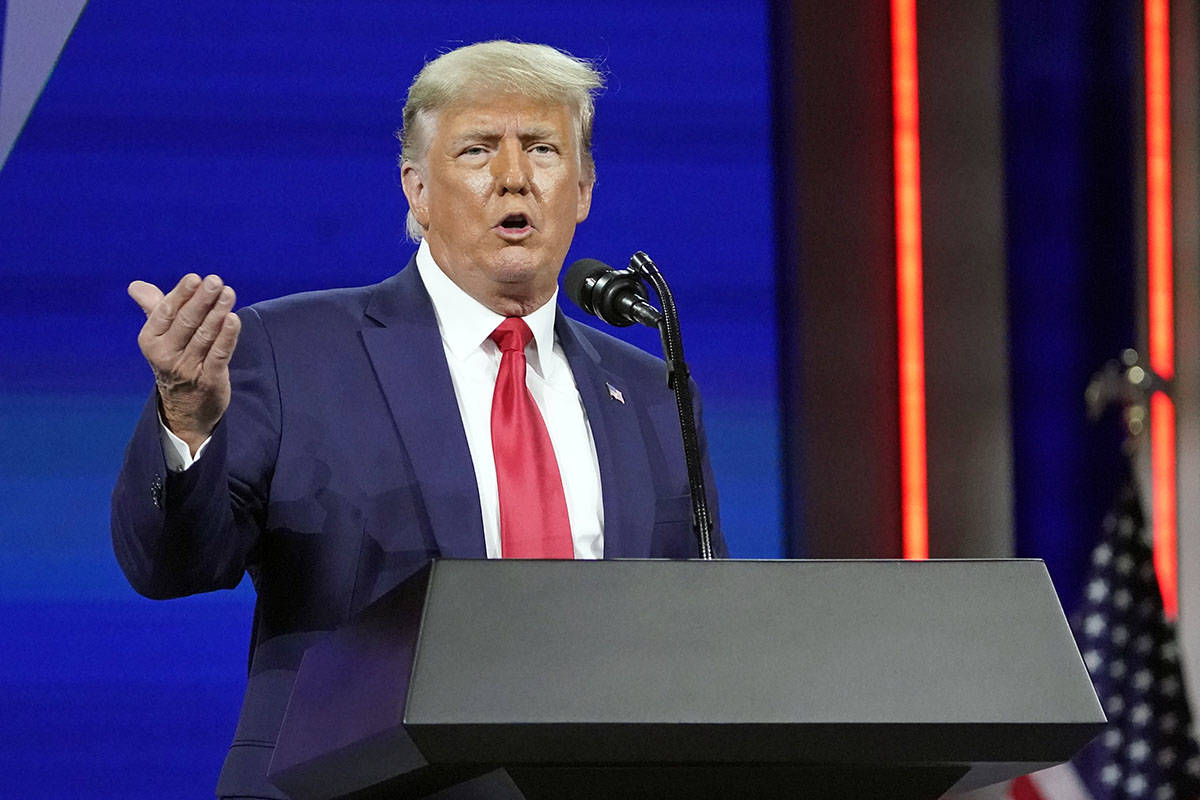 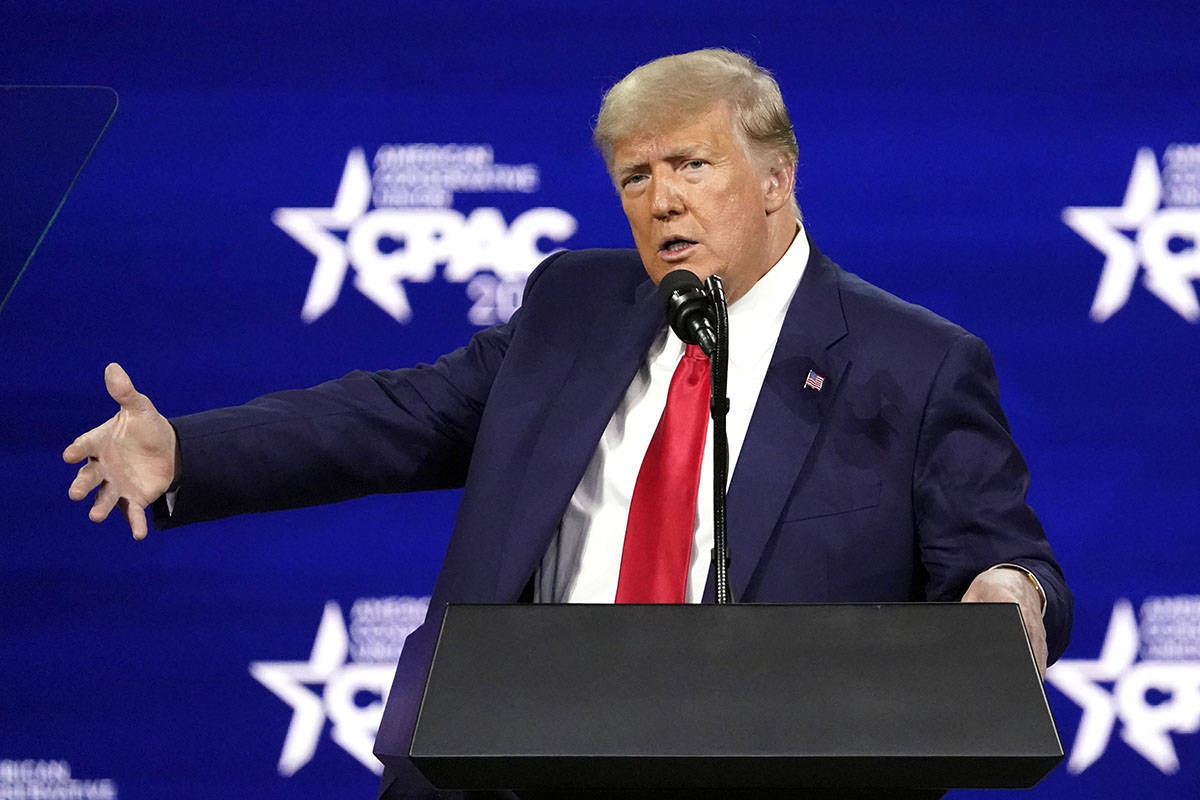 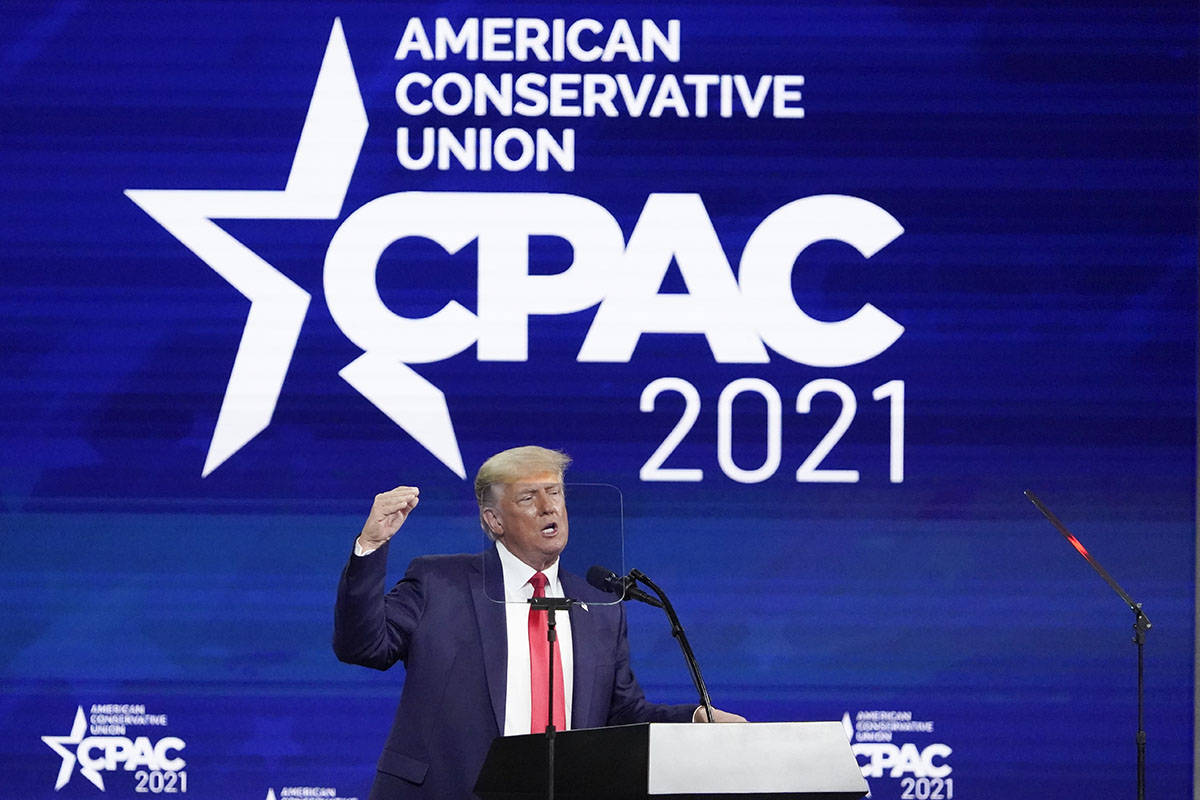 WASHINGTON — Former President Donald Trump teased that he may run for president in 2024, insisted that the Nov. 3 election was rigged and declared he would not start an alternative political party when he spoke to his most ardent supporters at the Conservative Political Action Conference, or CPAC, on Sunday.

“I may even decide to beat them for a third time,” Trump told the boisterous crowd, in an apparent but inaccurate assertion that he and not President Joe Biden was the real victor on Nov. 3.

The 90-minute address to the annual conservatives’ Woodstock was Trump’s first speech since he left Washington on Jan. 20.

“In true Trump fashion, he left open the question about whether he will run in 2024, but closed the door on forming a third party,” Republican strategist Alice Stewart told the Review-Journal. “In other words, he fed his base just the red meat they are hungry for.”

The event also handed Trump his first chance to vent against the group of Republicans who supported his second impeachment — without a filter, since Twitter permanently suspended his account after the Jan. 6 riot. And vent he did, as Trump named the 10 House members who voted to impeach him in January and the seven GOP Senators who voted to convict him in February.

Those who voted or spoke against him were dismissed as “establishment Republicans” and “political hacks” whom, he said, could “actually be successful” if they spent as much time attacking Democrats as they attack him.

Trump singled out Rep. Liz Cheney, R-Wyo., whom he predicted might lose re-election, as well as Utah Sen. Mitt Romney for additional scorn, which he also directed at Senate Minority Leader Mitch McConnell and the U.S. Supreme Court for not tilting the election in his favor.

In a departure with the traditional habit of former presidents to avoid the spotlight to let his successor take the reins from 1600 Pennsylvania Avenue, Trump ridiculed President Joe Biden’s mental acuity and hammered on his immigration policies, his decision to curb fracking and his decision to kill the Keystone pipeline.

Trump also wove together his criticisms of Biden’s handling of the U.S.-Mexico border with Biden’s support for coronavirus school closures.

The Biden administration, Trump said, “is actually bragging about the classroom education they’re providing to migrant children on the border, while at the same time millions of American children are having their futures destroyed by Joe Biden’s anti-science school closure. Think of it, we’re educating students on the border that our own people, children of citizens, citizens themselves are not getting the education that they deserve.”

Trump also took a walk down memory lane when he recalled his 2015 escalator ride in Trump Tower as he announced he was running for president. Notably, Trump accused Mexico of sending criminals to the United States. Trump parroted the rhetoric he used in 2015 when he told CPAC, “They’re not giving us their best and their finest.”

Dan Newman, a former adviser to Vice President Kamala Harris, told the Review-Journal: “Trump is Trump. In one sense, it’s extraordinary how little has changed. He’s the same racist who came down the elevator at Trump Tower and the same sore loser who incited the terrorists to storm the capitol.”

Trump took credit for the coronavirus vaccines which experts said could not be done in a year — in time, he noted, for Biden to receive his first dose before the inauguration.

On the issue of election integrity, Trump looked both backward and forward. Trump maintained that Democrats used the coronavirus to “as an excuse to change all the election rules without the approval of their state legislatures, making it all illegal” and shifting the outcome in Biden’s favor.

In Nevada, contrary to Trump’s rhetoric, Democratic state lawmakers in August passed Assembly Bill 4, signed into law by Gov. Steve Sisolak, which provided for a mostly mail-in election. Biden won Nevada by 2.4 points, the same margin by which Hillary Clinton won the state in 2016.

While the Pennsylvania Supreme Court overrode voting rules set by the legislature, the U.S. Supreme Court refused to get involved in the case — to Trump’s clear dissatisfaction. “The Supreme Court and other courts didn’t want to do anything about it,” Trump railed.

Trump also claimed, “In Pennsylvania they had hundreds of thousands of more votes than they had people voting.”

Politifact and the Philadelphia Inquirer rated that assertion false as it was based on a GOP lawmaker’s tweet that wrongly conflated general and primary election vote tallies.

Trump suggested a series of election reforms that included limiting voting to one day, allowing voting for mail only for cause, voter identification protocols, universal signature matching and citizenship verification.

A key feature of CPAC meetings is a straw poll of attendees to gauge their support for key Republicans. Nearly seven out of ten of those polled said they wanted to see Trump run in 2024.

In a field without Trump, 43 percent chose DeSantis, who used CPAC’s venue — Orlando because CPAC could not hold its annual meeting in National Harbor, Maryland, where such gatherings are banned — as a means to tout the Sunshine State’s coronavirus polices.

Addressing the crowd Friday, DeSantis boasted that Florida is “an oasis of freedom in a nation that’s suffering from the yoke of oppressive lockdowns,” when he addressed the socially distanced but not necessarily masked crowd.

South Dakota Gov. Kristi Noem, a strong Trump supporter, came in second with 11 percent of the vote in a Trump-less field. Donald Trump Jr. came in third place at 8 percent.

The annual conference has been a must-do venue for Republican presidential hopefuls since it first convened in 1973. 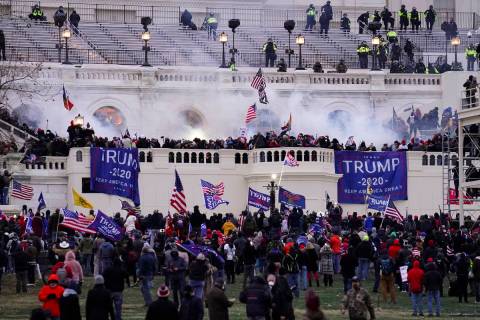 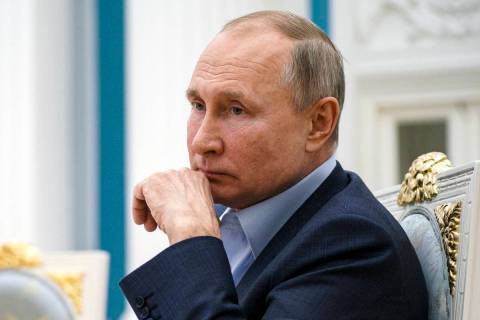 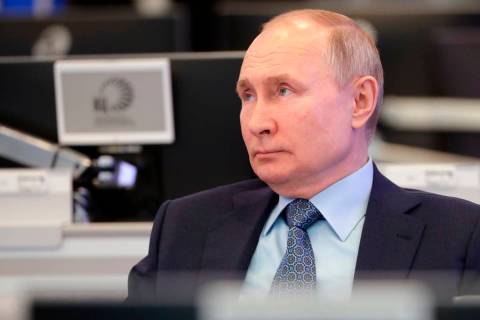