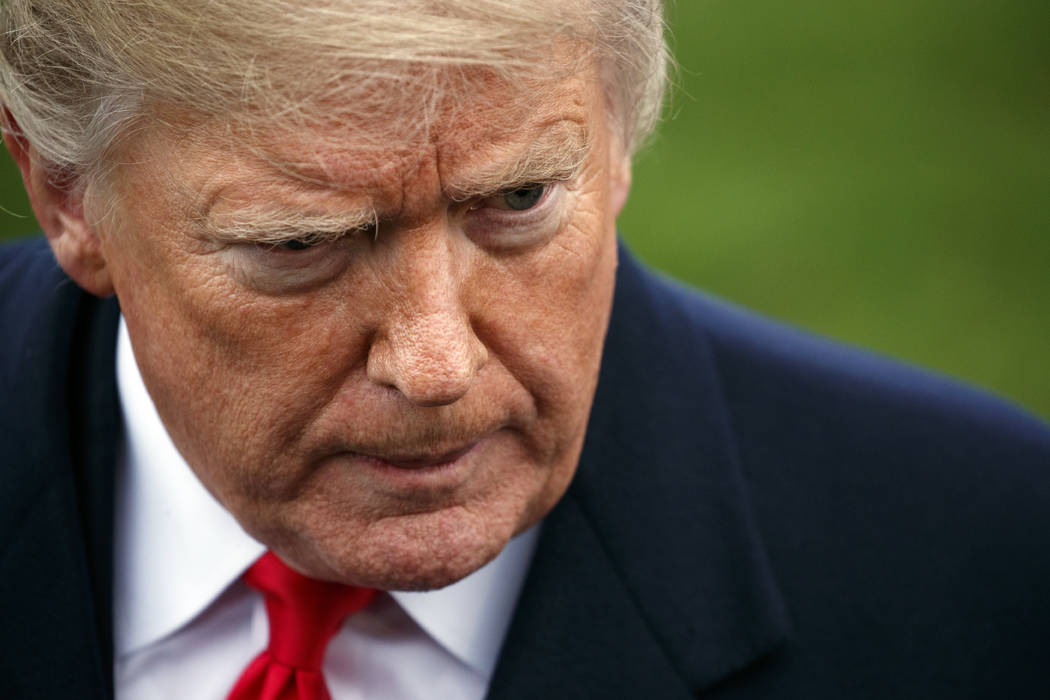 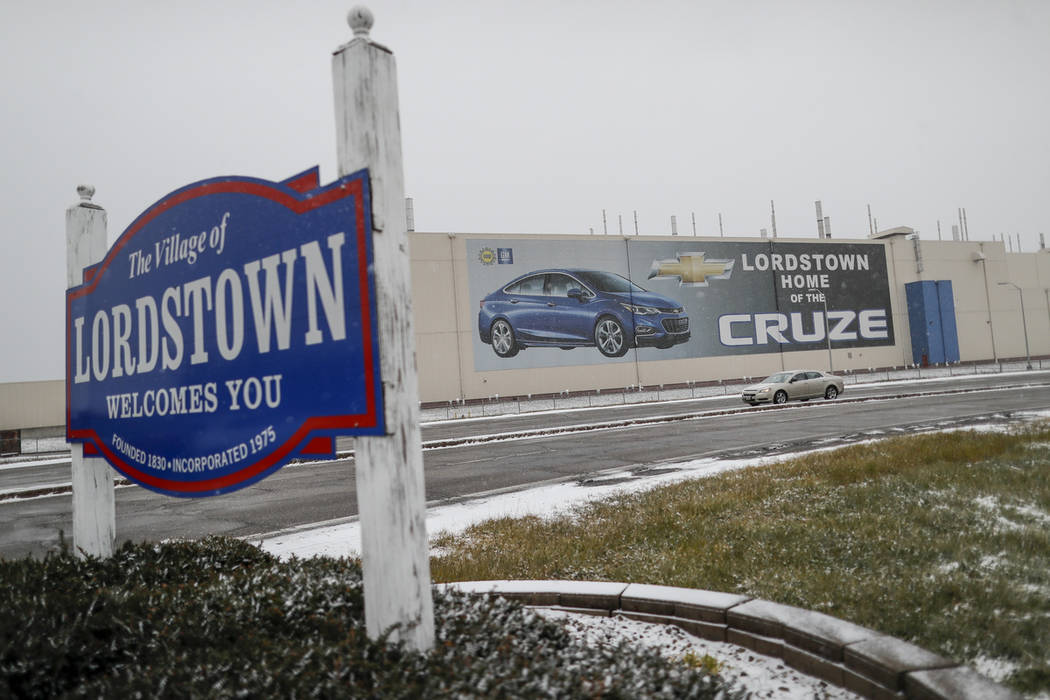 A banner depicting the Chevrolet Cruze model vehicle is displayed at the General Motors' Lordstown plant, Tuesday, Nov. 27, 2018, in Lordstown, Ohio. Even though unemployment is low, the economy is growing and U.S. auto sales are near historic highs, GM is cutting thousands of jobs in a major restructuring aimed at generating cash to spend on innovation. GM put five plants up for possible closure, including the plant in Lordstown. (AP Photo/John Minchillo) 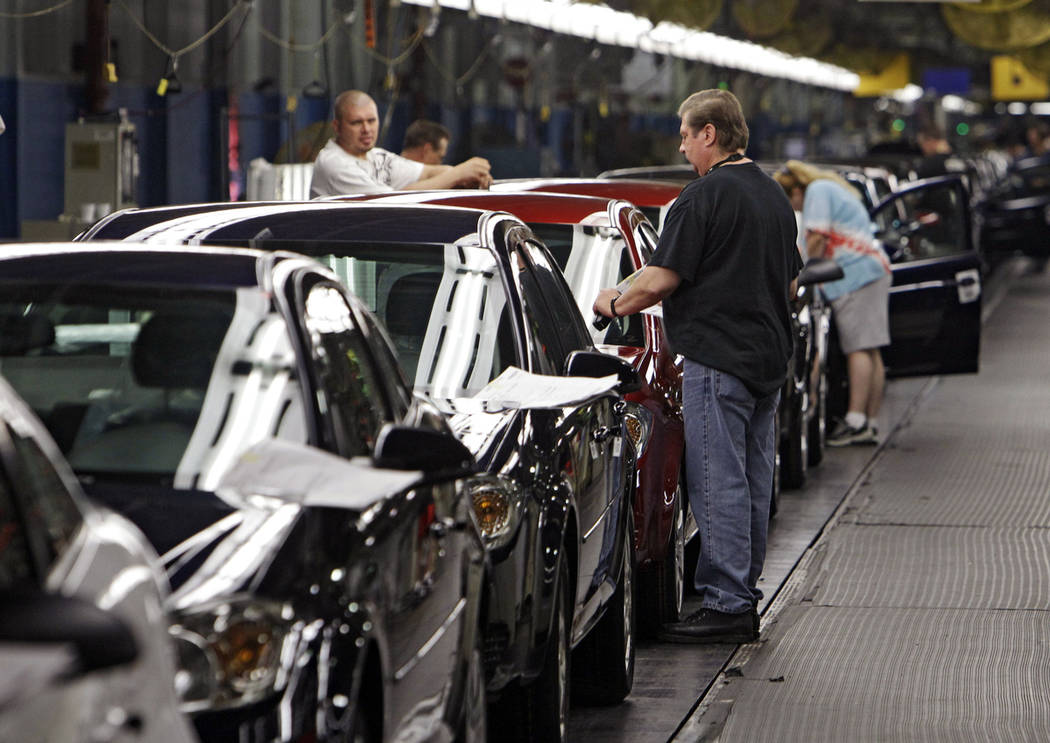 In this file photo, workers at General Motors' Lordstown Assembly plant in Lordstown, Ohio, put the final touches on Chevy Cobalts. One of the last industrial anchors in what was once the heart of manufacturing in Ohio is now on life support after General Motors announced Monday, Nov. 26, 2018, it will stop small-car production at its Lordstown assembly plant and consider closing it for good. (AP Photo/Mark Duncan, File) 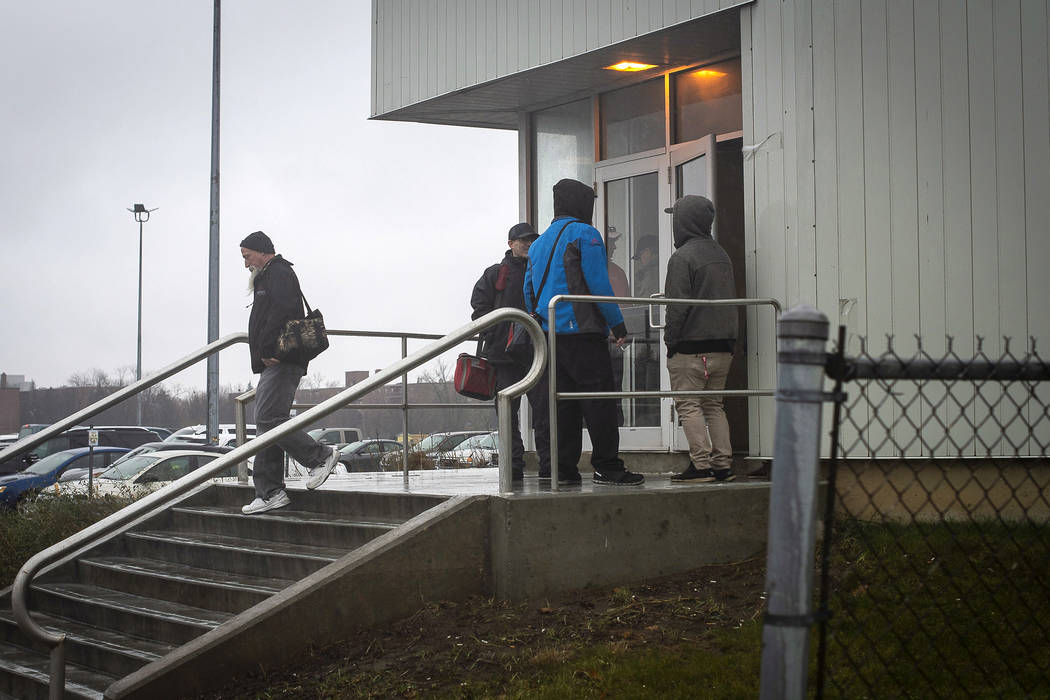 WASHINGTON — In the wake of GM’s announcement that it will lay off more than 14,000 workers, or 15 percent of its workforce, President Donald Trump lashed out Tuesday at the American automobile giant’s cars and threatened to pull its federal subsidies.

“The U.S. saved General Motors, and this is the THANKS we get!” Trump tweeted, referring to the $49.5 billion federal bailout of General Motors that saved the corporation in 2009.

Trump also tweeted that his administration is “looking at cutting all @GM subsidies, including for electric cars.”

….for electric cars. General Motors made a big China bet years ago when they built plants there (and in Mexico) – don’t think that bet is going to pay off. I am here to protect America’s Workers!

On the South Lawn Monday, Trump had hectored GM Chairman and CEO Mary Barra for announcing the closure of five North American plants, including a Detroit plant that produces its electric Volt and an Ohio plant that produces the Chevy Cruze, because Trump noted, GM made cars that were not “selling well.”

GM announced the layoffs and closures Monday as a move that would accelerate its modernization. “The actions we are taking today continue our transformation to be highly agile, resilient and profitable, while giving us the flexibility to invest in the future,” Barra said in a statement. “We recognize the need to stay in front of changing market conditions and customer preferences to position our company for long-term success.”

Kudlow also said the administration was looking at removing subsidies as it seemed GM “would rather build electric cars in China” than the United States.

University of Virginia law professor Saikrishna Prakash said it is not clear that an attempt to limit electric-car subsidies to GM buyers would pass muster in the federal court system. While lawmakers can choose which endeavors are worthy of federal subsidies, Prakash said, courts are not friendly to laws that carve out a “category of one” to benefit or punish a concern for reasons that are not facially neutral.

In June, the auto giant warned the Department of Commerce that Trump’s aluminum and steel tariffs could drive up its costs to consumers, undermine its ability to compete in the world market and lead to workforce layoffs.

“The correlation between a decline in vehicle sales in the United States and the negative impact on our workforce here, which, in turn threatens jobs in the supply base and surrounding communities, cannot be ignored,” GM told the government.

But Trump told reporters Monday that the GM layoffs “had nothing to do with tariffs. She (Barra) said the car was not selling.”

At a political rally in Mississippi that afternoon, Trump boasted that he had “found the magic wand” to produce disappearing manufacturing jobs in the United States.

Rep. Tim Ryan, R-Ohio, later told CNN that Trump’s comments were “insulting” to GM employees about to lose their jobs.

In a statement Tuesday, GM tried to appease the Trump administration while at the same time justifying the decisions it announced Monday. “We appreciate the actions this administration has taken on behalf of industry to improve the overall competitiveness of U.S. manufacturing,” the statement said.

Daniel J. Ikenson of the libertarian-leaning Cato Institute’s Stiefel Center for Trade Policy Studies told the Review-Journal that “All of us who were studying the aluminum tariffs said the downstream industries would be hurt, the automotive industry would be hurt.”

Ikenson described the tariffs and Trump’s jeremiad against GM as heavy-handed strong-arming meant to put the government at the helm of private businesses. “The president is a classic crony capitalist. He doesn’t believe in letting the market do its job,” Ikenson added.

Ikenson called Trump’s decision to call out GM for straying from his vision “the antithesis of market capitalism.”