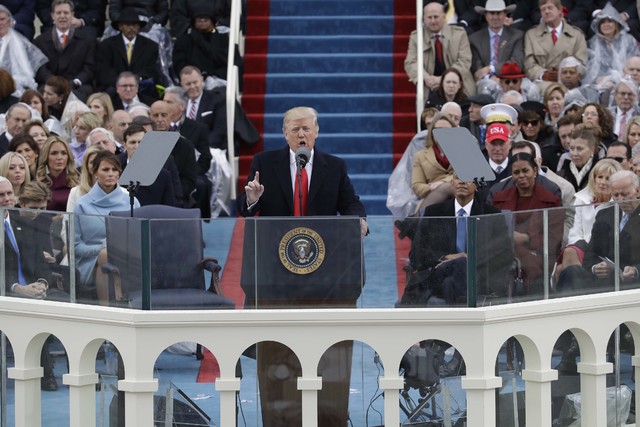 President Donald Trump delivers his inaugural address after being sworn in as the 45th president of the United States during the 58th Presidential Inauguration at the U.S. Capitol in Washington, Friday, Jan. 20, 2017. (Patrick Semansky/AP) 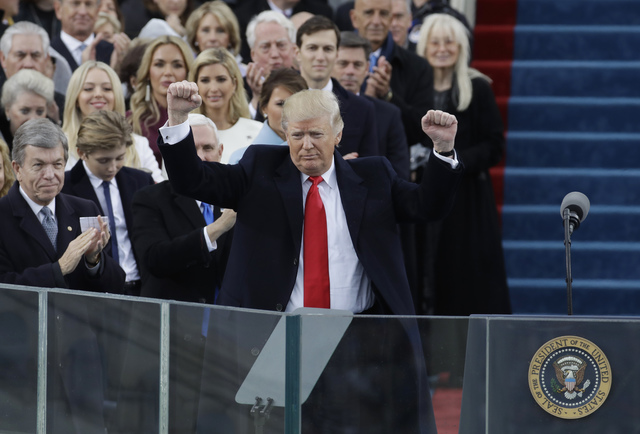 President Donald Trump pumps his fist after delivering his inaugural address after being sworn in as the 45th president of the United States during the 58th Presidential Inauguration at the U.S. Capitol in Washington, Friday, Jan. 20, 2017. (AP Photo/Patrick Semansky) 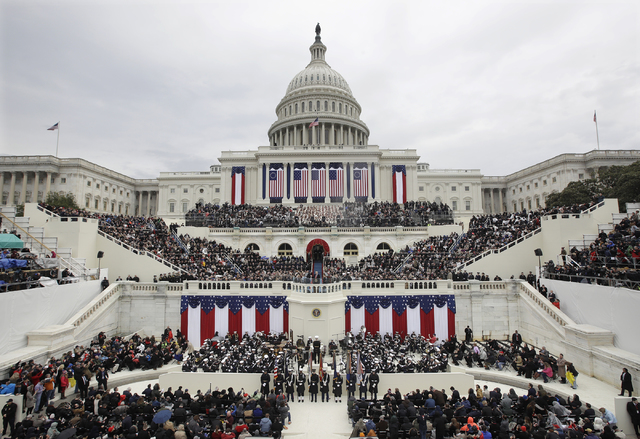 President Donald Trump delivers his inaugural address after being sworn in as the 45th president of the United States during the 58th Presidential Inauguration at the U.S. Capitol in Washington, Friday, Jan. 20, 2017. (AP Photo/Patrick Semansky) 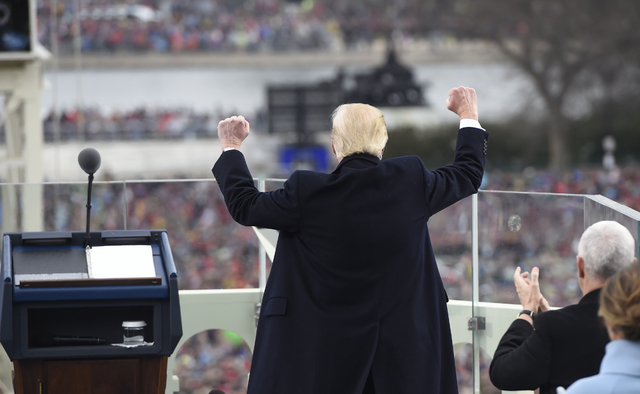 President Donald Trump celebrates after his speech during the presidential inauguration on Capitol Hill in Washington, Friday, Jan. 20, 2017. (Saul Loeb/Pool Photo via AP)

President Donald J. Trump declared war on Washington as he delivered his inaugural address Friday on the steps of America’s Capitol.

Flanked by members of Congress and former presidents, Trump declared that his administration would be dedicated to “transferring power from Washington, D.C., and giving it back to you, the American people.”

“For too long a small group in our nation’s capital has reaped the rewards of government while the people have borne the cost,” he said.

“That all changes,” Trump said, “starting right here, and right now, because this moment is your moment. It belongs to you.”

Unlike those around him, Trump pledged to represent families that are struggling as well as voters who feel they have been forgotten. “The forgotten men and women of this country will be forgotten no longer.”

As Trump began his remarks, a light rain began to fall on a day that was drier than weather forecasters had predicted. By the end of his short address — it was over in 15 minutes — the rain had ended.

The speech was reminiscent of the stump speeches Trump made throughout the long campaign.

“I didn’t expect a lot of poetry or high-tone prose or super-eloquence. What he gave us was pretty much a meat-and-potatoes Donald Trump speech,” former Reagan speechwriter Ken Khachigian observed.

Thursday, now Press Secretary Sean Spicer told reporters that the speech would be “a very personal and sincere statement about (Trump’s) vision for the country.” It would be “less of an agenda and more of a philosophical document.”

In a departure from Trump’s unscripted and free-wheeling talks at rallies, the new president spoke little about himself and his campaign victory. Instead, Trump used the ceremony to return to the campaign issues that he credits for his victory — protecting American borders and protecting American jobs. “We will follow two simple rules: Buy American and hire American.”

“I had predicted that he would lash out at protesters,” communications specialist and speech coach Ruth Sherman confessed. “He didn’t do that, but he lashed out at everybody else.” In challenging Washington from the Capital steps, Sherman said, Trump basically was proclaiming that “everybody on that stage was a loser.”

Sherman also had harsh words for Democratic Senate Leader Chuck Schumer of New York, who addressed the crowd before Trump was sworn in. Schumer, she said, did not give “a good speech. To me it was a lecture.” And: “It was bad form, honestly.”

Sherman said that Trump did a solid job talking to his supporters, that is, “people who are feeling left behind.” She believes that Trump calling Washington on its self-serving ways resonated with voters because “there’s some truth to that and truth is a powerful thing.”

Still, Sherman said she would give Trump a C- because he failed to appeal to Americans who did not vote for him. “It was a significant missed opportunity for the man who is our leader. He did not inspire. He didn’t motivate.” After the rancor of the election, Sherman added, Trump had an “overarching responsibility” to reach beyond his base.

National Republican Committeewoman Harmeet Dhillon, a San Francisco attorney who came to Washington to watch Trump take the oath of office, was impressed because Trump “didn’t focus on politics at all in the speech.”

Yes, there was an “us versus them” theme to the speech, Dhillon observed, but it wasn’t Republican versus Democrat, it was about us “the people” with an “outsider” champion versus them, the political class that is product of a “corrupt system.”

“He didn’t use the R word,” Dhillon noted, and “that doesn’t bother me as a Republican.”