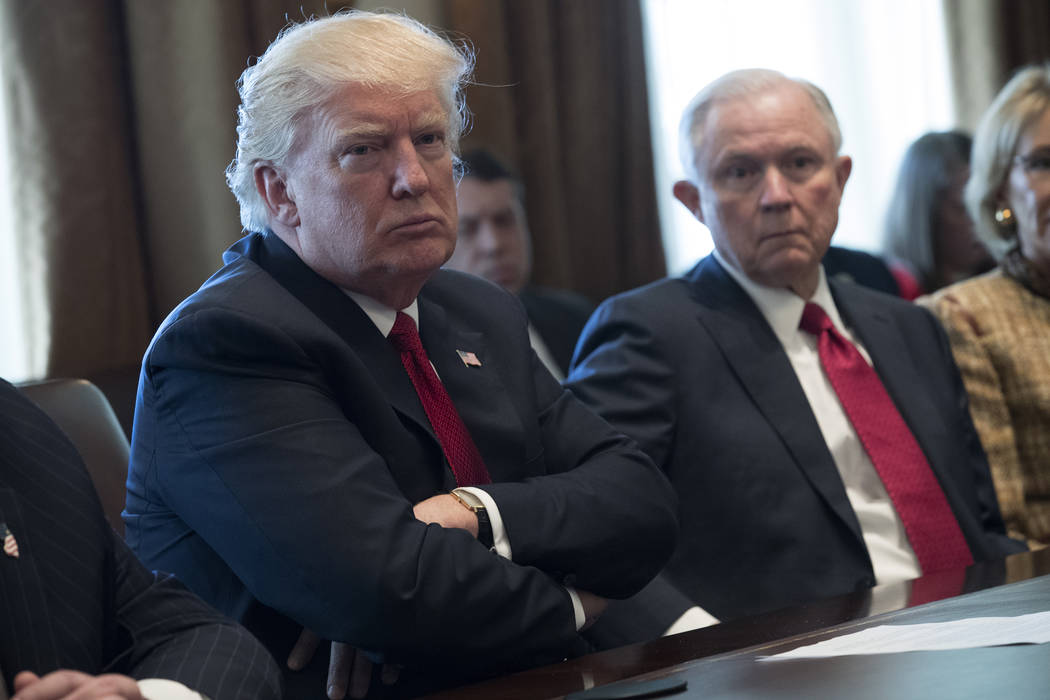 President Donald J. Trump, with Attorney General Jeff Sessions, delivers remarks during an opioid and drug abuse listening session at the White House in Washington in March. (Shawn Thew/Pool via CNP and AP)

Attorney General Jeff Sessions is not the first man who would come to mind as an exemplar of a unifying political figure — yet by just being himself, the former Alabama senator inadvertently managed to become perhaps the most sympathetic man in Washington.

For one thing, Sessions shares many unpopular (in Washington) positions with President Donald Trump. Both men are ardent foes of sanctuary cities and staunch proponents for robust immigration law enforcement. Sessions also has been a fierce warrior in the war on drugs. In his short time in office, he has pushed for maximum sentences under the federal mandatory minimum system, and he moved to reinstate civil asset forfeiture rules eased by President Barack Obama.

The first senator to endorse Trump in the 2016 GOP primary, Sessions never tried to water down Trump’s campaign positions on immigration or other issues. As a result, though he served in the Senate for 20 years, Sessions won confirmation as attorney general with the support of only one Democrat, Joe Manchin of West Virginia — which is proof that Sessions is not new to paying a price for his deeply held beliefs.

Sessions probably has pushed the Trump agenda further than any other Cabinet member — and yet Trump has spent more than a week telling anyone who would listen or read his tweets about how deeply disappointed he is with his top Justice Department official.

As Trump son Don Jr. and son-in-law Jared Kushner have been called to testify at closed congressional hearings investigating Russian attempts to interfere in the 2016 election, the president has become increasingly agitated at Session’s decision to recuse himself from the Department of Justice’s probe. Trump’s response has been to humiliate Sessions by calling his attorney general “beleaguered” and “weak” on Twitter and giving voice to his disappointment in the Rose Garden and to the New York Times.

Some believe Trump is trying to get Sessions to quit — perhaps so that he can name a new attorney general willing to fire special counsel Robert Mueller, the man in charge of the Russia investigation.

Senate Judiciary Committee Chairman Chuck Grassley, R-Iowa, was sufficiently concerned to tweet that his committee is too busy for the rest of 2017 to consider confirming a second attorney general.

Thing is, one former Sessions staffer said, “The attorney general is not going to quit.” Sessions himself told Fox News’ Tucker Carlson he finds Trump’s language “kind of hurtful,” but he will stay on the job unless the president asks him to go.

Which leads to the next question: Would Trump fire Sessions? Sen. Lindsey Graham, R-S.C., was sufficiently concerned to send out this warning Thursday: “If Jeff Sessions is fired, there will be holy hell to pay.”

The right has given Trump the benefit of the doubt — but the president’s shabby treatment of Sessions has Trump supporters running out of excuses.

“Jeff Sessions was out front for Trump before any member of the U.S. Senate, and he was there before anyone thought he had a chance of winning,” observed Dan Lungren, who served as California attorney general while Sessions was the Alabama AG. “I would never do that,” Lungren said. “I’ve never seen it before.”

Actually, the White House press corps saw this before.

During Trump’s first trip abroad as president, he allowed several staffers to meet Pope Francis, but not then-press secretary Sean Spicer, a devout Catholic. Spicer had been a Trump loyalist to a fault — but he later quit when Trump named New York financier Anthony Scaramucci to serve as his communications director. Prediction: When Scaramucci is gone, few will say he was loyal to a fault.

Republicans are concerned that Trump will go too far — by firing Mueller or getting someone in Justice to do it for him. Before such a reckless act can happen, GOP politicians have a different problem. Trump’s brand of gratuitous humiliation played against a faithful supporter who helped him get elected is just plain ugly to watch.