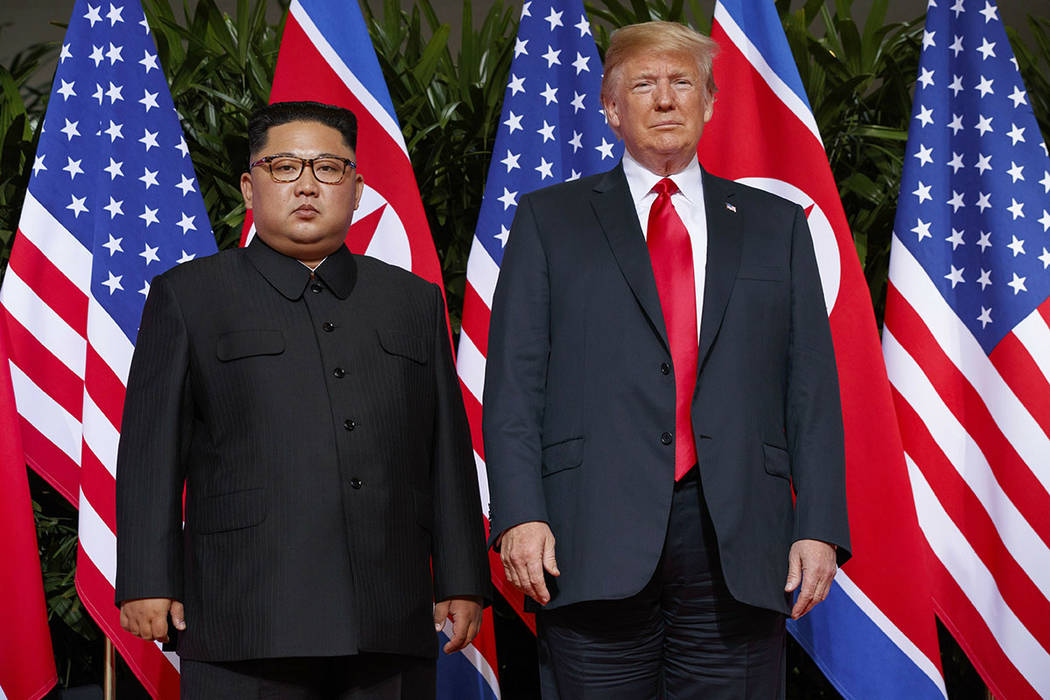 WASHINGTON — The White House tried Thursday to tamp down expectations ahead of the second summit between President Donald Trump and North Korean leader Kim Jong Un next week in Hanoi, Vietnam.

“I don’t know if North Korea has made the choice yet to denuclearize, but the reason we’re engaged in this is because we believe there’s a possibility that North Korea can make the choice to fully denuclearize,” a senior administration official told reporters during a conference call Thursday morning.

Ahead of the summit on Wednesday and Thursday, the conservative Heritage Foundation released a backgrounder that cited three “major mistakes” by the Trump administration around the first summit, held last June in Singapore: accepting a vague summit statement on denuclearization; unilaterally canceling U.S.-South Korean military exercises without reciprocal North Korean action; and “exuberantly praising” Kim despite his many human rights violations.

Senior research fellow on Asian studies Bruce Klingner called Trump’s decision to cancel allied military exercises in South Korea was “the gift that keeps on giving for North Korea.” Klingner also argued that the Kim regime wants to deal directly with Trump, whom it believes is more likely to deliver unilateral concessions.

Looking ahead, Klingner urged Trump to be prepared to walk away and sign only an end-of-summit agreement that includes a North Korean commitment to denuclearization and requires Pyongyang to allow international inspections that can verify compliance.

During Thursday’s conference call, the senior administration official told reporters that the two-day Hanoi summit will be similar in format to the one-day meeting at Singapore’s Sentosa island.

That June summit began with an extended grip-and-grin for the international press, after which Trump and Kim met with each other and only translators for nearly an hour. That tete-a-tete was followed by an expanded bilateral meeting that included Secretary of State Mike Pompeo and national security adviser John Bolton.

After the June summit, Trump said that he and Kim Jong Un had developed a “special bond.” Kim said “the world will see major change.”

The Trump White House has a list of improvements that followed the first meeting between a U.S. and North Korean leader. Vice President Mike Pence rattled off the list in Munich over the weekend: “No more nuclear tests. No more missiles being fired. Our hostages are home.” And North Korea has returned the remains of 55 deceased U.S. service members.

Many in the foreign policy world, however, were underwhelmed with the results.

“There has to be a much more careful and realistic portrayal of where we’re at and what we’re doing and why we’re doing it,” Jenny Town, a Korean specialist at the Stimson Center, told the Review-Journal.

And Town thinks the Singapore summit was a plus for the United States. “As much as people criticize the last year and how little progress there has been,” Town said, “you know, this is a negotiation. The Singapore summit set a very broad agenda.”

Foreign policy watchers paid keen attention to remarks delivered Jan. 31 by special envoy Stephen Biegun at Stanford University in search of signals for what could happen in Hanoi.

Biegun admitted that there still was no agreement between the DPRK and Washington on the definition of denuclearizing North Korea. “Our view is that it entails the elimination of the totality of the weapons of mass destruction programs in North Korea,” he added.

But the Singapore statement calls for denuclearization of the Korean peninsula — a nod to the DPRK’s push to get U.S. troops out of South Korea.

Asked if the Trump administration would consider pulling U.S. troops out of South Korea, Biegun told the Stanford crowd, “So we are not involved in any diplomatic discussion, full stop, that would suggest this trade-off. It has never been discussed.”

Foreign policy hawks expect the Trump administration to deliver specifics so the international community can measure North Korean compliance. Town sees indications that the next deal will deliver international inspections.

Another challenge will be how the administration sells any agreement reached with the DPRK. Town sees an administration that may have done a better job reaching out to Pyongyang than to Capitol Hill.

Even a great package “may not be enough to win over the skeptics” if the White House can’t bring Congress on board, Town said.

“You can be positively positive in your diplomacy and in praising progress when it’s achieved, but you don’t necessarily have to extol the virtues of your counterpart,” said Klingner.