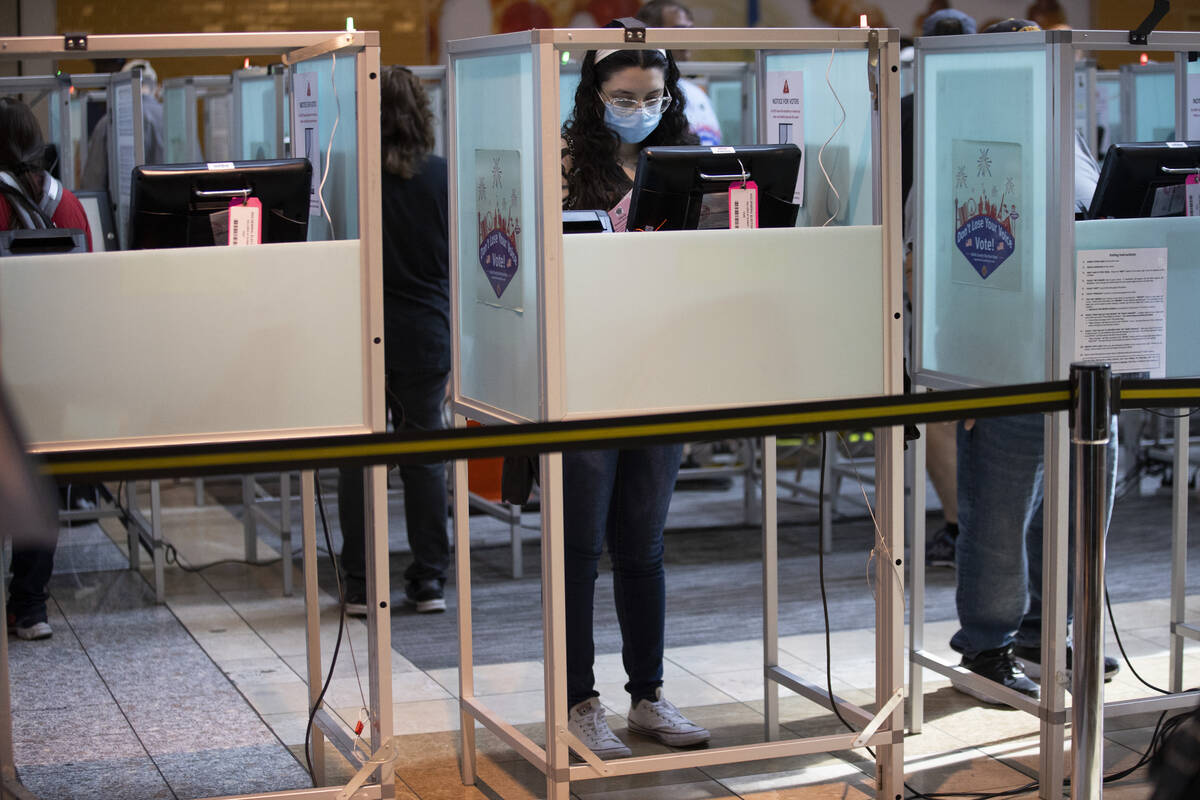 Amira Ezzarhri, 18, casts her vote at the polling place inside of the Galleria at Sunset shopping mall in Henderson, Saturday, Oct. 22, 2022. (Erik Verduzco/Las Vegas Review-Journal)

But which ones will accept the results — especially if they lose?

Holding election deniers accountable was a top issue for the Las Vegas Review-Journal readers, who recently submitted issues they want candidates to talk about before the Nov. 8 election.

“What’s at stake here, when it comes to some of these candidates that are running is the fact that they could potentially have the power to overturn any election in the future. And I think that’s fundamentally dangerous because it is undermining our democracy,” Troye said.

Troye, a native of Reno, has been outspoken against former President Donald Trump and his refusal to accept the 2020 election results, and she has focused on condemning election deniers across the country.

Denying the results of an election comes out of the “anti-democracy playbook,” Troye said. First, there’s an attempt to change the rules, undermine the election process and make it harder for people to vote. Then, you put like-minded people in charge of overseeing elections who behave without integrity, she said.

Troye pointed out that denying elections has directly led to increased violence and threats on election workers, using the example of the Washoe County registrar who quit after receiving threats following the 2020 election.

Claims of a stolen election have been unsubstantiated — with dozens of judges across the country dismissing lawsuits for a lack of evidence, with clerks and secretaries of state affirming the security of the process and with attorneys general investigating the claims and finding no widespread election fraud.

“All of these people that are running know the truth. … They know that they’re running on this sort of an extreme platform because they think that that is where their voting bloc is,” Troye said.

But since January 2021, more Americans lack confidence that the results of U.S. elections reflect “the will of the people,” according to a July 2022 CNN poll conducted by SSRS, that found 48 percent of Americans think it is at least somewhat likely that in the next few years, some elected officials will successfully overturn the results of an election because their party lost.

In order to strengthen democracy, there needs to be a “reaffirmation of the basic rules of political civility and rule of law,” said G. John Ikenberry, a professor of politics and international affairs at Princeton University, during a democracy vs. autocracy panel at the International Women’s Forum’s 2022 World Leadership Conference on Thursday at Encore.

“American political party leaders in both parties should swear in advance that they’re going to abide by the elections and take off the table this question of, ‘well if they lose will they accept their loss?’” Ikenberry said.

A couple of candidates running for election Nov. 8 have said the 2020 election was stolen, or at least promoted the idea but have since backtracked.

Republican secretary of state candidate Jim Marchant has been a prominent election denier since 2020, when he lost his bid for Nevada’s 4th Congressional District against Democratic Rep. Steven Horsford, claiming that, like Trump, he was also a “victim of election fraud.” In 2020 he stood alongside the six Nevada Republicans who signed fake electoral certificates claiming Trump won Nevada, although he lost to Biden by about 30,000 votes.

Marchant’s campaign did not return calls seeking to learn whether or not he would accept the election results if he loses, and what actions he would take if he did not accept the results.

His Democratic opponent, Cisco Aguilar, said in an interview with the Review-Journal that if he loses, he will “absolutely” and “unequivocally” accept the results.

“I have great faith in our secretary of state. She’s done a great job and will continue to do a great job,” Aguilar said. (Term-limited Secretary of State Barbara Cegavske has certified the 2020 election was properly conducted, and has received heavy criticism as a result. She was even censured by the Nevada Republican Party for failing to give credence to the stolen-election claims.)

Republican U.S. Senate hopeful and former Attorney General Adam Laxalt was the face of Trump lawsuits in Nevada challenging the election results, but he has subsequently acknowledged that Biden is the legitimate president.

When asked if Laxalt would accept the election results if he loses, Laxalt’s campaign spokesperson Brian Freimuth said the campaign has answered the question before, pointing the Review-Journal to a two-sentence statement in a Reno Gazette Journal article Oct. 21 where Freimuth said that Laxalt acknowledges that Biden is the president and that he’ll accept the results of this election. But he declined to provide the same statement to the Review-Journal.

The staff of Democratic incumbent U.S. Sen. Catherine Cortez Masto, asked the same question, said she will accept the results.

In the governor’s race, both Democratic Gov. Steve Sisolak and Republican Clark County Sheriff Joe Lombardo say they will accept the results of the election.

Republicans say they are not exclusively to blame when it comes to challenging election results. They point to former Vice President Al Gore’s rescinded concession during the 2000 election in Florida, where a recount was ultimately halted by the U.S. Supreme Court and then Texas Gov. George W. Bush declared the winner. They also point to comments made by ex-Secretary of State Hillary Clinton following her 2016 loss of the Electoral College to Trump. In 2019, Clinton said Trump was an “illegitimate president” who used tactics from voter suppression to voter purging to email hacking and false stories in the media, according to the Washington Post.

In both cases, however, Gore and Clinton ultimately conceded the elections to their respective Republican opponents.

In some cases, candidates actually do have reasonable cause to think they lost unfairly. Take, for example, Republican Las Vegas Councilman Stavros Anthony, who lost his county commission race in 2020 by 10 votes against Democrat Ross Miller. Anthony filed for a recount, which expanded Miller’s lead. Anthony then took the issue to court, where the District Court ruled against his petition to launch a new election. The state Supreme Court affirmed that ruling.

David Damore, professor of political science at UNLV, has not heard of any result changing after a candidate challenged the results.

“When you do those recounts you’re moving around maybe a handful of votes,” Damore said.

After 2020, there was a rise in rhetoric about stolen elections, but Republicans could not provide proof in court, Damore said.

“We saw a ton of it across the country, and they all lost. That’s the difference between this sort of rhetoric and the reality,” Damore said.

Many Republican candidates have not jumped into the election denialism, but have instead said they support measures to make elections more secure.

Lombardo, for instance, wants to introduce to legislation requiring an ID to vote, end the practice of sending mail ballots to every active registered voter, create a bipartisan panel to oversee Nevada’s elections and eliminate ballot harvesting, said his spokesperson Elizabeth Ray.

“Sheriff Lombardo is confident in Nevada’s elections system, but as governor, he will work to introduce an election integrity reform package to help restore Nevada voters’ confidence and trust in our elections system,” Ray said in a statement.

Ballot harvesting is the practice of collecting and turning in ballots that are not your own or your close relatives’.

Troye said it is important to encourage and make elections safe, but it is also important to explain why it is necessary to take those measures.

“I think you need to do it, though in a way where you can prove that there’s actually a need for the change. And you can point to factual evidence that requires that change,” Troye said.

Republican candidates who have not delved into election denialism have had to walk a fine line when campaigning with Republicans who have, such as former Republican President Donald Trump.

“When you do that, you are to a certain extent emboldening and you’re empowering that movement, whether you want to be a part of it or not,” Troye said.

“I think we need to remember that not all Republicans are bad. …The voters are responding to what they’ve been told by leaders, by leaders who have lied to them. And so I am always very cognizant of that, that I don’t think we should be attacking other Americans over each other. Because I think that is what continues to drive our country apart,” Troye said.