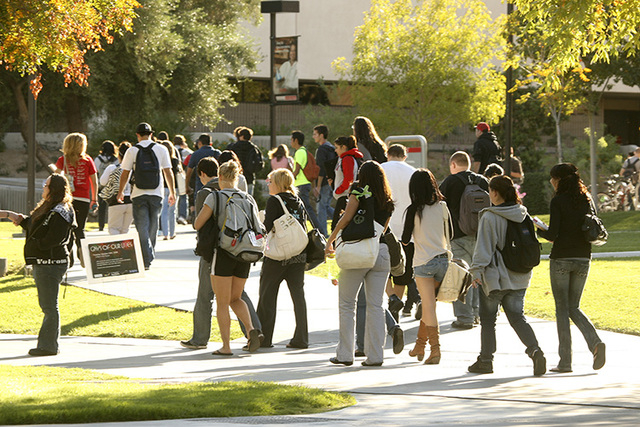 The state’s public college system continues to ban pot out of fear of losing federal funding even as Nevada is moving toward opening its first medical marijuana dispensaries early next year.

The Board of Regents on Thursday gave initial approval to an amendment to include medical marijuana to the long-standing policy banning controlled substances on all campuses and system facilities. The policy update includes possession, use, cultivation, manufacturing and delivery.

Marijuana remains an illegal controlled substance under federal law, and university system officials are concerned that allowing any marijuana use would jeopardize nearly $500 million in annual federal funding, including the nearly $370 million in student financial aid.

The policy clarification and code amendment was approved 12-1 at the regents’ regular meeting in Reno. It will go before them again in December for final approval.

The vote comes nearly a week after the University of Nevada, Las Vegas issued a policy clarification stating the university will continue to enforce its policies regarding controlled substances to include medical marijuana. Disciplinary action would include expulsion from school for students or termination of employment for faculty or staff, and possible criminal action.

Regent Allison Stephens said if the Nevada System of Higher Education was to allow participation in medical marijuana, it would put at risk federal funding that is critical for the students and institutions.

“This has nothing to do with whether we approve of medical marijuana or not, or appreciate this as a new economic driver,” Stephens said. “It has everything to do with the fact that there are multiple federal laws that prohibit this.”

Nielsen said she reviewed the policy with “all sectors” of the higher education system, including student governments.

“I have not received any objections within (the Nevada System of Higher Education),” she said. “It is broadly supported within our institutions and our community.”

The “no” vote came from Regent Ron Knecht. He said the need to develop the policy reflects the conflict when federal mandates that make it hard for the higher education system “to enforce our own state laws and be consistent with them.”

Ed Uehling, a Libertarian and longtime area political activist running for state Senate, was the only person to speak during the public comment period. He expressed disappointment at the regents’ need to rush out a policy.

“No one believes (federal government) is going to enforce (laws on medical marijuana),” Uehling said after the hearing. “The university people, who think supposedly, are total cowards.”

No students attended the hearing in the Nevada System of Higher Education’s Las Vegas office, which streamed the meeting from Reno.

UNLV spokesman Tony Allen said marijuana arrests or policy violations are reported under the drug-related violations along with other controlled substances, so it is unknown how many are connected to pot.

Nielsen said the 2013 Legislature’s adoption of guidelines regarding licensing of medical marijuana establishments caused many inquiries from the schools and student organizations about whether state law changes the system’s policies.

“Because of the change, we realized we needed to clarify for everyone that medical marijuana would also remain (prohibited) as it has been for many, many years,” Nielsen said.

Nielsen added that university systems where medical and recreational marijuana have been legalized have emphasized similar policies, using Colorado as an example.