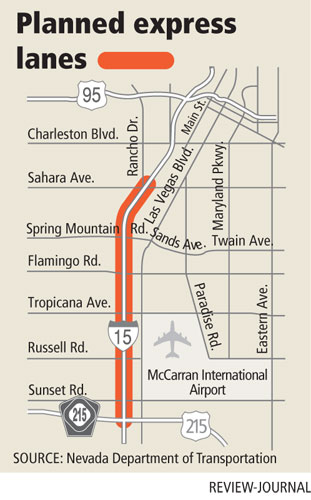 Constructing express lanes to ease congestion on Interstate 15 has been a bumpy ride for the Department of Transportation, which hopes to make motorists’ commutes a little smoother by opening completed stretches.

The express lanes are designed to guide motorists from Sahara Avenue to the Las Vegas Beltway without interference from merging traffic.

When the project is finished, tubular markers will separate two express lanes from those lanes from which motorists can exit along the way. It will be illegal for motorists to leave the lanes before the end of the express zone.

Rather than wait for the completion of the project, Department of Transportation engineers have decided to allow motorists to use the express lane stretches that are traffic-ready.

"In order to make it easier on traffic, we will reopen these lanes," said Mary Martini, an engineer with the Department of Transportation.

Express lanes are not reserved for high-occupancy vehicles, so even a car with just a driver and no passengers can use them. They are designed to scoot traffic past a five-mile stretch of exits and on-ramps. And they are expected to speed things up for motorists simply passing through town, such as commercial truck drivers.

The project has been under way for months, but the Transportation Department ran into snags below the railroad crossing near Spring Mountain Road.

Transportation officials hope opening some of the express lanes will ease traffic on Interstate 15 while crews fix the lanes below the railroad bridge.

For now, the express lanes will be marked by solid, double white lines, and they will be enforced by Nevada Highway Patrol officers.

The express lanes were expected to open this fall. Now Martini is reluctant to say when they will be fully operational.

"If all goes well, we’ll be looking at March or April," she said. "I don’t want to tell the public such and such. The worst-case scenario would be several months from now."

During construction, crews working on the $21.5 million project have hit several trouble spots, including running into more groundwater than anticipated.

Concerns about the water’s effect on the safety of the railroad prompted representatives from the Union Pacific Railroad Company, based in Omaha, Neb., to visit the site on numerous occasions.

"They need to be sure what we’re doing is safe," Martini said, adding that all of the work has to meet the railroad company’s standards.

Also, the project was delayed when crews unexpectedly ran into fiber optic cables near the railroad crossing.

Adding to the continuing delays is that work must stop each time a train passes, which is at least four times a day, Martini said.

The opening of the express lanes does not mean the freeway will finally be congestion-free.

About the same time the lanes are expected to open, work will start on the south Interstate 15 project.

That project will include new streets flanking the interstate, similar to frontage roads, and the construction of a new interchange at Blue Diamond Road, extending Sunset Road over the freeway and widening the Warm Springs Road bridge.

During that project, which is expected to be finished at the end of 2011, traffic will be disrupted between Tropicana Avenue and Blue Diamond Road.