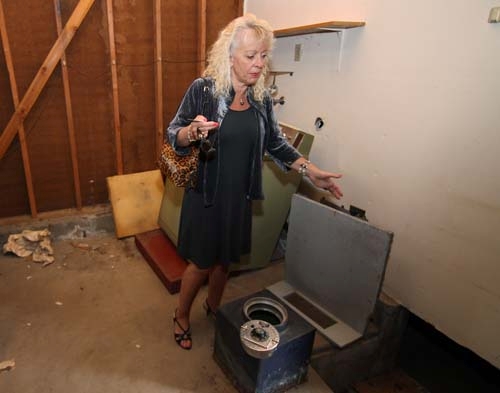 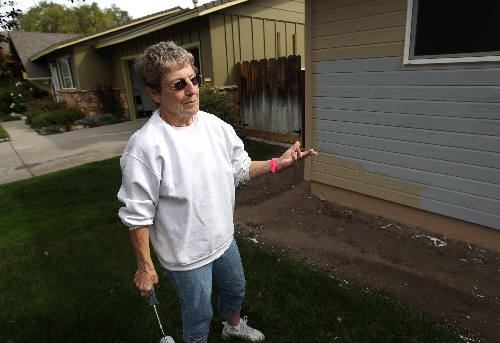 CARSON CITY – The horrible smell is the first thing that hits you when you walk into the ordinary-looking home in a tidy middle-class neighborhood on Mountain Street, about a mile north of the Governor’s Mansion.

This is the 1,200-square-foot home where sheriff’s deputies in July found the remains of 69-year-old recluse Walter Samaszko Jr. Neighbors had called police to complain about the stench coming for the home. Authorities determined that Samaszko had been dead for more than a month. A hazardous-materials team had to remove the remains. The body had decayed so much that the flooring had to be removed.

Carson City Clerk-Treasurer Alan Glover, who serves as public administrator, then asked Vine whether she would clean up the home, cart belongings to the dump or give them to charities and then sell the home.

On Aug. 1, four days into her cleanup, Vine started rummaging through a huge stack of empty boxes in the garage. She threw many into the trash bin that had been placed in the driveway. Then she found something heavy in boxes marked “Books.”

Gold also later was found in boxes in an old washing machine and in the crawl space in the garage.

“Alan get over here. There is a ton of money here,” she recollected saying.

Glover ultimately put the value of the gold they found, the value as determined by its weight, at $7 million. Also found in a safe was $12,000 in cash and $165,000 in stock accounts. He has hired two coin companies to grade the coins for their numismatic value, which might be millions higher. Some coins date to the 1840s.

Glover put the gold into his pickup and hauled it to the  courthouse vault. Now it rests in a vault at the Loomis Armed Truck Co., waiting for probate hearings and settlement proceedings.

It took Glover and three members of his staff two days just to count the gold coins.

“You never would have thought counting gold would become boring, but it did.”

The story of Samaszko and his gold has been repeated around the world over the past three weeks. What has been little noted is the honesty of Vine and the kind of gentle, but fearful and lonely man that she discovered “Walter” must have been as she looked through his belongings.

Vine, according to Glover, could have easily packed up the gold and headed off to a life of luxury anyplace in the world. No one ever would have known. Also, Glover could have assigned the cleanup work to a couple of unemployed men, as he sometimes does.

“There was temptation to take the gold,” said Vine as she walked Friday on the dirty orange carpet in the Samaszko living room. “Wouldn’t that go into everyone’s mind? We are all human. It is about doing the right thing. I have a 4-year-old grandson. I have to stand in front of a mirror in the morning and face myself. I prayed for the guy and blessed him every day I was there. My son says ‘Good job, Mom.’ “

“Jeri is the most honest person I have ever met,” Glover adds. “Most people are honest.”

Glover initially believed that Samaszko left no heirs. Neighbors did not know him. He seldom ever walked outside. He had the postal carrier put his mail in a slot in the garage wall, rather than deliver it to the front door. Every window in the home was covered with cardboard and aluminum to prevent anyone from looking inside. He had several weapons. His phone number was not listed in the phone book. There were books about government conspiracies and survivalism among his belongings.

Vine also discovered a cupboard filled top to bottom with cans of blueberry pancake mix and “forty, fifty, sixty  cans of  tuna.” Dozens of shoes and clothing that never had been worn were in a closet. Samaszko had a typewriter and several VCRs. He liked old music.

In a drawer in the bathroom, she found a woman’s makeup compact that  apparently belonged to his mother. She died in 1992, but “Walter” never threw it away.

The compact is the most poignant part of Samazsko’s story, at least to Vine.

“He was a real tender guy, devoted to his mother. This was a man with a spirit and a heart and a soul. He didn’t have enough love in his life after his mother died. This also was a man that came here to hide. He wanted to be safe from the world. It is a very sad story. He had a lot of gold, so what? It didn’t mean anything.”

Speculation in the neighborhood is that Samaszko and his mother moved to Carson City four decades ago from Pasadena, Calif., to hide from organized crime associates. Samaszko’s father had died a few years earlier in an industrial accident back east in what might have been a mob hit.

Glover isn’t sure. He does know that Walter Samaszko Sr. was a vice president of the J. Harris Pie Co. The company had plants in Chicago, Michigan and California and was sold in the early 1970s to Mrs. Smith’s Pies for $13 million to $15 million. The senior Samaszko had an interest in the company.

The younger Samaszko never worked during his 40 years in Carson City.

Glover initially believed he left no heirs. But with the help of lawyer Dawn Ellerbrock and after a week of detective work, largely through ancestor.com, and checking names left on the register for his mother’s Polish funeral, he located Arlene Magdanz. She is a divorced, 65-year-old substitute teacher living in an apartment in San Rafael, Calif. Magdanz is Samaszko’s first cousin.

She won’t talk to the media, on the advice of her lawyer. The Review-Journal’s repeated calls to her cellphone were not answered. Glover said she seldom spoke with Samaszko.

District Judge James Wilson will have to decide whether Magdanz indeed is Samaszko’s only heir. Glover would not be surprised if many others show up to claim a share of the gold.

If the heir cannot be substantiated, then funds from the sale of the gold would be placed in the state’s unclaimed property fund. If an heir is found later, then he or she could take the funds. In reality, heirs often are not found, and the money goes to the state general fund.

Glover expects that federal estate taxes on the home and the gold will be close to $1 million. Other taxes and payments also will be collected, but the heir should collect still more.

“Good for her,” Vine said. “It sounds like she needs the money.”

As Vine spoke about the cousin, Jerry Vance, who owns a house across the street, was painting the exterior of her home. A few minutes later, she said she never saw Samaszko. She has owned the home for more than a year.

“He never came out,” she said. “He must have done his shopping at night.”

Vance and her husband bought the home after its 97-year-old owner died. That man was Samaszko’s only known friend, she said.

“They would watch football games on TV together.”

Glover said he handles a couple of cases each year in which someone dies in a home without a will and the body is discovered later, but nothing as big as this case.

“We had one guy who left $2.5 million in stocks and bonds. He was a true miser. He wore the same shirt every day for two years. In the winter, he walked in the snow to the bank rather than take a taxi. I don’t think Walter was a miser. He didn’t spend much money, but he had clean Levis and shirts in his closet. I never met  him. You just don’t know why some people live the way they do.”

Vine already has sold the home, pending the completion of escrow and the probate proceedings. It took only two days to sell the property, which had been listed by Valley Realty and Management at $105,000. She declined to give the sale price, but the buyer is a local man who plans to fix up the home. The odor, she added, can be removed.

Homes in Carson City’s west side are in demand and sell almost immediately, according to Vine. The property was sold before Samaszko and his gold hoarding became a worldwide phenomenon.

But since then, she has been bombarded with calls from the media and from people who want to buy the home. Some believe some of the gold has not been found.

One would-be buyer even brought in a contractor who crawled under the house. Vine said the property has been checked so thoroughly there is no chance that any gold remains hidden.

“It is all about greed,” she said. “Nobody thinks about the man who lived here.”

A Bible and a pair of baby shoes remain in the garage, adjacent to where Vine discovered the first box of gold. There is no writing in the Bible, and she has no idea why the shoes are there. She decided they belong there.

“I am just the girl who cleaned out the house, but I got to know Walter intimately.”