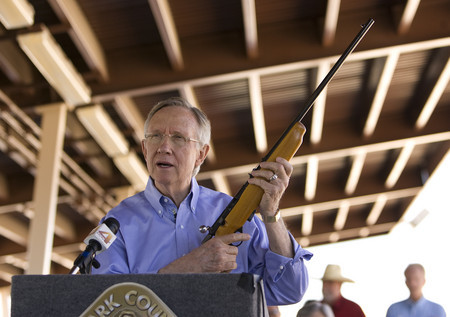 When Sen. Harry Reid, D-Nev., endorsed then-candidate Barack Obama for president, he called Obama a "once-in-a-generation leader who connects with the hopes and dreams of the American people."

At the time — summer of 2008 — Reid couldn’t have known his potential Republican challenger in 2010, Danny Tarkanian of Las Vegas, was among those Obama inspired.

To be perfectly clear, Tarkanian is critical of government spending under the Obama administration that he says on his Web site will create "runaway inflation and unsustainable deficits."

But he admired Obama’s fundraising prowess, especially his ability to raise vast amounts of money through small, online donations.

Tarkanian’s campaign workers hope to replicate the strategy as part of their effort to challenge Reid, who may well raise tens of millions of dollars in an effort to hold the seat.

"We’re very early, but we do use the Obama campaign as a model of where we’d like to be, tomorrow if we can, but in a few months," Tarkanian consultant Jamie Fisfis said.

The campaign got a big boost in that direction last week, when conservative radio host Hugh Hewitt launched an effort called "10 for Tark."

It’s an effort by Hewitt to urge followers to donate $10 to Tarkanian as a show of opposition to proposed health policy reforms Obama supports.

"It is just a ‘ding, ding, ding’ on my computer," he said of the donation alerts. "This is a substantial event for our campaign."

While the money is nice, Fisfis says he’s well aware it will take much more to win the Republican primary, let alone be competitive with Reid, the highest-ranking politician in Nevada history and a tough campaigner with connections in every corner of the state, not to mention his national support.

That’s why Fisfis is happy the Hewitt outreach is generating a large base of small donors; they will have an opportunity to help over the long haul of the campaign.

"We have the next however many months to work with these donors over and over again. It is not like it is stopping today," he said.

Last week while Tarkanian was getting support from Hewitt, Reid was bringing in much bigger guns, so to speak.

National Rifle Association CEO Wayne LaPierre attended the dedication of the Clark County Shooting Park to shower Reid with praise for his support of the Second Amendment.

Support from LaPierre could help Reid push back against critics who say he’s too liberal for gun-totin’ Nevada voters.

Reid supporters also pushed back against Fisfis, who said Reid’s support for gun rights wouldn’t be enough to boost his approval rating from the 37 percent of voters who told pollsters from Mason-Dixon they like the job Reid is doing in Congress.

After the Tarkanian campaign spoke up, an e-mail circulated stating Tarkanian received a "question mark" rating from the NRA in one previous campaign and an "F" in another.

Political Notebook confronted Tarkanian’s campaign on the issue and found the situation wasn’t as clear as Tarkanian being anti-gun.

Previous "C" and "F" grades from the NRA were based on a misunderstanding, Fisfis said. He said the "C" came after Tarkanian and the NRA had a misunderstanding on a response and that Tarkanian later said he agreed with the NRA. The "F" came after a gun-control support group endorsed Tarkanian in a race. Fisfis said Tarkanian didn’t seek the endorsement nor does he know why he got it, since by then he had signed up to be a lifetime member of the NRA.

The NRA did not return a call nor an e-mail from the Review-Journal seeking further clarification. Tarkanian has a more detailed statement about his Second Amendment beliefs under "issues" on his Web site.

Remarks by Reid and Sen. John Ensign, R-Nev., sucked up most of the attention at the shooting park event last week, so much so that one of the most colorful quotes of the day didn’t make the coverage.

Ever the optimist, Ensign was hopeful Las Vegas tourists would get in on the action at the new shooting park.

"Now we have a world-class shooting facility that can bring tourist dollars to our state for years and years and years to come, and we can create jobs right here in Southern Nevada that we need so desperately," Ensign said.

It would be an improvement over previous visitor destinations where people have decided to start shooting, such as MGM Grand, Caesars Palace and local strip clubs.

Rep. Dean Heller, R-Nev., must be studying at the Harry Reid School of Brusque Relations.

Not to be outdone, Heller used a town hall forum Tuesday to deliver a jab to someone who was unlucky enough to attempt to participate.

According to the Nevada Appeal, Heller asked for a show of hands by those who participated in the popular "cash for clunkers" program.

The congressman then pointed out one of the hand-raisers and said, "Congratulations. Everybody else in the room paid for your car."

The constituent wasn’t impressed by Heller’s rhetorical flourish. He declared, "I’ll never vote for you again," and left the event.