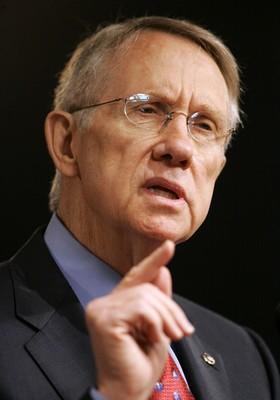 RENO — Sen. Harry Reid said Saturday he will do everything he can to stop construction of new coal-fired power plants proposed for Nevada.

Utility companies, Reid said, should instead invest their billions in solar, wind and geothermal power.

Speaking at the first Nevada Clean Energy Summit in Reno, Reid, D-Nev., said the coal-fired plants proposed for eastern Nevada would foul the air and lead to higher costs in terms of health problems for children and the elderly than they would save by using the cheaper fossil fuel to generate electricity.

The summit brought together about 600 elected officials, power company executives and developers and users of green energy technology for a wide-ranging discussion on alternative energy.

Reid, the Senate majority leader, said Nevada is wasting its sunlight, wind and geothermal resources every day and that the time is now to take advantage of these energy options.

“Fifty percent of the power comes from outside the state of Nevada, even though we have fuel shining on us every day: the sun,” he said.

Michael Yackira, chief executive officer of Reno-based Sierra Pacific Resources, the company that has proposed building one of the plants, said in comments to the group that the utility is strongly committed to alternative energy sources. The company wants to build the coal-fired $3.7 billion Ely Energy Center, which would generate 1,500 megawatts of electricity.

“Overall, we expect that more than $2 billion will be invested by us and others to more than triple our renewable energy supplies by 2015,” he said.

Over the past year, the company has signed nine contracts for approximately 300 megawatts of geothermal and solar energy to be produced in Nevada, Yackira said.

But the company needs a diversified portfolio of energy sources, and fossil-fuel power plants are part of that mix, he said.

Asked after his remarks to react to Reid, Yackira said building the company’s new coal plant will help the environment by allowing it to shut down less efficient facilities.

“What we are going to be building is the cleanest coal plant in the world,” he said.

• Nevada is No. 1 in geothermal energy use per capita in the nation, generating 110 watts per person compared to California, which produces less than 70 watts per capita.

• Nevada will be No. 1 in solar energy production per capita in the nation by the end of this year with projects now under way, generating 33 watts per person compared to California, which produces 18 watts per person.

• The Nevada Legislature in 2007 modified, but continued providing, property tax breaks for “green construction” designed to use less energy. One of those green projects is the MGM Mirage’s $7.4 billion CityCenter, a 76-acre mixed-use development on the Strip. CityCenter is the largest privately financed real estate project in the nation. It will include its own energy-efficient power plant and a people mover.

Reid said the coal-fired plants proposed for White Pine County would pollute the air over Great Basin National Park and other parks and wild areas of Utah.

It was a “matter of conscience” to oppose the plants, which Reid said he would have opposed anywhere in the United States. If Nevada’s utility companies need a “bridge” between old technology and clean energy, they should build more environmentally friendly natural gas plants to produce electricity until alternative sources can be developed, he said.

Reid said global warming is a reality, and just one of the proposed coal-fired plants would contribute to it by burning seven million tons of coal a year.

Gov. Jim Gibbons has expressed support for the plant construction.

Reid said he has not spoken to the Republican governor about the projects and that Gibbons is entitled to his views.

But if White Pine and other rural counties really want economic development, they should seek alternative energy projects, which have been shown to create jobs, he said.

Information provided at the summit suggests there is huge potential for alternative energy development in Nevada.

There is currently 550 megawatts of geothermal energy under development in Nevada, with the potential for up to 1,500 megawatts total.

Nevada also has more than 24 million acres of land within 10 miles of existing transmission lines classified as “good” to “outstanding” for wind-energy development.

If environmentally sensitive lands and lands with conflicting use were excluded, the state could still generate 63 million megawatt hours, 280 percent of the entire state’s current consumption.

“Nevada has the highest per capita electric consumption in the West,” she said. “Controlling consumption by reducing demand has to be a central part of Nevada’s energy policy. The cheapest and cleanest watt is the one that we never have to produce.”

Lt. Gov. Brian Krolicki also spoke, saying the state is committed to alternative energy development and providing any assistance it can.

“It’s going to be good business being green,” he said.