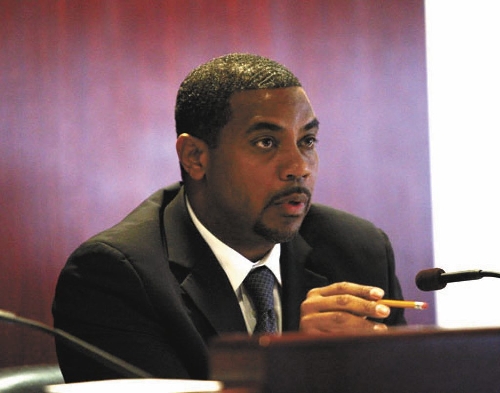 Nevada Senate Majority Leader Steven Horsford has a history of defaulting on car and home loans, not paying bills, and being repeatedly sued to force him to pay, according to legal documents that show the congressional candidate also ignored a traffic ticket until his driver’s license was suspended.

Most of the financial problems date between 1998 and 2002 when Horsford, in his 20s, was struggling to pay rent and help raise two younger siblings. But one occurred last year when the Senate leader was sued in July 2011 for failing to pay $397 for installation of audio and video equipment in his Las Vegas home.

In the end, Horsford, 38, resolved all of the liens and legal financial disputes, paying about $20,000. But Republican foes of the Democratic House candidate who provided documents verified by the Las Vegas Review-Journal contend they show a pattern of Horsford playing by his own rules.

"The more Nevada voters learn about Horsford, the more it becomes clear that he has a troubling history of ignoring the rules the rest of Nevadans follow," said Daniel Scarpinato, spokesman for the National Republican Congressional Committee in Washington, D.C.

Horsford’s campaign said his money troubles grew out of an automobile accident he had while attending the University of Nevada, Reno, in the late 1990s, and it took him years to dig out of debt. Although Horsford wasn’t seriously injured, he had medical bills from an overnight hospital stay, his car was totaled, and he couldn’t quickly pay off his car loan, his campaign manager Geoff Mackler said.

"Like many Nevadans, Steven knows what it means to struggle and live paycheck to paycheck," Mackler said in a statement. "He also knows what it feels like to live one unforeseen event away from economic disaster. Over a decade ago, Steven was involved in a serious car accident. This led to thousands of dollars in bills, and while he did everything he could to pay them off right away, as a young man working his way through college, he just couldn’t keep up. He felt horrible about it."

Mackler said Horsford took more part-time work to get money and "paid every bill in full."

As for the $396.76 owed to Premiere Home Entertainment last year, Horsford’s campaign said the senator hadn’t seen any bills from the company while serving four months in the Legislature in Carson City from February to June 2011.

Premiere sued Horsford on July 1 in Las Vegas Justice Court. The case was voluntarily dismissed on Feb. 3 after the bill was paid.

Horsford’s behavior last year followed the same pattern as his previous financial and legal problems: He eventually resolved the cases but ignored bills, legal notices and court orders for months.

"It’s not just that he didn’t pay his bills, but he didn’t even show up in court," Scarpinato said.

Horsford refused to be interviewed for this article despite several requests made through his campaign this week. On Thursday, he declined comment when asked outside of a Legislative Commission meeting in Las Vegas whether he had anything to say about his past bill-paying problems.

"We’ve answered all the questions," Horsford said, adding he was late for another meeting.

Here’s a look at some of the past cases:

■ On Aug. 4, 2000, Michael Waller sued Horsford in Las Vegas Justice Court for $4,928.66 for defaulting on a promissory note Waller co-signed with Horsford to buy a car. Waller said Horsford didn’t follow through on his promise to pay installments of $150 a month to settle the debt. Horsford didn’t answer the legal complaint. The judge ruled in Waller’s favor. On Aug. 10, 2001, Horsford settled the case, paying $6,353.66, including the loan, interest, court costs and attorney’s fees.

■ On May 3, 2000, Collection Service of Nevada sued Horsford on behalf of Carson Tahoe Hospital in Las Vegas Justice Court for medical services to Horsford. He failed to answer the complaint. On March 30, 2001, the judge awarded the collection service $258.43 for the bill, plus $138 in interest, court costs and attorney’s fees. On April 17, 2001, Horsford paid the judgment.

■ In 1999 and 2000, several liens were issued against Horsford’s home for unpaid bills, including $154.44 in sewer fees, $65.60 for garbage collection, and more than $1,700 by the Lakes Pacific Townhomes Association for delinquent assessments. At least two of the liens were settled, according to records.

Horsford’s campaign argues his past financial difficulties give him insight into troubles Nevadans have experienced in the past few years of record high unemployment and foreclosures.

"Because of his experience Steven understands what so many Nevadans are going through, and he’s the only candidate who’s focused on solutions to put people back to work and keep our economic recovery moving in the right direction," said Mackler, his campaign manager.

Waller, who sued Horsford over the car loan, said he was a family friend and remains a supporter. He said he went to court to protect himself from bill collectors and creditors.

"Unfortunately, he was involved in an accident with the car that resulted with bills that put him in a tough spot," said Waller of Las Vegas. "I was protecting myself from the bank because they were coming after me. I had no doubt he would take care of his financial commitment. I still call him a friend."

Billy Vassiliadis, CEO of R&R Partners, said when Horsford started working at the public relations and advertising firm in 1996, he was still trying to finish college and was traveling between Reno and Las Vegas to help take care of a younger brother and sister. Horsford’s mother had a drug problem, which she has since kicked, and his father was killed when he was 19 years old.

Horsford still has not completed his bachelor’s degree at UNR. He began attending the university in the fall of 1991, according to school records. They showed he studied political science from 1992 through 1995 and continued in the spring of 1996, the fall of 1997 and the fall of 2009.

"At a very young age, he undertook a lot of obligations that most of us couldn’t even relate to or understand," Vassiliadis said. "In the course of that, he had some financial troubles. I don’t see that as a campaign issue. If anything, I think he should wear it as a badge of honor."

Although privately Horsford was having money troubles, publicly he was being lauded as a bright, up and coming Democrat with a compelling personal story and political future. In 2001, Horsford became chief executive officer of the Culinary Training Academy, raising his public profile.

In 1999, the Las Vegas Chamber of Commerce gave Horsford a Community Achievement Award. In 2000, he got a Community Leader Award from the Dr. Martin Luther King Jr. Committee, his Senate biography says. He was among the "Top 40 Under 40" in a Las Vegas business magazine in 2002.

After his 2004 Senate election, he became Nevada’s first black Senate majority leader in 2008.

Republicans are targeting Horsford to soften him up for the fall campaign when he will face the winner of a competitive GOP primary. Horsford has no Democratic opposition for the 4th Congressional District and is backed by U.S. Sen. Harry Reid, D-Nev., and President Barack Obama.

Horsford is considered the favorite to win because registered Democratic voters outnumber Republicans by nearly 10 percentage points in the district. The GOP thinks it has a chance because the district is new and covers all or part of six rural counties as well as parts of populous Clark County. The GOP-leaning counties in the district include Lyon, Esmeralda, Lincoln, Mineral, Nye and White Pine.

David Damore, a political science professor at the University of Nevada, Las Vegas, said he is not sure the hardball GOP tactics will work to undermine Horsford’s chances with voters. The NRCC has launched a website — thehorsfordrules.com — to list the senator’s missteps.

The website debuted its first "Horsford Rule" — "I can park wherever I want" — by highlighting a 2009 incident when Horsford was caught parking in a space for handicapped drivers.

"I guess they want to start the drum beat now and sort of build this narrative against him for the next few months," Damore said, adding he is skeptical Horsford’s past financial troubles will hurt him. "It’s kind of a reach to go back that far. I think a lot of people can relate."

Recent missteps could do more harm.

In the past couple of years, Horsford drew criticism for a "pay to play" proposal that offered access to himself and other lawmakers in exchange for campaign contributions and for accepting a trip to the Bahamas from an online poker company, PokerStars, that wanted legal changes in Nevada. Horsford withdrew the "pay to play" idea, but defended his overseas trip as research.