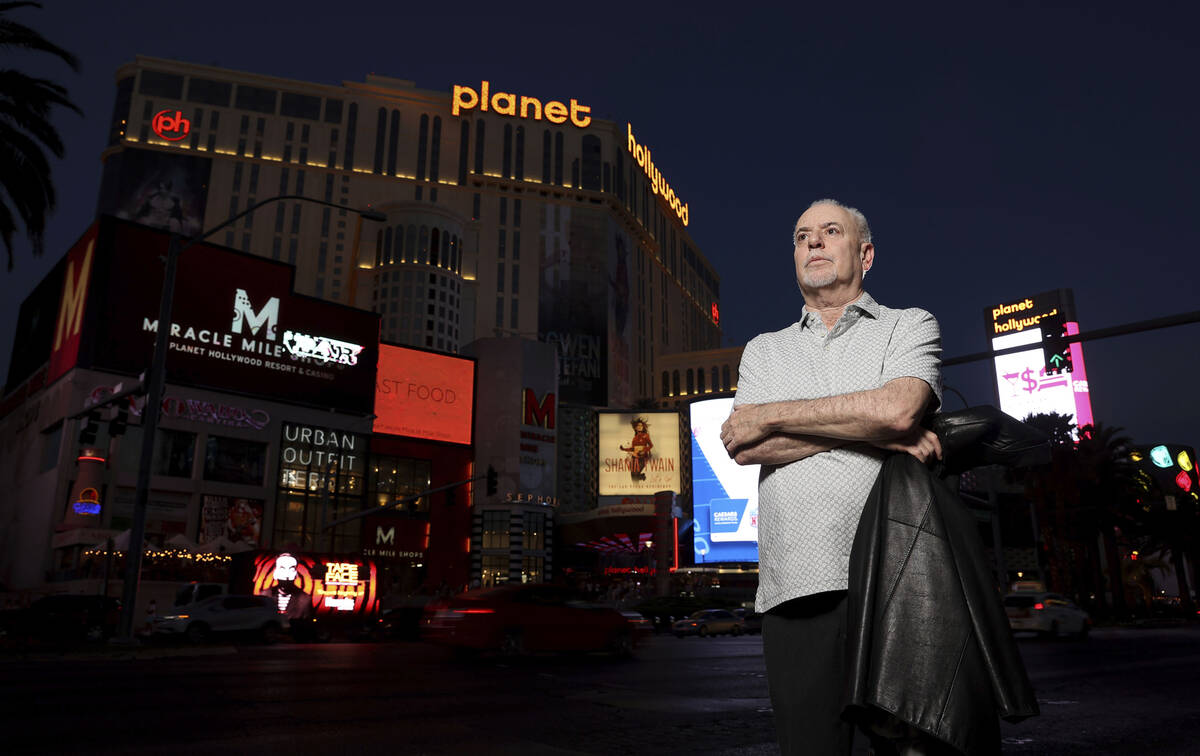 Jeff German, host of "Mobbed Up," poses with Planet Hollywood, formerly the Aladdin, in the background on the Strip in Las Vegas, on June 2, 2021. (K.M. Cannon/Las Vegas Review-Journal via AP)

The Review-Journal plans to donate $50,000 to two nonprofits in honor of slain investigative reporter Jeff German, the company announced Wednesday.

German, 69, was stabbed to death Sept. 2 outside his northwest Las Vegas home. He had reported on corruption, crime and courts in Las Vegas for four decades. Robert Telles, a Clark County elected official who had been the focus of a series of stories by German, was arrested Sept. 7 in connection with the killing and has been charged with murder with a deadly weapon of a victim who is an older person.

“In Jeff German’s name, we make these donations in memory of our friend and colleague,” Review-Journal Publisher and Editor Keith Moyer said. “As requested by Jeff’s family, we make a contribution to Three Square, a wonderful Southern Nevada food bank that helps so many in need. And we are buoyed by the national Investigative Reporters & Editors’ creation of a training fund in Jeff’s name, and are donating seed money to that good cause.”

German’s family set up a donation portal for Three Square for those wishing to donate in his memory. Brian Burton, the nonprofit’s president and CEO, said the Review-Journal’s donation and nearly 200 others received to date will provide an additional 134,118 meals to the valley’s food-insecure.

“All of us at Three Square Food Bank extend our deepest condolences to the family, friends and colleagues of Las Vegas reporter Jeff German, and all those he served through his valiant investigative journalism,” Burton said in a statement. “At the request of Jeff’s family, a campaign was created to accept donations in his honor to help the hundreds of thousands of Southern Nevadans who struggle with hunger, commemorating his devotion to our community and legacy of seeking justice for others.”

Those who wish to donate in memory of German can find the link here. There are six options, from groceries for a month for a family of four to health-conscious food for seniors.

IRE established a fund in German’s name to provide journalists with investigative reporting skills training. German was an early member of the professional organization, attending the San Diego conference in 1981, and was an active member at the time of his death, the organization said.

“Jeff German devoted his professional life to investigating people in power and exposing corruption, ensuring the people in his community were well-informed about what their officials were doing and how their taxes were being spent — or wasted,” IRE Executive Director Diana Fuentes said. “He is a role model for journalists at all stages in their careers. Journalism is the foundation of democracy, and IRE seeks to ensure that investigative journalism continues. The fund will help meet that goal.”

The fund is accepting donations on the organization’s website, and via Venmo, Facebook and PayPal. The organization asks that those who donate write “Jeff German Fund” in the message or tribute line. The fund has reached $5,000 in donations to date and there is no deadline for contributions.