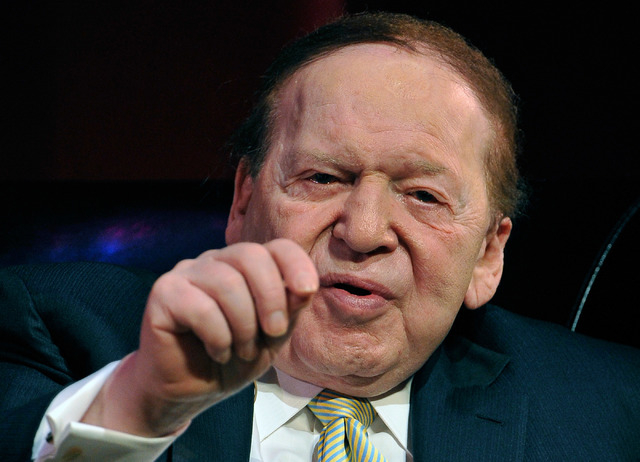 The stage belonged to casino industry titan Sheldon Adelson on Monday afternoon at UNLV’s Artemus W. Ham Concert Hall, and what he had to say about his early business career would have made Horatio Alger blush.

As Adelson told it, Mark the Match Boy, Phil the Fiddler, Julius the Street Boy and Ragged Dick himself had nothing on Sheldon the Newsy.

Basking in the adulatory spotlight as the main attraction of the William F. Harrah College of Hotel Administration’s Conversations on Being Successful series, the multi-billionaire was in fine storytelling form. He tossed off one-liners and regaled playful interviewer Arte Nathan and a near-capacity audience with tales of his rise from extremely humble beginnings as the son of a cabdriver in the Dorchester section of Boston to international superstardom as the gaming industry’s biggest player.

Adelson held forth for more than one hour on everything from his formula for the staggering success of his casino empire to his unbridled opposition to Internet gambling. But the crowd appeared to most appreciate his colorful tales of his early life.

Even those very familiar with Adelson’s childhood stories would surely have been entertained by his retelling of them on Monday. With a personal fortune recently estimated at $40 billion, which according to Forbes makes him the world’s eighth-richest person, the 80-year-old Adelson qualifies as a success by any monetary measure.

And the way Adelson remembers it, his is a rags-to-riches story — except he was too poor to afford rags. One of four children, the Adelson family was so bereft it slept in one bedroom. Probably to keep warm during those frosty Dorchester winters.

Adelson said his first job was selling newspapers on the street corner. He was 10, but even then the entrepreneurial juices were flowing.

Adelson quickly realized it was better to “buy” the corner than to work for someone who only let him keep a few nickels at the end of the day. But where would he get the $200 asking price?

His parents couldn’t help him.

“Now, 200 bucks to my parents in those days is like $2 million today,” he said, explaining that he managed to borrow $200 from his “Uncle Al,” the treasurer of a credit union.

Never mind that Adelson was only 10. He landed the loan and bought the corner, eventually parlaying the early business venture into two corners with help from a second advance from his generous and demanding uncle.

“He said, ‘The way you conduct the rest of your life will depend on how you handle this,’ ” Adelson said.

Forget that Mark the Match Boy didn’t have an inside man at a credit union. That first $200 loan was nothing compared with what came next, according to Adelson’s recollection.

With his newspaper experience behind him, at 16 Adelson said he borrowed $10,000 in 1948 from Uncle Al to purchase a candy vending machine business in the Boston area. Looks like Ragged Dick had a sugar daddy. The fact $10,000 could have bought a home in 1948 didn’t detract a bit from the audience’s thorough enjoyment of the rags-to-riches tale.

And Sheldon Adelson, former newsy, was on his way in a career that landed in Las Vegas and now includes Macau, where his casino resorts set an industry standard for success at the bottom line.

Adelson told the audience made up predominantly of university business students about the importance of taking risks and questioning the status quo.

“You cannot be an entrepreneur if you don’t take risks,” he said.

But it also helps to have an Uncle Al.