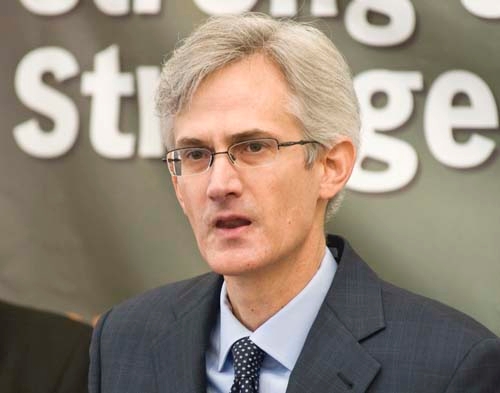 CARSON CITY — Former Clark County Commissioner Rory Reid agreed to pay a $25,000 penalty from his own pocket to settle accusations he skirted campaign finance laws, under a deal the secretary of state announced Friday.

Reid was accused of funneling more than $900,000 to his gubernatorial campaign last year through 90 shell organizations in an effort to bypass limits on political donations.

The scheme was described as “conduit contributions,” an illegal practice that aims to mask the true source of the money.

Reid, a Democrat who lost the governor’s race to Republican Brian Sandoval, will pay the fine with his own money and not from campaign funds.

In an interview Friday, Reid denied wrongdoing and said he settled to avoid years of litigation.

“I’m gratified that they didn’t find willful misconduct on my part,” Reid said. “I followed the law. This settlement is an acknowledgment that the law was vague.”

Two others involved in Reid’s campaign, David Cohen and Joanna Paul, must pay a total of $2,500.

“My office has thoroughly reviewed the facts relating to this case with the full cooperation of the interested parties,” Secretary of State Ross Miller said in a news release. “This negotiated settlement ensures the public of my intention to vigorously enforce Nevada’s elections laws.”

Reid’s $25,000 fine is one of the largest involving a state political campaign in Nevada.

In a detailed statement, Miller’s office insisted that Reid violated campaign financing laws through his use of political action committees.

Reid created the Economic Leadership PAC, which took in $933,300. The money was disbursed in smaller chunks through 90 PACs that all shared the same address at 716 Kelso Way, according to the statement.

In Nevada, a single contributor can donate up to $10,000 to a candidate for state office, but larger donations to PACs are allowed. Reid’s arrangement allowed for donations bigger than $10,000 to flow through the various PACs and into his campaign account.

Reid contends that he never tried to hide the source of the donations and disclosed every facet of the operation.

The secretary of state in his statement acknowledged that Reid and his staffers complied with guidelines for reporting campaign contributions.

However, the PAC structure appeared to violate state law because money from one entity was dispensed through others with different names, the statement said.

An attorney representing the Reid campaign inquired with the secretary of state’s office about whether this method of fundraising was lawful, the statement said. Reid’s attorney later claimed he was told that the method was permissible.

But the conversation between the parties was actually about a legal fundraising practice known as “bundling,” the statement said.

With bundling, a person or organization submits contributions in a lump sum from a group of donors, such as friends and relatives. Each donation is accounted for.

That differs from conduit contributions, in which an entity funnels a hefty donation in smaller pieces through multiple people or PACs.

The statement said that Reid admitted no impropriety and that he and state officials agreed to the settlement to avoid prolonged litigation and escalating costs.

Reid said he hopes the outcome will help clarify the campaign-funding laws, so future political candidates will understand them. Resolving this matter now will save money, both for him and the public, he said.

“While I think the secretary of state’s interpretation is wrong, I don’t think it’s right to use up further judicial resources on this,” Reid said. “I’m happy to move on and put this behind me.”