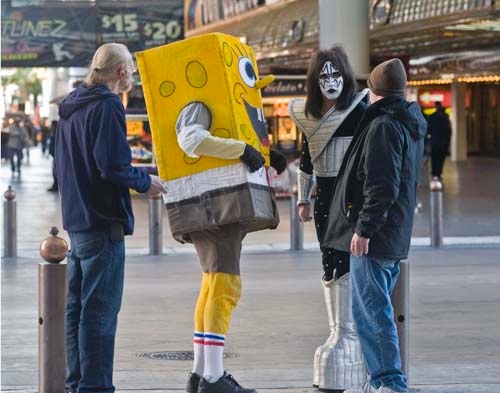 For the first time in nearly 15 years, Las Vegas on Wednesday enacted rules governing conduct at the Fremont Street Experience that won’t lead to a federal free speech lawsuit — and the City Council was all kinds of grumpy about it.

"I, with great displeasure, move for approval of this item. This fight is not over," Councilman Ricki Barlow said.

The council adopted the new ordinance 6-0.

The ordinance requires street performers, panhandlers and the like to stay 20 feet away from doors, ATMs, fire lanes and crosswalks, and 10 feet away from retail kiosks and outdoor cafes.

It also sets up rules about using tables in the downtown pedestrian mall, limits the amount of space a street performer can occupy and caps how loud someone using an amplifier can be.

The goal is to allow foot traffic to flow and prevent interference with visitors and Fremont Street Experience-sanctioned entertainment while respecting the free speech rights of individuals.

Mayor Oscar Goodman lambasted the ordinance and the legal proceedings that led to it.

The city had more restrictive rules barring unsanctioned entertainment under the video canopy, but courts repeatedly struck those down, holding that the Fremont Street Experience, created from a city-owned street, is a public forum.

"I don’t like it," Goodman said, calling that ruling "dead wrong."

"I don’t think the Fremont Street Experience is a public street. I think it’s a private enterprise."

He and others worried that hawkers who hand out escort service advertisements will start showing up downtown and become as ubiquitous as they are on the Strip.

"I hope we don’t have the situation on Fremont Street that we have on the Strip because we might lose a family venue," Goodman said.

Councilman Steve Ross said street performers, or "buskers," should have to be licensed before they can perform.

"I think we’re going to revisit this again someday," Ross said. "This is the start of the path in the right direction. I don’t think we’re quite done yet."

His concerns were echoed by Councilman Steve Wolfson, who said many of the street performers appear in costume and take pictures with tourists for tips.

"The folks come down, many of them wearing masks. The next thing we know, the children are being touched and picked up — in a nice way," he added hastily. "But we don’t know who these people are."

Wolfson was absent when the vote on the ordinance took place.

The city, Fremont Street Experience LLC and the American Civil Liberties Union of Nevada clashed for years, starting in 1997, over rules concerning the pedestrian mall. Court decisions generally went against the city. All parties worked together to craft the new ordinance.

Allen Lichtenstein, general counsel for the ACLU, asked that city officials approach his organization again if the rules need to be adjusted.

"I don’t want to go back to court," he said. "We do live in a nation of laws, and we live with laws that we don’t like. We never quite get to a situation where we’re completely happy with the results."

Council members said they voted for the ordinance because they thought it was worthwhile to have some agreed-upon rules in place .

"We have to start over again," Mayor Pro Tem Gary Reese said. "That’s what we’re doing today, starting over again."