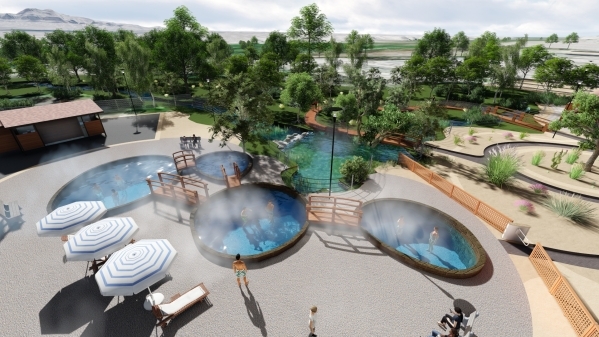 A rendering shows the proposed development of Ash Springs, a popular swimming hole 100 miles north of Las Vegas that the Bureau of Land Management closed in 2013. (Courtesy of Sam Lytle/CivilFX.com)

The people of Pahranagat Valley want their swimming hole back.

More than two years have passed since the Bureau of Land Management closed the popular, spring-fed pools at the Ash Springs Recreation Site amid concerns about visitor safety and environmental damage.

Now a group of area residents is floating a detailed plan — complete with 3-D renderings — to develop and reopen the site as public park and swimming area.

The Friends of Pahranagat Valley met monthly for more than a year to develop their proposal, which includes four man-made soaking pools next to a fenced natural area where swimming would be prohibited to protect native plants and endangered fish 100 miles north of Las Vegas near the town of Alamo.

Lytle was born and raised in Alamo, but he moved away to study civil engineering at UNLV and design projects for the Nevada Department of Transportation. Now he’s back in Alamo because he and his wife wanted their children to have the same small-town upbringing he did, including frequent trips to what locals call “Little Ash.”

“It was the swimming hole in town, so we went as often as we could,” Lytle said. “Now there’s no place for our kids to swim, so we’d really like to see the place reopen.”

Friends president Robin Rowley also grew-up in Alamo, and so did her father.

She said local residents started meeting about Ash Springs even before the BLM closed it, because the area was being overrun by out-of-town visitors and illicit campers who trashed the grounds and fouled the water.

“It was just a free-for-all. There was no management,” Rowley said. “We haven’t been able to use it for years. It’s been an issue for a long time — way before it was closed.”

By charging $3 to $8 for daily use and $100 for an annual family pass, they think they can help get visitation under control while bringing in about $80,000 a year, more than enough to cover what they think is needed to operate and maintain the site.

They want to use federal grants and money raised by the community to pay for their proposed improvements to Ash Springs. Then, once the work is done, the Friends are offering to manage the site for the BLM, at least initially.

Ultimately, Rowley said, they hope to see the federal government transfer ownership of the property to Lincoln County — once the locals prove they can effectively run the place and collect enough money to sustain it.

Shirley Johnson, an assistant field manager for the bureau’s Caliente field office, said she can’t recall a more proactive and professional proposal from a group of local stakeholders.

“I’d say it’s a first for me,” Johnson said. “I was blown away by what they produced.”

The BLM closed Ash Springs on July 6, 2013, after a ranger noticed that a brick wall supporting one side of the pool looked ready to collapse.

The following June, BLM officials announced that the site would remain closed for 2 years while they wrote a management plan and environmental assessment.

Johnson said it has taken longer than expected to secure funding for those documents, so her office is getting ready to extend the closure into 2017.

She said she hopes to see the management plan finished by this September and the environmental assessment done sometime next year.

Among other things, the assessment will look at how any proposed work or activity at Ash Springs will impact two federally protected fish — the Pahranagat roundtail chub and the White River springfish — that live in the network of springs and creeks just off U.S. Highway 93.

Johnson said the plan from the Friends of Pahranagat Valley is one of several alternatives that will be considered, and there will be plenty of opportunities for public input along the way, including two upcoming meetings Feb. 3 in Las Vegas and Feb. 4 in Alamo.

“This is not the BLM dictating what we’re going to do,” she said. “We want the public to participate. This is truly going to be a public process.”

As good Friends should, Pahranagat Valley residents are trying to remain patient.

“We all understand that it might take several years to happen,” Lytle said. “It’s a slow process, but our kids are young.”

3
LETTER: Vegas had better prepare for another shutdown