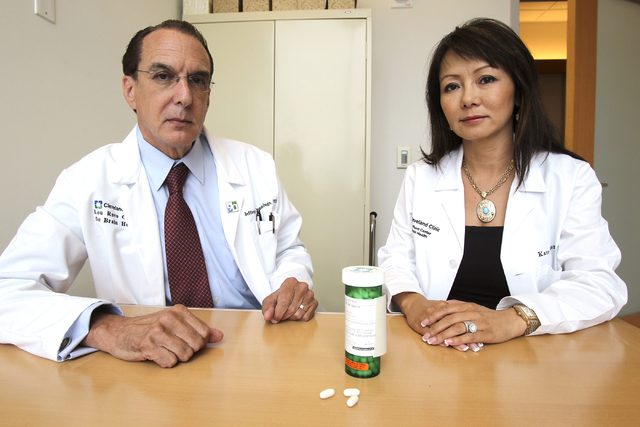 The Cleveland Clinic Lou Ruvo Center for Brain Health is about to participate in the largest Alzheimer’s disease prevention study in the world.

To do so, researchers at the downtown Las Vegas center say they need 10,000 volunteers from Southern Nevada to come forward for screening for a genetic profile — a specific profile that will result in 120 participants. The study has dual purposes: testing the effectiveness of a drug to prevent Alzheimer’s and seeing whether a particular genetic profile elevates the risk for the disease.

“What’s unique in this study is that we’re looking for cognitively normal people, people with no complaints about memory,” Dr. Kate Zhong, the Ruvo Center’s senior director of clinical research and development, said Friday.

“There have been some promising results based on trials with a small number of participants, but to really see if something is effective, it must be tested on a global scale. This is a critically important study.”

Alzheimer’s disease, which causes dramatic problems with memory, thinking and behavior, is the sixth-leading cause of death in the United States and the only one of the top 10 without an identified way to cure, prevent or slow its progression.

Given that the number of Americans living with Alzheimer’s is expected to jump from 5.4 million to 16 million in less than 40 years — the number in Nevada, 29,000, is expected to double by 2025 — Zhong said this study is an indication that researchers and pharmaceutical companies are showing a sense of urgency in dealing with a plague in which costs of care are expected to rise from $200 billion today to $1.1 trillion in 2050.

The five-year, double-blind, placebo-controlled study was initiated and funded by Takeda Pharmaceutical Co. Limited and its partner, Zinfandel Pharmaceuticals Inc.

A total of 50 sites in North America and Europe are expected to screen as many as 50,000 people before engaging in the study known as the TOMMORROW trial with about 6,000 participants worldwide. Men and women between 65 and 83 years of age with no memory impairment are sought.

Peggy Vaughn, a spokeswoman with the National Institute of Aging, said Friday she has never heard of an Alzheimer’s clinical trial with “anywhere near” 6,000 participants.

The goal in Southern Nevada is to end up with about 120 participants and the same number at the Cleveland Clinic site in Westin, Fla., Zhong said. The screening process could take two years.

“The best treatment is prevention,” Zhong said. “We’re excited to be part of this. What’s happened in earlier studies of the drug involved here gives us hope that it can prevent cognitive impairment.”

The drug, AD-4833, or pioglitazone, is approved by the FDA to treat Type 2 diabetes. It reduces inflammation and has a protective effect in the brain that can prevent high-risk patients from developing Alzheimer’s.

Researchers believe a link may occur between Type 2 diabetes and Alzheimer’s because of the complex manner in which diabetes affects the ability of the brain and other body tissues to use sugar and respond to insulin.

What excites Zhong is that AD-4833 is part of a program to “repurpose” or “reposition” drugs.

“It has already been tested for safety, so if it works for Alzheimer’s, we can cut years off what it would take to get it to the marketplace,” she said, adding that it takes as long as a dozen years or more to get a drug approved.

Screening people for the trial through blood samples, Zhong said, is critical because researchers want to ensure participants have the TOMM40 gene, which scientists have hypothesized further refines the risk of getting Alzheimer’s.

Previous studies have indicated that age and the APOE4 gene elevated the risk of acquiring the disease.

If scientists can validate TOMM40 as a new biomarker for the disease and can determine whether participants are at risk of developing cognitive impairment because of Alzheimer’s within the next five years, then the chances of earlier detection are better, affording researchers a target for treatment, Zhong said.

Those trial recipients with a genetic profile considered high risk — such as an APOE4 and TOMM40 combination — will have a 50 percent chance to receive either AD-4833 or the placebo. The study will evaluate the drug versus placebo in delaying the onset of Alzheimer’s in cognitively normal individuals.

Participants in the trial will be contacted every three months either through phone calls or site visits.

Dr. Jeffrey Cummings, medical director of the Ruvo Center, can’t wait for the trial to begin.

“The TOMMORROW trial allows us to take a look at how we can combat Alzheimer’s disease before it even takes hold by studying cognitively normal individuals with no symptoms of memory impairment,” he said.

“Until now, the bulk of our research was focused on treating the disease, but with the advances in the science behind genetic biomarkers, we can now identify those who are predisposed to Alzheimer’s and start down the path of identifying drugs that may have the potential to prevent the disease altogether.”