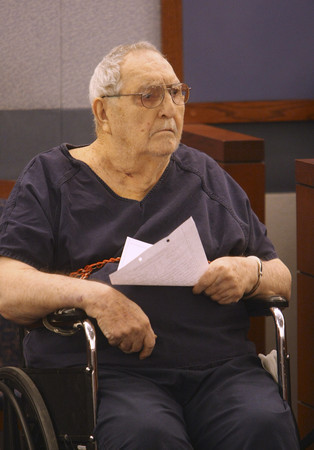 The 86-year-old man accused of fatally shooting his wife before attempting suicide has been released from jail.

Justice of the Peace Nancy Oesterle on Tuesday ordered that Joseph Woods be moved from the Clark County Detention Center to a nursing home so he could receive appropriate medical treatment.

Woods is accused of shooting his 80-year-old wife, Kay Woods, on Sept. 24.

She suffered from chronic pain and illness.

Authorities said the two apparently had a murder-suicide pact.

The husband and wife were found in bed at their home at 1808 S. 10th St., near St. Louis Avenue and Maryland Parkway.

Kay Woods died at the scene from a gunshot wound in her shoulder. Joseph Woods shot himself in the abdomen.

Deputy Public Defender Dan Silverstein said Joseph Woods probably would have died sooner rather than later if he had remained in jail.

“The jail was killing him,” Silverstein said.

He said Woods had to be taken to University Medical Center for treatment on more than one occasion while in jail.

Oesterle was concerned that Woods would attempt suicide again if released, but a psychological evaluation alleviated those concerns, Silverstein said.