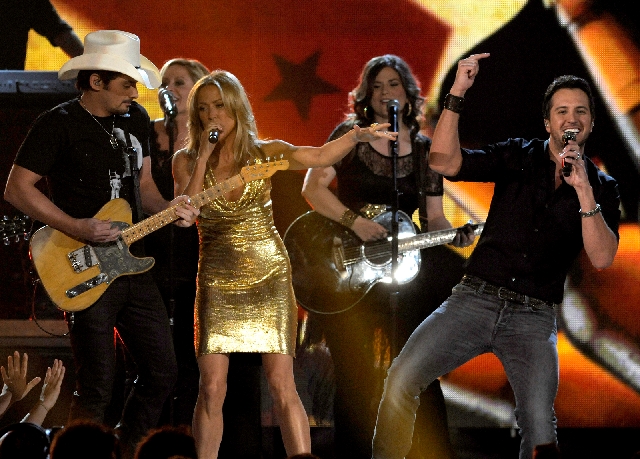 Brad Paisley, left, and Sheryl Crow perform Sunday with Luke Bryan at the Academy of Country Music Awards at the MGM Grand Garden.

Luke Bryan has tamed down his award show celebrations.

Last June, he took some criticism at the Country Music Awards in Nashville, Tenn., when his camouflaged underwear was tossed into the crowd by presenter Tom Arnold after winning male video of the year for his song “I Don’t Want This Night to End.”

A different side emerged Sunday after Bryan’s big night at the 48th annual Academy of Country Music Awards at the MGM Grand Garden arena.

A spy saw Bryan praying backstage with his wife, parents and grandmother after winning entertainer of the year and vocal event of the year with Jason and Eric Church.

Bryan told reporters, “My family has dealt with a lot of tragedy in our lives, losing my older brother and my older sister — you know they are in heaven smiling down on moments like this. You are overwhelmed with emotion; it was an amazing feeling, and one that I would be amazed if it was ever trumped.”

I owe this story to John and Li Ann Holmes of Denver, thanks to a chance meeting last Friday at a restaurant following the Colorado Rockies’ 20th anniversary opener.

The first time they took their daughters, Camden and Reagan, to Las Vegas they were driving past the Excalibur, which resembles a Disney-inspired castle. A little voice from the back seat said, “That’s where the princess lives.” …

Departures, a luxury lifestyles magazine published by American Express, is in town for a Rat Pack-themed photo shoot that includes chefs Scott Conant and Bobby Flay. Also here : New York “Iron Chef” contestants Geoffrey Zakarian and Marcus Samuelsson. The group was spotted Monday at The Cosmopolitan, on the terrace of Comme Ca, dining at Estiatorio Milos and having drinks at Marquee.

Actor Michael Caine, dining at Andrea’s (Encore) Monday. He is in town as an honoree with Quincy Jones at Larry Ruvo’s Keep Memory Alive gala at the MGM Grand Garden arena. …

Shania Twain, with friends at a meet and greet after the Blue Man Group’s performance on Monday (Venetian). … Former Wynn headliner Garth Brooks, at the American Country Music Awards show with his youngest daughter, Allie, a high school junior. Brooks has indicated he will start touring in the fall of 2014, after Allie graduates. … Actor Luke Wilson and “King of the Hill” creator Mike Judge, dining Sunday at Holstein’s Shakes and Buns (Cosmopolitan).

“Dennis Rodman is on the show tonight, fresh off his trip to North Korea and his appearance on ‘Celebrity Apprentice.’ I’m gonna ask him what it was like to spend time with a crazy, power-hungry madman — and then we’ll talk about Kim Jong Un.” — Jimmy Fallon