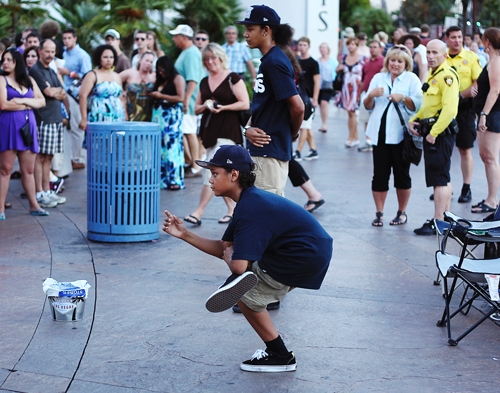 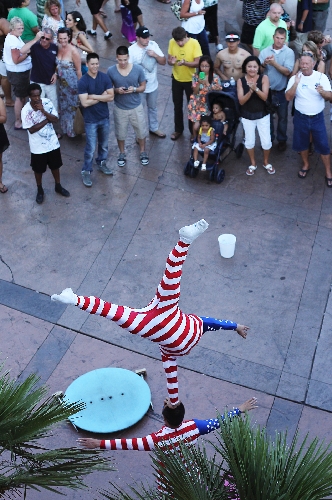 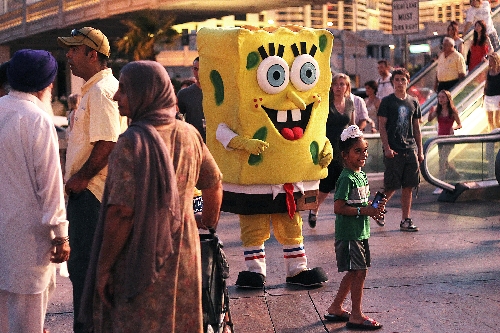 As you pass the costumed characters standing along the street, you can be tricked for a moment into feeling that you’re at Universal Studios.

Then you see the glimmering neon overhead and the tip jars beside Mickey Mouse, Luigi and Princess Leia, and you’re reminded that you’re on the Strip.

It’s a place where musicians play on the skywalks, artists spray-paint canvasses, unlicensed vendors hawk bottled water and T-shirts, and handbillers smack smutty cards and fliers while poking them at pedestrians.

Casinos have made a science of making money from visitors who have traveled thousands of miles for the privilege.

Outside the resorts, the peddlers are working on the same principle. Yet they often are deemed renegades, riff raff and beggars who clog the sidewalks and tarnish the image of Las Vegas — the entertainment capital image, not the Sin City one.

Some casino officials and several Clark County commissioners want to crack down on street peddling, saying it has gotten out of hand. Suggestions include stricter permitting, creating a taxing district to fund more law enforcement, and putting X-rated pamphlets in newsstands and hotel rooms to eliminate the pesky card-slappers.

Commissioners plan Tuesday to discuss how they might go about increasing regulations on vendors and improving trash cleanup on the world-famous Las Vegas Boulevard.

On a sweltering night last week, two men dressed as “Star Wars” storm troopers in white plastic body armor take a break at a corner restaurant. Their faces are coated with sweat from wearing helmets for hours.

Neither would give his full name. They said they had to stay anonymous for “safety” reasons. Other performers stay anonymous because of fear of the IRS.

They described themselves as real performers who have a good relationship with cops patrolling the Strip.

You might think they all would strongly oppose any regulations to control their business. But you would be wrong. They support formal regulation of the costumed street trade, noting there is none now. A permitting fee would weed out the vagrants who don outfits and aggressively hassle pedestrians for tips, they said.

“We’re all for it — anything that can regulate it and make it better,” said Charles, who works two other jobs besides his storm trooper act.

True street performers have an etiquette that vagrants in cheap costumes ignore, such as not blocking a pedestrian’s path and not acting snippy if someone doesn’t tip after taking a picture of them, said Mick, who contends the “riff raff” give performers a bad name.

Both men said they spent thousands of dollars for their costumes.

Mick said he was laid off last year and that this was how he pays his bills.

“Right now this is it,” Mick said. “There are good nights; there are bad nights.”

Those street performers who favor some controls appear to have an ally in County Commissioner Steve Sisolak.

Sisolak said he recently walked the Strip, something he rarely does, and was disturbed by some of what he saw.

Hawkers impeded pedestrians, trash overflowed from cans and littered the streets, and a sticky residue from spilled drinks coated stretches of pavement — all of which is bad for a place that’s promoted as a tourism mecca, he said.

“It’s beginning to cause a distraction to the tourists,” the commissioner said, adding that it’s vital for visitors to have a pleasant experience.

Sisolak and Commissioner Lawrence Weekly have requested that the County Commission discuss how to better regulate the peddling.

Sisolak also wants to explore whether the county should spend more money on upkeep, such as scrubbing the pavement, picking up litter and emptying trash cans more often.

Keeping the Strip clean and safe should be a priority, he said.

“It’s not a flea market,” Sisolak said. “It’s the economic engine for the state.”

Sisolak has suggested that the county look into forming a special taxing district to pay for beefed-up code enforcement and security. These officers could bust the unlawful vendors, freeing the police to deal with violent crimes, he said.

But he added that he really doesn’t know the best solutions.

For that reason, he wants to bring together interested parties to make a coordinated effort, he said. They would include casino executives, police, health officials, the district attorney, state labor regulators, immigration authorities and advocates for the poor.

Resort officials: More must be done

Representatives from MGM Resorts International and Caesars Entertainment, the Strip’s two biggest players, agreed that more must be done.

“Our company is interested in any community discussion that might result in making the Strip corridor a safer, more appealing, more efficient place for our employees to work and our guests to enjoy,” MGM officials said in a statement. “A constructive discussion of common concerns among the various private operators and county departments could prove beneficial to all.”

Caesars spokeswoman Jan Jones said the company would be open to a special tax if the stepped-up patrols will help keep the Strip visitor-friendly.

However, everyone concerned should look at other solutions besides “another enforcement fix-it,” she said.

Unlike commissioners and the mainline street performers, the casinos aren’t calling for the performers’ ouster from the Strip.

Jones said Caesars doesn’t have a problem with costumed performers because tourists enjoy them and they add a fun element to the Strip.

Jones said even those selling bottled water in ice chests probably are providing a good service on a hot day, although Sisolak thinks more oversight is needed on all vendors, especially those who sell water.

These people have been known to fill the bottles with water from who-knows-where, glue the caps as a fake seal, and sell it as if it were fresh, he said.

“No one knows where the water comes from,” Sisolak said.

Caesars’ biggest beef is with the intrusive card-slappers, who hand out fliers advertising in-room dancers and escort services, she said.

An older, bespectacled man did a quick maneuver to avoid them. A young man took a flier that a handbiller jabbed at him.

“Don’t want it! Woo!” he shouted before flinging it into the air.

Past attempts to ban these crews from the Strip failed after the Nevada Supreme Court ruled several years ago that they had a constitutional right to pass out the leaflets on public thoroughfares .

However, the ruling allowed the government to regulate the time, place and manner in which the handbillers can operate, Jones said. That means the county could limit the hours and the number of card-slappers who can gather in a particular spot.

For some reason, the county has never enacted such rules, she said.

Perhaps the best way to eliminate the card-slappers is to give the companies other means for advertising the services, Jones said.

They could put pamphlets wrapped in opaque plastic and marked triple-X in hotel rooms, she said. And they should be allowed to bid for space in newsstands, she said, adding that three companies now have a lifetime lock on all the Strip’s newsstands.

Sisolak said Jones’ suggestions seem valid and could be part of the roundtable discussion he seeks.

Linda Lera-Randle El, a homeless advocate who has been in Las Vegas since 1958, said she has never seen so much street peddling on the Strip as now.

The unlawful vending reflects the hard economic times, making it a complex problem, she said.

Many people do it as a second job to supplement income, and many have lost their jobs and seek quick cash to survive, she said.

“You’re supposed to buy a vendor’s license,” said Lera-Randle El, who has worked for years to aid the homeless. “We don’t advocate anarchy. But what do you do if you can’t afford a license and you need to feed your family?”

People should be allowed to make a buck as long as they aren’t interfering with others, she said, adding that some rules might be necessary but not a heavy-handed crackdown.

“People are just doing whatever they can to survive,” Lera-Randle El said. “I’d rather see people out there in a costume rather than running into a 7-Eleven pointing a gun.”