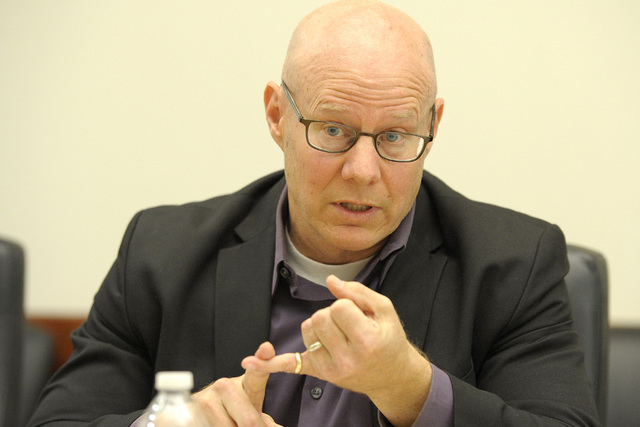 Jacob L. Snow, Henderson city manager, speaks during an interview with the Review-Journal editorial board on Thursday May 15, 2014. (Mark Damon/Las Vegas Review-Journal)

Henderson city employees could be fired for talking to a news reporter under a new and highly unusual policy.

Media and civil-liberties advocates criticized the clause as an effort to control the news and intimidate employees.

The policy makes Henderson unique in Clark County, where no other city nor the county itself threaten to fire employees for speaking.

City Manager Jacob Snow, who approved Henderson’s “media contact and response” policy in September, said he did not recall the firing clause.

But Snow said he was not surprised or concerned by the language and wants all media questions referred to official spokesmen.

Snow said the city has not fired or disciplined anyone for talking to a reporter and added he would be surprised if anyone were fired. He said only “very irresponsible” comments, such as releasing confidential information, would warrant firing.

But even if the city never carries out the threat, advocates said, it’s likely to make employees afraid to talk about routine matters — or to blow the whistle on improper actions inside government.

“It’s not just a threat to employees,” said Barry Smith, executive director of the Nevada Press Association. “It’s really a threat to the media as well: ‘Hey, don’t talk to our employees, because if their name shows up in your story, we’re going to take it out on them.’ ”

That hurts not just the media but residents who rely on journalists to be their “eyes and ears,” Smith said.

Tod Story, executive director of the American Civil Liberties Union of Nevada, said employees should be protected from retribution so long as the information they share is true.

“You end up chilling a lot of speech that could occur between public employees and the public they represent,” Story said.

Snow said the rest of the new policy, which orders employees to refer all questions to spokesmen, is simply a matter of good management. Reporters might call the wrong person, Snow said, and some employees unused to dealing with the media might be “intimidated” by questions.

“The city is a house of order, so we’re going to do things in an organized fashion,” Snow said.

The new policy was obtained by the Review-Journal under a public records request.

The end of the three-page document, under the heading “Discipline,” reads: “Any employee who speaks with the media in their capacity as a City of Henderson employee without authorization from the (communications office) or who violates this (policy) will be subject to discipline up to and including termination, and any other remedial action deemed appropriate by the City.”

Michael Hengel, editor of the Review-Journal, criticized the policy and wrote, “Unfortunately, it’s not out of character for Henderson. Residents should ask themselves how the city is served by such a third-world policy. City employees are fully capable of speaking on their own behalf, and in many instances can speak more knowledgeably and accurately than anyone else. So why do their supervisors or elected leaders want to muzzle them?”

The previous policy, adopted in 2002, had no clause about discipline or firing.

City spokesman Bud Cranor, who helped write the new policy, said officials were concerned about the possible release of confidential information. But he could not recall a specific problem that led the city to add the discipline clause.

Smith said Henderson’s threat is an extreme example of a broader trend over the past 20 years as government agencies have sought to control media coverage and limit reporters’ access.

Cities frame the policies as making sure journalists get the answers they need.

“We want to make sure that we’re providing accurate and consistent information,” Snow said.

But Smith said reporters — and the public — often don’t get the best or most complete information when it’s first channeled through a spokesman.

“So the ultimate effect for the public is they get the doctored version, the cleaned-up version, the official version,” Smith said.

He added: “(If you) want to know what’s going on with a traffic light, wouldn’t it be better to talk directly to a traffic engineer?”

Henderson attempts to tightly control media access to employees. The city employs a communications director and public information manager, who both make more than $100,000 a year. There also are four public information officers who make $97,000 apiece, and the city is hiring a fifth.

Media calls to even senior city officials, such as the city clerk or city attorney, routinely result in return calls from spokesmen.

And when employees are allowed to speak with the media, PIOs usually sit in or even listen in on the phone.

But it’s far less common to threaten to fire employees. In fact, several other local governments encourage employees to answer reporters’ questions when they can.

“If an employee is familiar with a news reporter’s question(s) about routine information (hours of operation, number of clients served, etc.) they should respond promptly and accurately,” Clark County’s policy says.

North Las Vegas’ policy has almost identical language, and neither says anything about disciplining employees for speaking.

The city of Las Vegas doesn’t have a written policy, and employees can talk to reporters without asking for permission, spokesman David Riggleman said. He added that employees who don’t know the answer to a question are advised to refer reporters to another source.

Aaron Baker, a Mesquite city spokesman, said employees sometimes answer media questions and let spokesmen know afterward. He would prefer that happen beforehand when possible, he said, but the city has never seen the need for a discipline policy.

Though Snow said Henderson would only fire employees in extreme circumstances, the policy’s language is broad, leaving it in his discretion.

Employees represented by unions are protected because of contracts that govern discipline and firing, said Dan Pentkowski, president of Henderson Fire Fighters Local 1883. But nonunion employees could be fired if they displease the city manager or other supervisors, even if what they tell a reporter is true.

No city elected official who responded to an inquiry expressed any concern over the new policy.

“The PIO wants to make sure that whatever the message is is the correct message,” Councilwoman Gerri Schroder said.

Mayor Andy Hafen said he had no problem with the firing clause and no one had complained to him.

Eddie Hamilton, a candidate for City Council, called the threat to fire employees “un-American” and said it showed the city was trying to hide something.

City officials say employees can talk to the media; they just want to control how and when that happens.

“We want people whose job it is to deal with the media not to be circumvented in that job or undermined in that job,” Snow said.