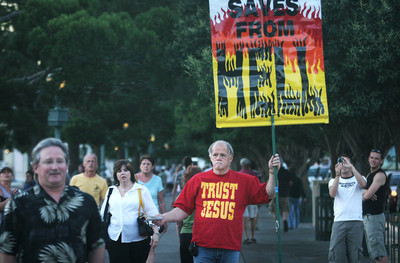 For those who wish to carry signs on Strip sidewalks, size no longer matters.

In February 2006, two street preachers filed a federal lawsuit after they were arrested for carrying signs that exceeded their body widths. They dropped the lawsuit Wednesday, nearly two months after Clark County commissioners changed the ordinance that led to their arrests.

The preachers, Jim Webber and Tom Griner, argued that the ordinance violated their constitutional rights to free speech and free exercise of religion. They were represented by lawyers from the American Civil Liberties Union of Nevada.

“They are out there doing what is the quintessential First Amendment activity, which is standing on the corner preaching and telling people that unless they repent, they will go to hell,” said Allen Lichtenstein, general counsel for the ACLU of Nevada. “Clearly it is activity that is at the core of First Amendment values, and equally clear was the fact that they were not obstructing any pedestrian traffic whatsoever.”

The May 2005 arrests of Webber and Griner were based on a Clark County ordinance that prohibits obstructive uses of Strip sidewalks.

“This law as it was at the time was used as a censorship tool, and that is why we at the ACLU of Nevada became involved,” Lichtenstein said.

Before it was amended, the law included the following definition of an obstructive use: “carrying banners or signs which protrude beyond the person’s front or rear or which exceed the person’s body width.”

In April, the County Commission eliminated the language regarding the size of the signs. The law now defines the obstructive use as carrying a sign that “actually causes an obstruction on the sidewalk.”

“It is legitimate for the county to have laws preventing obstruction. It is illegitimate to use those laws as a pretext for censorship when no obstruction is occurring,” Lichtenstein said. “We commend the county for realizing this fact and amending the unconstitutional ordinance to a form that now protects the legitimate interests of the county while not trampling on the public’s First Amendment rights.”

Deputy District Attorney Robert Gower, who represented the county in the case, could not be reached for comment Wednesday.

Webber, 62, has lived in Las Vegas for about six years and has worked as a street preacher for four decades. Most nights, he positions himself with a sign in front of the Bellagio.

He likes the spot because it has a “nice, wide sidewalk” and exposes him to people from all over the world.

“There’s no better place on the planet earth to do my type of ministry,” he said.

Griner, who now lives in Reno, and Webber were arrested together in front of the Bellagio. Their charges were later dismissed.

Webber said he tries to abide by the laws and already had reduced the size of his signs before his arrest. On Wednesday, he returned to his favorite Strip locale, for the first time since his arrest, with a sign that exceeded his body width.

He carried a 38-inch-wide sign with the message “Trust Jesus” on one side and the message “Jesus Saves From Hell” on the other.

Webber acknowledged he has carried more provocative signs, such as one that warns “Jesus mockers, baby-killing women, ‘homos,’ drunkards, liberals, Mormons” to repent.

Webber said he feels no hatred for any of the groups on his warning sign and does not believe in discrimination.

He said other Christian leaders espouse the same beliefs but avoid controversy by advocating their positions behind closed doors to people who agree with them.

“I just happen to show up in a public forum,” he said.

Lichtenstein said he hopes police and other authorities will read the revised ordinance “and understand that the obstruction laws cannot be used as a pretext to silence unpopular opinions.”

“Over the years, the ACLU of Nevada has fought to protect the rights of the public to exercise their constitutional First Amendment right to free speech on the streets and sidewalks of Las Vegas and Clark County,” Lichtenstein said. “Unfortunately, despite the numerous court decisions that have reaffirmed this right, there are still those both in and out of government that attempt to violate free speech rights of the public on the sidewalks, particularly on the Strip.”