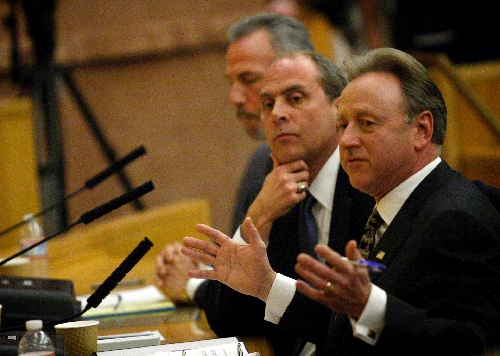 Three local attorneys vying to become Clark County’s next district attorney were asked Tuesday to weigh in on the public’s perception of themselves, a question that particularly stuck out from the legal discussion.

During a 4½-hour marathon of questioning by the County Commission, Steve Wolfson, a Las Vegas city councilman and defense lawyer; John Hunt, former county Democratic Party chairman; and Drew Christensen, county director of appointed counsel; presented their views on the coroner’s inquest process, the death penalty, fatal shootings by police and how each would handle being the county’s next top prosecutor if appointed.

And then they spoke about themselves.

Christensen made the case that although the public might not know his name as well as the other two candidates, he is a courthouse insider known in legal circles and understands how county management functions.

Wolfson’s comments about how the public perceives him addressed previous comments that he is aloof.

"Am I arrogant? Well, maybe a little. Am I aloof? I don’t think so," Wolfson said. "My kids don’t think I’m aloof. I’m just confident I think, and I’ll bring that confidence to this office."

Hunt seemed to dance around that portion of the multifaceted question asked by Commissioner Tom Collins, focusing instead on the district attorney’s office "overcharging of poor people and minorities at large."

Hunt said it’s a waste of time and energy to pile up criminal charges when it’s not necessary.

Commissioners didn’t give any hints Tuesday on how they felt about each candidate. That discussion will occur when the board reconvenes for a special meeting at 1:30 p.m. Jan. 24 to decide who will become the next district attorney.

The public didn’t ask a lot of questions. Instead, dozens of people came forward to express their support for particular candidates, overwhelmingly for Hunt. The public input component seemed to showcase Hunt’s networking and organizational skills as the former party chairman.

Some who pleaded with the commission to appoint a particular candidate had judicial or legal ties, some were politically active, others were business owners, and still others were those who know the candidates on a personal level outside of the legal realm.

All three candidates expressed their interest in running for election once the 3½ years of the unexpired term are up.

All three candidates also seemed to agree they want to change the district attorney’s role in the coroner’s inquest process with a more hands-on approach by sending investigators or representatives to scenes of fatal shootings by police and being briefed almost immediately.

"Never second-guess a police officer for a split-second decision," Hunt said. "But you have to implement if the criminal justice system dictates; there’s no other rational solution."

All three candidates agreed they would reserve capital punishment for "the worst of the worst" offenders.

At the beginning of the meeting, Hunt choked up when he talked about the opportunity to become the next district attorney falling so closely to the death of his longtime law partner Christopher Raleigh over the weekend.

Wolfson repeatedly pointed out his being the only candidate to serve as an elected official and his almost eight years on the Las Vegas City Council.

Commissioner Chris Giunchigliani disclosed that her husband, political consultant Gary Gray, has worked with Wolfson, that Hunt used to be a constituent and that she has worked with Christensen on inquest matters.

Her questions focused on what she called "a culture of change" by boosting office morale and including more minorities in the office.

The district attorney manages a $65 million budget and more than 700 employees, including 150 deputy district attorneys who handle about 65,000 cases annually. The job pays $182,100 a year.