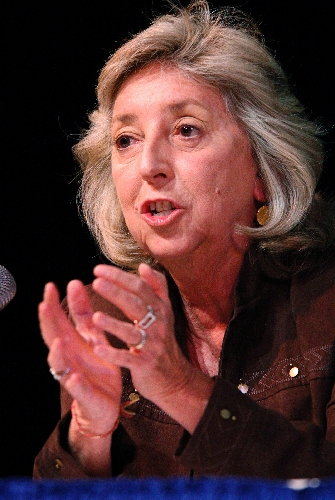 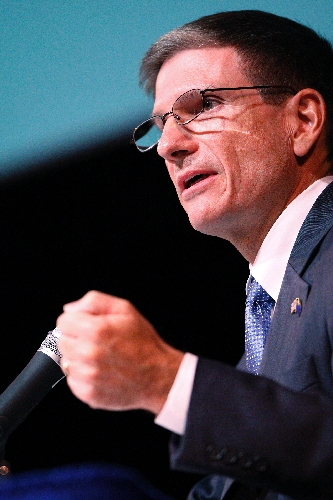 Democratic Rep. Dina Titus and Republican challenger Joe Heck got a chance to talk face-to-face Saturday about issues facing voters in Nevada’s 3rd Congressional District and to get beyond the 30-second political ads that have thus far defined the campaign.

Titus and Heck batted back and forth on about a half-dozen questions before an audience of about 200 at College of Southern Nevada’s Cheyenne campus in North Las Vegas.

Public opinion polls show the candidates in a dead heat, and theirs is among the nation’s most watched races for a House of Representatives seat.

The event, sponsored by the Asian, Latin and Urban chambers of commerce and the college’s student government, focused on issues of education and small business with Heck painting Titus as beholden to government-oriented solutions and Titus suggesting Heck’s criticism is rooted in partisan talking points, not fact.

In his opening statement Heck talked about his experience as a parent, small-businessman, physician and Army reservist. He said one of his daughters recently graduated and can’t find a job in her field, while another daughter was laid off when her company downsized.

Titus used her opening remarks to humanize her image and explain what she achieved during her first term in Congress.

“Just call me Dina, that’s what everybody else does,” Titus told moderator Jeremy Aguero before citing efforts to help people fighting home foreclosures as well as delivering millions of dollars in help for senior citizens, veterans and small businesses.

Titus also spoke of her family’s background in small business, including her father’s convenience store and motel.

“It is my job to help create jobs, to pull us out of the deepest recession we have seen in over a generation,” Titus said. “I think I know these issues firsthand.”

“My concern is that, like some of the other programs that have been passed, it is too difficult or too restrictive for small businesses to actually get access to the money,” Heck said.

Titus said she voted for tax breaks for small business, but did not support the bill.

“This was another bank bailout,” she said. “I felt like this was not the way to get money flowing back into the market.”

“We have got to bring that down in the long run,” Titus said. “In the short run, though, we have to invest in our economy; the best way to bring down the deficit is to grow the economy.”

She also accused Heck of wanting to save money by cutting the U.S. Department of Education, which Heck said is untrue.

“She voted for every appropriations bill that came through,” he said. “We’re mortgaging the futures of our children and grandchildren with wasteful spending.”

The debate got testy as the candidates answered a question about the Patient Protection and Affordable Care Act, the health insurance overhaul law that Titus supported and Heck opposes.

Heck said some of the provisions would be onerous for businesses; Titus countered that firms with fewer than 50 workers would not have to do or pay anything.

“Senator Heck,” Titus said, referencing Heck’s status as a former state senator, “you are entitled to your own opinion but not your own facts.”

For public schools, Heck emphasized that he thinks principals, teachers and parents should have more control and there should be a process to fire bad teachers.

“We need to put more of the responsibility back at the local level where principals, teachers and parents are involved,” he said.

Titus said evaluation of student achievement should be broadened to ensure teachers aren’t punished for student performance issues they can’t control. She also said too much education funding is competitive, and school finance should be more formulaic.

“When you are crawling along the bottom it is very hard to race to the top,” Titus said, describing how she thinks punishing poorly performing schools can make matters worse.

In closing, Titus admonished the audience in the Horn Theater, which appeared to be dominated by Heck supporters who at one point briefly booed as she spoke.

“I thought it was going to be a little more serious discussion about issues, but that’s OK,” she said. “A little rally never hurts anybody.”

Heck closed by criticizing Titus for voting too often with House Speaker Nancy Pelosi, D-Calif., and concluded with a refrain from his opening statement:

“Are you better off now than you were two years ago?”