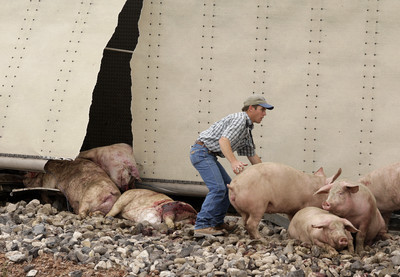 Death came sooner than expected for 47 pigs en route to a slaughterhouse Thursday, when the truck transporting them rolled over on a valley freeway interchange.

The 79,000-pound truck was traveling the entrance ramp to southbound Interstate 15 from westbound Interstate 215 when it overturned, crushing a guardrail and coming to a stop on an overpass.

For nearly three hours, some of the 160 pigs trapped inside the two-story trailer of the big rig squealed loudly as authorities waited for the arrival of another trailer to transport the hogs. Nearly a dozen pigs had escaped through a crack in the roof of the trailer during the 9:55 a.m. accident, and officials feared that more would get loose.

“I wouldn’t say this is common, but it’s not the first,” said trooper Kevin Honea, spokesman for the Nevada Highway Patrol.

Bystanders watched three pigs, their heads stacked on one another and extending from the back door of the trailer. The pig on the bottom made seizurelike movements, repeatedly bucking its snout violently up and down while squealing. Then, for a short time, its body would fall still.

“It’s a really bad situation, but there’s no other solution,” said Xenia Duranovic, inspector with the State Department of Agriculture. “If they all started running around, God knows how many wrecks you’d have. This is just a bad thing in a bad spot.”

The crash cracked the welding connecting the trailer’s floor and sides, preventing officials from pulling the truck upright. The weight of the livestock could have caused the crack in the trailer to widen, allowing more pigs to escape and endangering nearby motorists, Honea said.

Officials also were concerned the pigs’ movement might break the vehicle’s fiberglass roof, causing the animals to tumble onto the rocks beneath the overpass.

“If more pigs get out we have an even bigger problem,” said David March, a supervisor with Clark County Animal Control.

Five more pigs escaped about 90 minutes after the crash, when two tow trucks pulled the rig four or five feet onto the road to prevent it from falling from the overpass.

The trailer lurched as the tow trucks pulled it over the crushed guardrail and onto the pavement, breaking the legs of several animals. The pigs’ dirty, bloodstained faces watched officials and shrieked as their limbs, caught in the holes on the side of the trailer, were crushed.

“We’re trying to keep them calm, pigs have a herd mentality and when one gets excited, they all do,” said March, holding a lasso to secure the loose pigs.

The dozen or so pigs that escaped from the trailer lay calmly on the rock landscaping near the overpass.

At 1 p.m., crews arrived with trailers to transport the hogs. Workers used vehicles and nets to form a makeshift corral and keep the animals from going on the highway. One by one they dragged the animals out of the truck.

Those that were still alive were moved to the trailers. Injured pigs were euthanized at the scene. And the dead pigs were piled to the side of the overturned trailer.

The surviving 113 pigs were taken to R.C. Farms in North Las Vegas.

The pigs, which were being transported to a slaughterhouse in Vernon, Calif., by Gurney Trucking, had an estimated value of $50,000 to $60,000, said a driver with the Utah-based trucking company who asked not to be named.

He had just arrived with the pigs in Las Vegas from Utah, before turning the rig over to another driver.

Handling livestock is difficult because it is not a “stiff cargo,” he said. When animals move back and forth the trailer leans with their weight.

He estimated that the hogs made up nearly 60 percent of the truck’s weight.

The cause of the accident remained under investigation, Honea said. There is no evidence that drugs or alcohol were a factor in the incident. Initial investigations ruled out mechanical failure and Honea said the driver might have been going too fast.

The driver of the truck was taken to Sunrise Hospital and Medical Center for minor injuries.

The ramp was closed to traffic for seven hours.