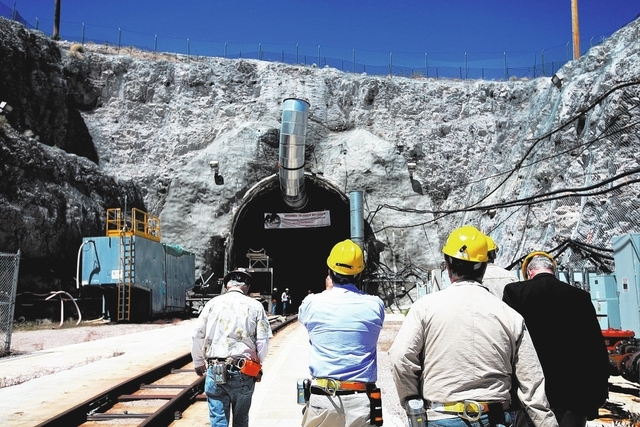 Members of the House Energy and Commerce Subcommittee on Environment and Economy and staffers go on a tour of Yucca Mountain in a rare field trip of the shuttered nuclear waste site on Apr. 26, 2011. (Jessica Ebelhar/Las Vegas Review-Journal)

For nearly three decades, most Nevada leaders — Republican and Democrat — have opposed allowing the federal government to carry out a plan to build a high-level nuclear waste repository at Yucca Mountain, about 100 miles from Las Vegas.

In 2010, the Obama administration zeroed out the project’s budget, thanks in part to U.S. Senate Majority Leader Harry Reid, D-Nev., who has led the opposition of Nevada’s congressional delegation, which opposes the project unanimously.

U.S. Rep. Steven Horsford, D-Nev., who represents the proposed site in Nye County as part of the vast 4th Congressional District, has come out firmly against it — even while campaigning in the rural area where many local officials and citizens wouldn’t mind having the project — and the accompanying jobs and millions of dollars in potential revenue — in their back yard.

But the top two Republican candidates vying for the right to replace Horsford said last week they’re both in favor of storing the nation’s high-level nuclear waste at Yucca Mountain as long as it can be done safely.

The topic came up during a Thursday night debate in Mesquite, a conservative rural town about 170 miles from Yucca Mountain. Clark County and the cities of Mesquite, Boulder City, Henderson, Las Vegas and North Las Vegas all have gone on record opposing the project. Still, some folks hit by the recession and looking for jobs favor bringing it here anyway.

Assemblyman Cresent Hardy, R-Mesquite, said during the debate, “I don’t think there’s a better place for it.”

“My belief is if it passes all the criteria of safety of the state of Nevada, I think it’s a great area for it,” Hardy said, speaking to an audience of more than 70 people at the Mesquite Veterans Center. “I believe that it actually can create many new jobs in the state of Nevada. … If Nye County wants it then we start moving forward. I believe it’s a great spot for economic development.”

Nye County officials have come out in favor of the project, in fact, and have fought a losing battle for decades. They’re eyeing the possibility of 3,000 jobs during construction and about 1,500 permanent jobs.

Niger Innis, a civil rights advocate competing in the June 10 GOP primary for Horsford’s seat, said he long has been a proponent of “an all-of-the-above energy strategy” for the United States, including coal, nuclear, gas as well as “green energy” such as solar, wind and geothermal. He said he traveled the country promoting the idea a few years ago.

Innis lamented the planned closing of the Reid Gardner coal-fired power plant in Clark County by the end of 2014. And he blamed Reid and Horsford for focusing too much on green energy and not enough on fossil fuel development.

As for the proposed nuclear facility at Yucca Mountain, Innis said, “I agree with Cresent” that it should be built as long as it’s proven safe. And he advocated for an information campaign to persuade opponents to back the project.

The Republicans’ campaign rhetoric is in strong contrast to what Horsford said while campaigning in late 2013, while in Pahrump in Nye County, according to a report in the Nov. 13 edition of the Pahrump Valley Times.

“As you know, the State of Nevada’s last appeal to stop the NRC from releasing the Safety Evaluation Reports regarding Yucca Mountain was thrown out by the court of appeals,” Schinhofen said. “I was wondering when or if you would join with the seven rural counties that have signed a resolution calling on the NRC to release the safety evaluations report that costs us $15 billion over 30 years time so we can finally put this to rest?”

In rural Nevada, Horsford was wise to invoke the popular Sandoval instead of Reid, who isn’t well liked in conservative country.

U.S. Sen. Dean Heller is a car guy going way back. The son of a Carson City garage owner, he grew up with grease under his fingernails and a love for four wheels, the faster the better. At 53, he still competes on road courses and is testing out a Camaro GT1. If he met Joe Gibbs, he would more likely talk racing than Redskins.

So among U.S. senators, the Nevadan brought a unique perspective when he sat as the ranking Republican on the Senate consumer protection and product safety subcommittee that questioned General Motors CEO Mary Barra last week. The executive was barraged about the company’s botched handling of a faulty ignition switch on some of its models that has been linked to 13 deaths.

“Ms. Barra, you know I have raced cars for years,” Heller said by way of introduction. “I have used GM testing facilities on some of the cars I have raced. I have blown engines, broke transmissions, broke rear ends, lost my brakes, throttle stuck and ignitions quit on me. I tell you this because we break these engines down, those transmissions down, to find out exactly what the integrity of those parts are, how they broke and why they broke.”

That said, Heller said it was “highly unusual” for GM to change the ignition switch part as it reportedly did in 2006 or 2007 but not change the part number. After a decade of inaction, the company has recalled 2.2 million Chevy, Saturn and Pontiac models because it cannot be sure which cars have bad parts and which have good ones.

GM said it was an error, but Heller and other senators sensed a cover-up to disguise problems that emerged at a time the company was struggling financially. GM ultimately benefited from a taxpayer bailout of $49.5 billion in loans in exchange for 61 percent temporary government ownership.

Heller suggested General Motors might not have survived had it commenced a major recall at the time, and the company might have known that.

“It looks like there were multiple moments where the company had conflicts of interest with initiating a recall at a time when GM was not financially sound or when the government owned 60 percent,” Heller said.

The automaker is in the midst of an internal investigation that Barra said could be completed in 45 to 60 days. Heller said he wants to bring GM back to Congress at that time for more questioning. 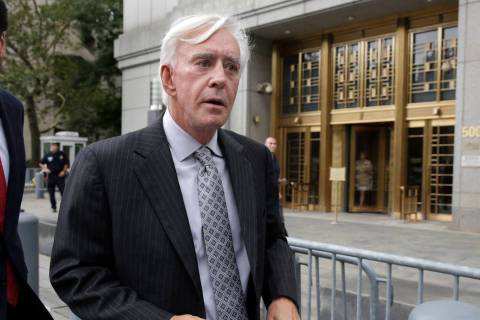 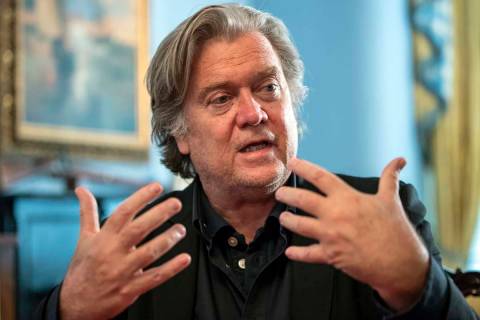 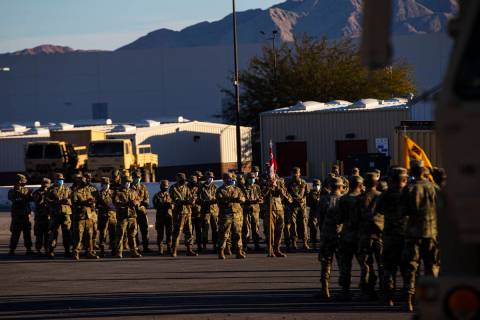 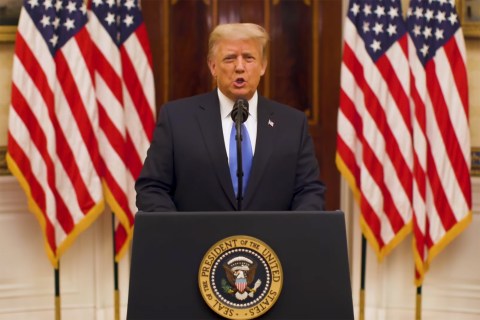 President Donald Trump released a pre-taped 20-minute video to serve as his farewell to the American people as President-elect Joe Biden arrived at Joint Base Andrews Tuesday afternoon.