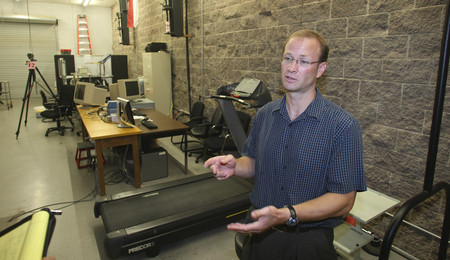 We like to believe that we are in charge, and perhaps we are.

But maybe our lives are a series of plot twists that get written purely by accident and happenstance. We’re just making minor edits.

Like, what if you hadn’t signed up for the one class in college that changed everything? What if you weren’t late for that once-in-a-lifetime job interview or didn’t go to the party where you met the love of your life or never fell in with the wrong crowd back in middle school?

Take John Mercer, for example. He’s a big shot researcher over at UNLV, the associate dean at the School of Allied Health Sciences.

The decisions he makes affect millions in grant funding, the future of promising students, the course of entire departments at the university.

And yet, if not for a random event 20-some-odd years ago — he was talked into becoming a human guinea pig — Mercer could have ended up as that guy in his 40s who still wears surfing shorts, has a great tan and has more to look back on in his life than to look forward to.

“It’s been a funny route, getting here,” Mercer said the other day in his fifth-floor office, the windows of which overlook most of the University of Nevada, Las Vegas campus.

Mercer, 45, is from New York. As a young man, he was really into bicycling: the Lance Armstrong kind, not the X Games kind.

He graduated from Buffalo State College with a degree in industrial technology. And then … not much. He hadn’t a clue what his degree would help him do with his life.

So, he got a job coaching a high school freshman swim team (he’d been a swimmer in college).

He also got a job as a lifeguard at the Hofstra University pool. He got to chatting one day with another cyclist he met at the pool, quite randomly.

That cyclist told him about a research study being done at Lenox Hill Hospital in New York City. Researchers were studying sports drinks and how they affect elite athletes. He encouraged Mercer to apply as a research subject.

Mercer thought that sounded cool. He’d make a few bucks, and he might learn something that would make him a better cyclist. So he signed up.

They ran him hard. They put his body through stress. They’d make him sit there for three or four hours afterward while they tested his blood and monitored his heart rate.

He’d have nothing to do but watch the bleep bleep bleep of the heart monitor. He’d get so bored, he’d try to get his heart rate as low as possible, sometimes down to 35 or 40 beats a minute.

He also talked a lot with the researchers, who seemed like they had the coolest jobs in the world.

“I didn’t know people got paid for this sort of thing,” he said.

Interested, he got a professor at Hofstra to let him sit in on a physiology class. Wow! He loved it. He was hooked.

More schooling followed; a master’s degree and a teaching fellowship in Texas, research and teaching in Oregon, followed by a doctorate degree.

Along the way, he got married, had a couple of sons, realized he wasn’t going to be a world-class cyclist, and settled down.

The UNLV gig came in 1999, the year he got his Ph.D. Along with teaching and his administrative duties, he studies how bodies move — especially the bodies of runners, especially when they’re running, and especially what those bodies are doing while running that might be done better.

His goal? To lessen the injuries that are so common to runners.

He studies shoes and gait and force in a fancy lab at UNLV. He teaches students who go on to work at the big shoe companies or who go on to conduct research of their own.

This has a real effect on the real world, said James Johnston Jr., a local running enthusiast.

“He helps us out a lot,” said Johnston, who manages The Athlete’s Foot, a shoe store, and advises the Rockin’ Runners, a marathon-oriented running club. “It’s the words of wisdom that really keep those injuries away. With marathons, it’s the little things that can become a big deal.”

Mercer said if you talk to 100 runners, 80 of them will have had a running related injury. Twenty of those 80 will have had to stop running because of the injury.

He tries to figure out how to stop that. He talks to the running group from time to time, helping the runners use their bodies more wisely. Don’t ignore a budding blister, for example, or that nagging but seemingly minor pain in your knees. If you’re going to run a marathon, you’ve got to be in the right shape to start with.

Which is easier to say than it is to do.

Take Mercer, for example. After more than a decade of academics and marriage and raising the boys, he found himself with potentially debilitating health problems. He weighed 220 pounds and was in pain all the time. He was no longer an athlete, but an aging college professor who researched athletics.

He set about to change that.

He began to run again, albeit only for a few minutes at first. Truth be told, he was walking more than he was running. But he was doing something.

Last year, he competed in his first ironman event. That’s one of those events where you swim a couple miles, bike 100 miles and then run a marathon. All in the same day.

Ask him how he did.

Which is kind of a big deal for a guy in his 40s who might never have gone back to his roots as an athlete if he hadn’t been diagnosed with rheumatoid arthritis, a diagnosis he said forced him off the couch and back into his running shoes.