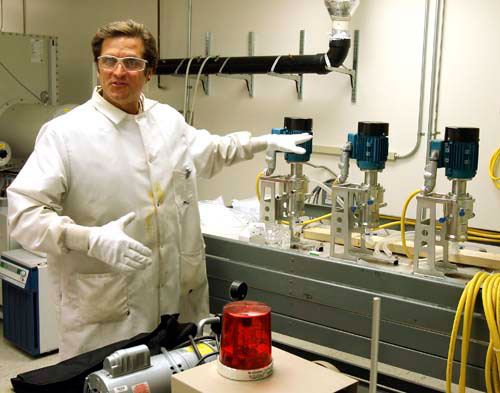 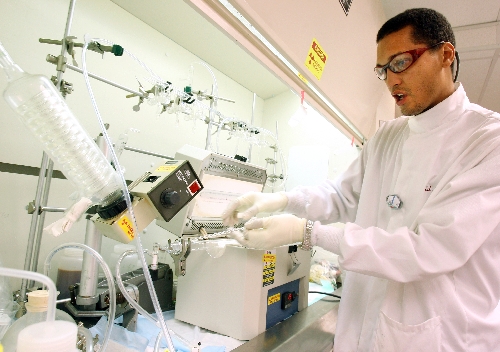 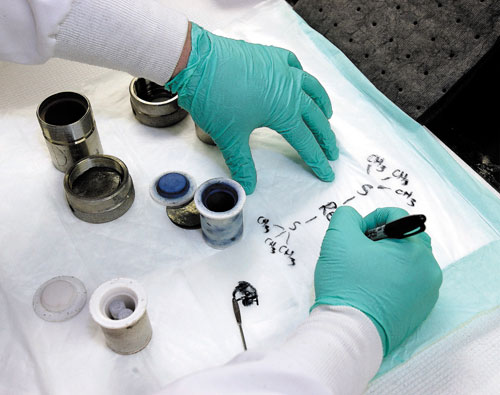 “If we knew what we were doing, it wouldn’t be called research.”

With Albert Einstein’s “research” quote glued to the laboratory door, a team of radio­chemistry researchers routinely goes about its work at the University of Nevada, Las Vegas in hopes that someday they really will know what they have done and it will make a difference.

The team led by associate professor Ken Czerwinski is exploring new ways to reprocess used nuclear fuel so it can be used again, or recycled, instead of sitting in water pools or dry casks at nuclear power reactor sites awaiting disposal in a repository such as what Energy Department scientists had envisioned for Yucca Mountain, 100 miles northwest of Las Vegas.

With that motto from the father of modern physics on their minds, the UNLV scientists work to solve problems of reprocessing, which have so far proved elusive.

If reprocessing questions are answered during the next few decades or sooner, scientists of the future might be able to develop reactors better than the ones countries such as France and Japan are using today to squeeze more energy out of the uranium and plutonium in used fuels to leave relatively less for disposal.

Czerwinski was dismayed by a Maryland-based energy policy group that claimed in a report last month that hopes for breeder reactors and reprocessing of used nuclear fuel have been dashed by the international effort’s poor track record.

“It is only recently, with the failure of the Yucca Mountain program to provide a timely repository …. that reprocessing is now being promoted as a ‘solution’ to the problem of mounting quantities of spent fuel at more than five dozen commercial nuclear reactor sites in the United States,” wrote Arjun Makhijani, president of the Institute for Energy and Environmental Research, in the report titled “The Mythology and Messy Reality of Nuclear Fuel Reprocessing.”

Czerwinski and his team of graduate students aren’t swayed. They are looking beyond today’s problems to the future. Every school day on the ground floor of UNLV’s Harry Reid Center for Environmental Studies, they continue to don safety glasses, booties, gloves and white lab coats to find ways to convert impurities from the fission or atom-splitting process into useful compounds and to account for materials that could be used in nuclear bombs.

“This is one of the few university laboratories where you can do this type of work. People from the national labs come here,” Czerwinski said Wednesday.

The goal of the UNLV radiochemistry program — and parallel work being done at national labs at Livermore, Calif., Los Alamos, N.M., Oak Ridge, Tenn., Brookhaven, N.Y., and Argonne near Chicago — is to broaden the scope of nuclear waste reprocessing and “transmutation.”

Transmutation is the technique of taking long-lived radionuclides, such as americium and neptunium, and transforming them into smaller amounts of shorter-lived radioactive materials.

There now is no economic incentive to license and build reprocessing plants, or so-called fast breeder reactors, in the United States. But Czerwinski insists the research must continue or else the seeds of nuclear knowledge that U.S. scientists have sown since the days of the Man­hattan Project during World War II will be harvested by foreign countries.

“If we don’t do this work we would certainly not be a contributing player,” he said. “We’re approaching the point that we’d have to reach out to a foreign vendor to help us.”

Much of UNLV’s reprocessing research focuses on technetium, an element with a half-life of 215,000 years that is one of the by-products of splitting of uranium or plutonium atoms.

In the lab, third-year graduate student Ed Mausolf keeps his mind at rest with jazzy music while he works with tiny amounts of technetium held in glass tubes. It’s just an earshot away from the “beep, beep, beep” of a whole body radiation counter that researchers use to check for unwanted contamination before they leave the building.

Mausolf said that because it takes so long for radioactive technetium to become stable and because it’s soluble in water, it must be kept out of the environment during reprocessing.

When the isotope uranium-235 fissions, 6 percent results in technetium. While Mausolf’s lab work involves only gram-size amounts of the material, industrial applications can amount to tons of waste.

“We need to come up with an option to recover these materials in high efficiency,” he said about the technique he is exploring, described as “tailoring separation.”

Czerwinski said the team is inching its way toward recovering valuable materials from nuclear waste. “In our lab, we’ve plated out uranium metal, which gives promise you can scale this up.”

Across the hall, Erik Johnstone experiments on the fundamental chemical properties of technetium to find ways to make novel compounds from it.

One short-lived isotope known as technetium-99m, which decays in about six hours, has medical uses as an imaging agent, allowing doctors to check how a person’s heart is functioning and to locate cancerous cells.

In addition to basic research to develop new compounds, some radiochemistry work by Czerwinski’s 20-member team will help scientists develop better ways to account for nuclear bomb materials that stem from waste reprocessing and prevent them from falling into the hands of rogue nations or terrorists.